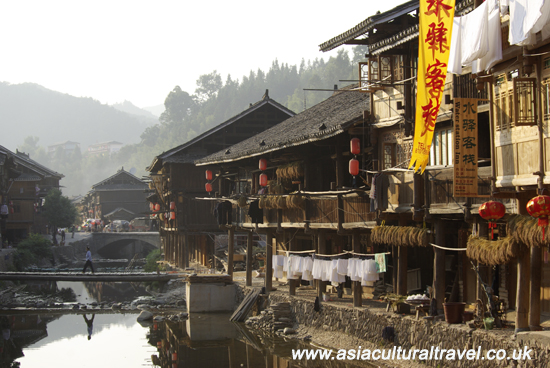 Zhaoxing village is located about 72 kilometres (45 miles) from Liping County Town, Guizhou, and is one of the largest Dong villages in China. Zhaoxing boasts a population of over 4,000 people and 800 households. According to local legend, this village was supposedly founded during the Song Dynasty (960-1279), meaning the village ancestors settled there over 840 years ago.

Zhaoxing is one of the most famous Dong villages in China, in part due to its size but predominantly due to the fact that it has five Drum Towers. Each tower is specially named in order to promote a certain virtue. The first tower is called “Ren”, which means “benevolence”. The second is called “Yi”, meaning “righteousness”. The third is named “Li”, meaning “courtesy”. The fourth is called “Zhi”, meaning “wisdom”, and the fifth is named “Xin”, meaning “faithfulness”. Each tower is different in terms of its method of construction, size, height and external appearance. Of the five towers, the Zhi Tower is generally considered to be the most beautiful. There are also numerous Wind-Rain bridges in the village, which are located on the Nanjiang River that runs through Zhaoxing.

Outside each of the Drum Towers, there are theatre stages and singing platforms. Every night, these platforms come alive with vivid plays and powerful folk songs performed by the villagers. The liveliness and size of this village makes it the perfect place to experience any of the Dong festivals, including the Dong New Year, the New Harvest Festival, the Lusheng[1] Festival, and the Sama Festival. Of all the Dong festivals, the most famous is the 500-year-old festival known as Ni Ren Jie or Ni Ren Festival. This festival is celebrated every year on August 15th according to the Chinese lunar calendar, and takes place in Xiage village, which is about four kilometres away from Zhaoxing. It is normally celebrated after the autumn harvest. During the festival, the Dong people give thanks to the gods for a good harvest and express their love of the earth.

Ni Ren Jie is separated into two parts, referred to in the Dong language as Duoma (playing with mud) and Daoshen (bull-fighting). In the Duoma part of the festival, young, half-naked men will enter a pond that has been specially made for the festival and try to catch fish with their bare hands, which muddies the water. Each time they manage to catch a fish, they will hold it high in the air and the onlookers will loudly praise them. As the young men scramble to catch fish, the pond will become muddier and muddier, until eventually they start daubing mud on the bodies of everyone involved. When all of the participants are completely covered in mud, the Duoma part of the festival ends and the Daoshen part begins.

On exiting the pond, each participant will take their prize bull to the pond for the bull-fighting competition. These bulls are specially raised for this festival alone. They do not plough fields or do farm work of any kind, and are kept on a special diet to make sure they are larger and stronger than normal working bulls. The bulls will either fight within the pond or within a specially made ring near the Drum Tower. After many bouts, the final winner will be chosen and given the title of “Bull King”, which is a precious honour for both the bull and its master. 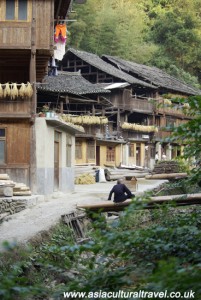 No matter what is happening in Zhaoxing, whether it is a local festival or simply just a regular working day, the locals are very friendly and welcome tourists to come join them. If you still have time and energy after your trip to Zhaoxing, there are six other Dong villages nearby that are also worth visiting. One of these villages, called Tangan Village, is about 7 kilometres to the east of Zhaoxing and is home to the only Dong People Eco-museum. There is also a nearby mountain called Mount Sansui, which rewards any hiker who scales its heights with a stunning view of the surrounding countryside.

Zhaoxing is one of the more accessible Dong villages. You can fly to Liping County from Shanghai, Guangzhou, Guilin and Guiyang. From Liping, there are buses every hour to Zhaoxing and the journey takes about two hours. Alternatively you can take a bus directly from Guiyang to Zhaoxing, which takes about nine to ten hours. There are plenty of guesthouses and a handful of hotels in the village, which are all reasonably priced.

Join our travel to visit the beautiful Zhaoxing Village: Explore the culture of Ethnic minorities in Southeast Guizhou

One Reply to “Zhaoxing”