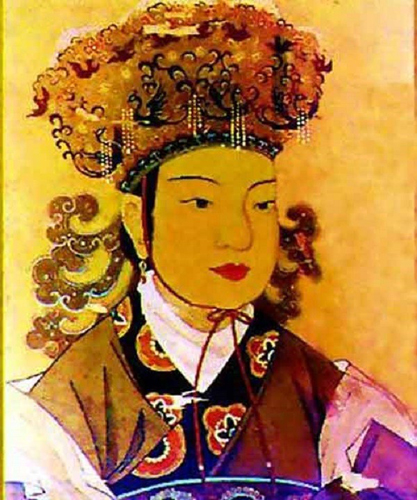 Wu Zetian (624-705) is considered one of the most controversial figures in Chinese history. She broke many customary precedents during her rise to power and even established her own dynasty, which she named the Zhou Dynasty (690-705). She was the first and only woman to have ever ruled China. Her reign was described by historian Liu Xu[1] thusly: “Heaven and earth became like a huge cage, and even if one could escape it, where could he go?”. Her system of secret spies and her ruthlessness in disposing of political rivals led to a reign of terror that is echoed in Liu Xu’s comment. Yet there’s more to her story than meets the eye. In order to understand Wu Zetian as a political figure, you must first delve into the changeable accounts of her history, and then decide for yourself what manner of person she was.

Wu Zetian was originally born Wu Zhao in 624 A.D but the location of her birth is still unknown. Her family originated from Wenshui, Bingzhou (modern-day Wenshui County, Shanxi). Her father, Wu Shihuo, was involved in the timber business and her mother was from the influential Yang family. Compared to other families at the time, Wu Zhao’s family were considerably well-off and so, thanks to the family’s servants, she enjoyed much leisure time. Her father encouraged her to use this time to educate herself, which was incredibly unusual for a woman at that time. Wu focused her attention on studying politics, writing, literature and music. Thanks to these efforts, she became known for her intelligence and wit.

On his travels the nobleman Li Yuan would often stay with the Wu family. Li Yuan eventually overthrew Emperor Yang of the Sui Dynasty and established the Tang Dynasty, adopting the regnal name Emperor Gaozu. After his ascension to the throne he was incredibly generous to the Wu family. He even bestowed a succession of senior ministerial posts on Wu Shihou. This relationship was significant as it was the first connection the Wu family established with the royal Tang family.

When Wu Zhao was only fourteen years old, she became a concubine of Emperor Taizong, Emperor Gaozu’s son. Among the concubines, she held the title of cairen[2]. However, it appears she was not terribly well-favoured by Emperor Taizong and did not bear him any children. This meant that, according to tradition, on his death she was consigned to Ganye Temple and was supposed to live out the rest of her life as a Buddhist nun. Yet Wu Zhao somehow made her way out of the convent and back into the imperial palace. 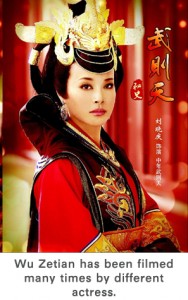 Historians are unsure as to how Wu Zhao left the convent, but sometime in the 650s Wu Zhao found herself back in the imperial palace as Emperor Gaozong’s concubine and was thereby known as Consort Wu. In 652 she gave birth to her first son, Li Hong, and in the next year she gave birth to her second son, Li Xián. This succession of sons, along with Consort Wu’s natural charm and beauty, swiftly made her the favourite of Emperor Gaozong. In light of this, Empress Wang and the Emperor’s previous favourite, Consort Xiao, started conspiring against her.

In 654, Consort Wu gave birth to a daughter, but the infant tragically died. Evidence suggests the child’s death was caused by deliberate strangulation. Consort Wu accused Empress Wang of murdering the child, backing up her allegations with eyewitness accounts. Empress Wang was childless, meaning she may have been jealous of Consort Wu, and she lacked a sound alibi. The death of this child played an important part in Consort Wu’s rise to power, as it encouraged Emperor Gaozong’s eventual decision to depose Empress Wang. Some historians believe that Consort Wu may have even strangled the child herself and then framed Empress Wang. The most likely explanation, considering the poor ventilation system in the palace, is that the child died of asphyxiation.

From 657 onwards, Empress Wu began a campaign against any official who opposed her. She would have associates falsely accuse her political rivals and then subsequently depose, exile, or execute them, or force them to commit suicide.

In 660, Emperor Gaozong’s health began to deteriorate. He suffered from painful headaches and loss of vision, which some historians believe was the result of Empress Wu slowly poisoning him. Emperor Gaozong’s ill-health prevented him from ruling effectively, so he allowed Empress Wu to make some rulings on his behalf. Empress Wu proved herself to be a competent politician, making quick and astute judgements on matters of state.

By 664, Empress Wu’s influence on the governance of the country had angered Emperor Gaozong so much that he had Chancellor Shangguan Yi draft an edict for her deposition. Empress Wu pleaded with Emperor Gaozong, who relented. Shangguan was subsequently executed and, from then on, Empress Wu would sit behind a curtain beside Emperor Gaozong and give him advice during imperial meetings.

Thereafter, Li Hong pleaded with his mother to cease influencing his father’s governance of the country. Historians generally believe that Li Hong’s death in 675 was the result of poisoning by his mother. After Li Hong’s death, Li Xián was created crown prince but this title was to be short-lived. Empress Wu formally accused Li Xián of treason in 680 and he was deposed, exiled and forced to commit suicide by Empress Wu. His brother, Li Zhe, was made crown prince.

In 683, Emperor Gaozong suffered a fatal stroke. Li Zhe (Emperor Zhongzong) ascended the throne but his reign only lasted six weeks. After his disobedience became too much, Empress Wu deposed and exiled him. She replaced him with his younger brother, Li Dan (Emperor Ruizong).

From then on, Empress Wu took charge of governing the country. From 688 onwards, she began systematically hunting down and massacring members of the Li family. In 690, she forced Emperor Ruizong to yield, usurped the throne and established the Zhou Dynasty. She summoned Li Zhe back from exile and named him her heir apparent.

Tragically, in court her cruelty intensified. She even forced two of her grandchildren to commit suicide after a discussion they had about her affair with the Zhang brothers was leaked. When Empress Wu fell ill in 704, she only allowed the Zhang brothers to see her, which led to rumours that they were plotting to usurp the throne.

By 705 these rumours became such a growing concern that, when the Empress fell ill again, a few of the chancellors and Li Zhe plotted a coup. They managed to execute both of the Zhang brothers and subsequently surrounded Wu Zetian in Changsheng Hall, forcing her to surrender. She was made to pass the throne to Li Zhe, who retained his regnal title of Emperor Zhongzong and restored the Tang Dynasty. Later that year, Empress Wu Zetian passed away and Emperor Zhongzong had her remains interred in Qianling Mausoleum alongside her husband.

Throughout her political career, Empress Wu killed numerous potential rivals, including members of her own family. Yet, outside of the palace, she implemented great social change, lowered taxes, supported the development of the fine arts, raised the status of women, and expanded the Chinese Empire. Though it was true she was tyrannical and obsessive in her thirst for power, she was no more violent than many of the emperors before her. It is arguably her gender that has brought attention to acts that would have been perfectly normal for a male emperor and would have gone largely unnoticed. To her subjects, she was regarded as a capable and astute emperor. In her own will she stated: “My achievements and errors must be evaluated by later generations”. Therefore it is up to you to decide precisely what kind of person she was.

[2] Cairen: The fifth rank in the Tang Dynasty’s nine-rank system of officials and concubines

One Reply to “Wu Zetian”