The buildings that make up Jianfu Temple were never intended to be a temple when they were first built. In 684 A.D., after his ascension to the throne, Emperor Zhongzong adapted his place of residence into a temple and donated it, subsequently maintaining it so that it could house 200 Buddhist monks. He founded this temple precisely 100 days after the death of his father, Emperor Gaozong, to honour his memory. It was originally named Xianfu Temple, or the Great Monastery of Offered Blessings, but was renamed Jianfu Temple by Empress Wu Zetian in 690 A.D. The Small Wild Goose Pagoda was built later on, sometime between 707 and 709 A.D., and was so-called simply because it was smaller than the Great Wild Goose Pagoda. The pagoda was originally 45 metres (147 ft.) tall and 15 storeys high but was damaged by the same earthquake as the Great Wild Goose Pagoda in 1556 and is now only 43 metres (141 ft.) tall and 13 storeys high. Unlike the Great Wild Goose Pagoda, each storey on the Small Wild Goose Pagoda diminishes in width as it rises, giving it its iconic curved appearance. However, like many pagodas from the Tang Dynasty (618-907), it is archetypally square shaped. During the Tang Dynasty, Buddhist monks would bring Buddhist scriptures and sutras[2] from India to the temple and the pagoda to be translated. 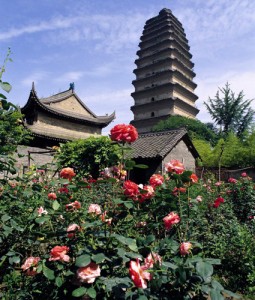 Astoundingly, even in ancient times, architects had the foresight to make the base of the Small Wild Goose Pagoda out of packed earth and built it into a hemispherical shape. This meant that during earthquakes the tremors were distributed evenly throughout the base of the temple and the pagoda subsequently survived 70 earthquakes virtually unharmed. Interestingly enough, in 1487 a colossal earthquake sent a crack all the way up the pagoda, from top to bottom, and this crack was supposedly a third of a metre wide. Yet remarkably, in 1521, a subsequent earthquake appeared to seal the crack entirely. Years later, however, it was discovered that the crack had not healed but had merely become less visible and so, in 1965, the pagoda underwent extensive repairs. Today you’ll find, when you enter the pagoda, that the second, fifth, seventh, ninth and eleventh storeys have been reinforced with steel girders, although these have been cleverly hidden, and facilities have been set up on the roof so that it now has a lightning rod and is better protected from rain.

So there’s more than meets the eye in this peaceful, tourist haven. The pagoda and temple are not only wonderful relics of history in of themselves; they also house several artefacts that have been dug up around the city. You’ll definitely want to stop off and visit the Ancient Bell, which is in the Bell Pavilion and has been preserved in its original condition since 1192. The bell weighs approximately 8,000 kilograms and has more than a thousand characters engraved on its surface. In 1993 it had to be repaired and welded, as it was damaged during the Cultural Revolution, but it has remained virtually unchanged since then. It was said that, back when the bell was first forged, its ring was so deafening that it echoed throughout the city. In 1998, in light of its popularity, another bell was forged that visitors are allowed to hit, in order to simulate the experience of hitting the original bell.

Nestled within Jianfu Temple, near the Small White Goose Pagoda, you’ll also find the 10 Ancient Pagoda Trees, which are all over 1,000 years old. They are surrounded by ancient stone carvings, which were once part of house gates, and ancient hitching posts for horses. These hitching posts are just upright pillars with various carvings on top, including carvings of mythological creatures, deities and auspicious symbols. In the temple, all of the hitching posts have been placed together to form what looks like a stunning stone forest. This is a fantastic place to take photographs as it is both beautiful and surreal.

On top of all of these wondrous historical artefacts, the Xi’an Museum boasts nearly 130,000 relics that all relate to the history of Ancient China and Xi’an specifically. Most of these relics have been unearthed from tombs in the surrounding area. There you’ll find stunning jade ornaments, Buddhist statues, stone carvings, porcelain figures, famous pieces of calligraphy, and paintings. There is also a small exhibition hall beside the museum that is dedicated to displaying paintings by Huxian County farmers. These paintings are particularly famous because they focus on portraying ordinary aspects of country life and are made using any artistic medium that was available to the farmer, including everyday objects such as newspapers.

If this isn’t enough to draw you in, the Small Wild Goose Pagoda regularly hosts a Chinese calligraphy class where visitors can learn the meanings behind various Chinese characters, and where you may even learn how to write a few characters yourself! What could be a better souvenir than a beautiful piece of calligraphy that was hand painted by you? In short, though the Small Wild Goose Pagoda Scenic Area may be one of the smaller attractions in Xi’an, this simply adds to its charm and makes it a wonderful distraction from the bustle of the city, a place where you can just unwind, relax and truly enjoy Chinese history.