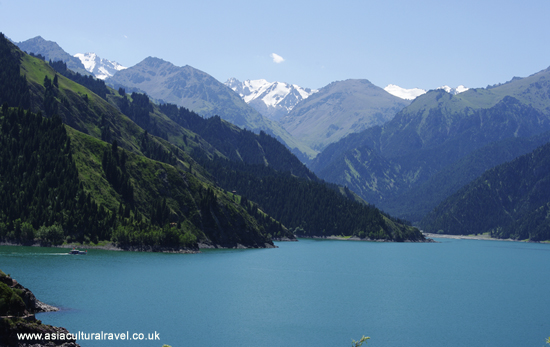 The name “Xinjiang” literally means “New Frontier” and may seem rather misleading, as this region has been formally part of China since 1884. Yet its official name, Xinjiang Uyghur Autonomous Region, is such a mouthful that it’s no wonder people chose to abbreviate it! Located at the northwesternmost point of the country, Xinjiang is the largest subdivision in China and, spanning over 1.6 million square kilometres (620,000 sq. mi), it accounts for a sixth of China’s total territory. It’s larger than France, Germany, and Spain combined but tragically only 4.3% of its land area is considered habitable for humans!

Geographically, the region is divided by the east-west chain of the Tian Shan Mountains, with the Dzungarian Basin in the north and the Tarim Basin in the south. Terrain in the former is dry steppe while the latter contains large portions of the Takla Makan desert surrounded by oases. Generally speaking, the Dzungarian Basin is cooler and receives more rainfall but still has a desert at its centre, known as the Gurbantünggüt Desert. So no matter where you are in Xinjiang, be prepared to get sand in your shoes! 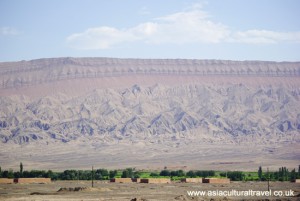 The Karakoram and Pamir Mountains rest to the southwest, while the Kunlun Mountains are to the south and the Altai Mountains are to the northeast. With snow-capped mountains, scorching deserts, and dry arid landscapes making up the majority of Xinjiang’s territory, it’s unsurprising that few people are sturdy enough to live there! The climate is marked by swelteringly hot summers and bitterly cold winters. In particular, Turpan Prefecture is often referred to as the “flaming continent” as its summer temperatures can exceed 40 °C (104 °F)! Further north, in the more mountainous areas, winter temperatures regularly plummet to below −20 °C (−4 °F).

Xinjiang is home to a number of ethnic minorities, including the Uyghur, Kazakh, Tajik, Hui, Kyrgyz, and Mongol people, most of which are religiously Muslim. Uyghurs represent about 44% of the overall population and approximately 90% of the population south of the Tian Shan Mountains, while Han people are in the majority towards the north and Kazakh people dominate the region’s northernmost point.

Yet the earliest evidence of life there came in the form of the Tarim mummies, which date back to 1800 BC and are of Caucasian descent. East Asian migrants arrived in the Tarim Basin approximately 3,000 years ago, while the Uyghur’s ancestors immigrated to the area in 842 AD. Over a period of 2,500 years, the region was subject to major political turmoil and has belonged to a succession of empires, including the Tocharians, Xiongnu, Han Dynasty, Tang Dynasty, Tibetan Empire, Uyghur Khaganate, Mongol Empire, Yuan Dynasty, Chagatai Khanate, Dzungar Khanate, and Qing Dynasty, to name but a few!

The Dzungarian Basin was once known as Dzungaria and was inhabited by a nomadic Buddhist people called the Dzungar, while the Tarim Basin was home to an oasis-dwelling Turkic people who evolved into modern-day Uyghurs. However, this was all to change during the Qing Dynasty (1644-1912), when the Qianlong Emperor ordered the extermination of the Dzungar people. From 1755 to 1758, in what is commonly known as the Dzungar Genocide, the Qing army massacred the Dzungar people and replaced them with sponsored settlements of Han, Hui, Uyghur, and Manchu people.

Approximately 80% of the Dzungar’s 600,000-strong population was wiped out, partly by war but mostly by smallpox, and much of their culture was purposefully extirpated. In 1884 the Qing court established Xinjiang as a unified region, containing the territory surrounding both the Tarim and Dzungarian basins.

Nowadays it is still an area of political unrest as the relationship between local Uyghurs and the Chinese government has begun to worsen. This is mainly due to religious and cultural differences, as the Uyghurs are a Muslim Turkic people. That being said, these issues only flair up occasionally and the region is still considered safe for foreign tourists so long as they are careful and stay informed.

In terms of religion, the majority of the population follow the Sunni branch of Islam, although there is a large minority of Shia Muslims. The magnificent Afaq Khoja Mausoleum and Id Kah Mosque in Kashgar are considered the two most sacred Islamic locations in Xinjiang, while the Bezeklik Thousand Buddha Caves are a major Buddhist site.

Xinjiang’s greatest claim to fame is its significance to the ancient Silk Road as several of its cities, including Urumqi, Kashgar, and Turfan, were once key stops along this historical trade route between China and Central Asia. These routes were designed mostly to avoid the unforgiving Takla Makan Desert, which nowadays is another popular attraction. After all, if ancient people could successfully cross parts of this desert on horseback, we should definitely be able to do it in our Land Rovers!