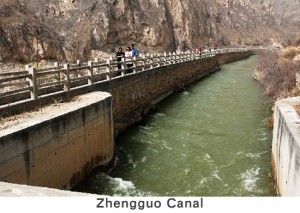 The Qin Dynasty was responsible for some of the greatest architectural achievements in ancient Chinese history, and this was predominantly due to the fact that they had access to a colossal slave labour force made up principally of peasants and farmers. The Lingqu Canal, the Dujiangyan Irrigation System, and the Zhengguo Canal are known as the “three great hydraulic engineering projects of the Qin Dynasty” and were each revolutionary for their time. These water systems are some of the largest of their kind and miraculously are all still in use today! Yet these watery wonders pale in comparison to the dynasty’s later achievements.

During the Warring States Period, large sections of defensive wall were used to surround the different states in order to protect them from each other and outside forces. When Qin Shi Huang conquered the other six states in 221 BC, he had the interior walls destroyed but connected large sections of the existing northern walls and eventually created the foundation for the Great Wall as we know it today. Although this wall has been renovated and rebuilt beyond all recognition, credit will always go to the Qin Dynasty for its original conception.

The Terracotta Army, on the other hand, has genuinely remained unchanged for thousands of years. This collection of over 6,000 life-sized terracotta warriors and horses was constructed simply to protect the Emperor in the afterlife. They are part of a gigantic tomb complex that was hermetically-sealed after the Emperor’s death in 210 BC and remained in perfect stasis until the army was rediscovered over 2,000 years later. After such a long nap, no wonder these soldiers look so fresh and well-rested!