As the renowned philosopher Lao Tzu once said, “The flame that burns twice as bright burns half as long”. And never was this statement truer than when it came to the Qin Dynasty (221-206 BC). Though it only lasted for fifteen years, this was the dynasty that unified China, established the Great Wall, and laid the basic foundation for all of the dynasties that followed. Many historians believe that the name “China” is derived from the word “Qin” (pronounced “Chin”), which speaks to its great importance. So why, after having accomplished so much, did the Qin Dynasty collapse so quickly?

In short, innovative though this kingdom may have been, these advancements came at great monetary and human cost. It is estimated that, during this brief fifteen year period, the country’s population dropped from a healthy 40 million to a staggeringly low 18 million. Books were burned, taxes crippled the citizens, scholars were buried alive, and thousands of slave labourers perished from exhaustion. From bloody beginnings to bloody ends, the Qin Dynasty has become synonymous not only with progression, but also with oppression and greed.

During the Warring States Period (c. 476-221 BC), China as we known it was separated into seven major warring kingdoms known as the Yan, Zhao, Qi, Chu, Han, Wei, and Qin. Each of these states vied for dominance, but for a long time they all appeared to be equally matched. Part of the reason for this was, believe it or not, because of their dedication to good manners! From the Spring and Autumn Period (c. 771-476 BC) onwards, the popular philosophy designated warfare as a gentleman’s activity, much like the concept of chivalry in Europe. It was considered improper to take advantage of an enemy’s weaknesses and there was a certain etiquette involved when it came to engaging in battle. Like a spot of English afternoon tea, it was of paramount importance to remain polite! Yet, during the 4th century BC, a Qin statesman named Lord Shang Yang emerged, and it was his philosophy of Legalism that would change the political and military landscape forever.

Shang Yang sought to do away with military formalities and with the feudal system altogether, instead advocating fixed laws where all citizens were treated equally and had to answer to the ruling court. Under his guidance, a number of governmental, political, and military reforms were instituted from 361 BC right through until his death in 338 BC. These reforms, coupled with strong leadership and little internal unrest, enabled the State of Qin to become far more ruthless and powerful than the other warring states. Its territory was also naturally shielded by high mountains, as it occupied a strategic position in the Wei River valley of modern-day Gansu and Shaanxi provinces.

From the 3rd to the 2nd century BC, the Qin rulers began centralising state power by creating a rigid system of laws and dividing their territory into a number of prefectures, each ruled by a government official appointed by the state. They commanded a large and efficient army, and took advantage of the latest developments in weaponry and transportation. One great example of this is that they abandoned the use of chariots and instead utilised a cavalry, which were much faster and able to adapt to different terrain types. In ideology and practice, the Qin Empire was militarily superior compared to their counterparts. 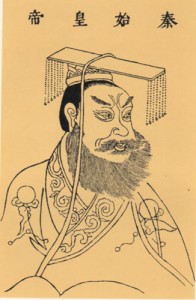 In 246 BC, at the tender age of just nine years old, Ying Zheng took the Qin throne and, together with his minister Li Si, utilised this advantage to embark on a series of conquests. In 230 BC, they annexed the State of Han; the State of Zhao surrendered in 228 BC; the northernmost State of Yan fell in 226 BC; and so on, until the last surviving State of Qi was finally conquered in 221 BC. Thereafter Ying Zheng bestowed upon himself the epithet Qin Shi Huangdi or the “First Sovereign Emperor of Qin”. Unlike previous rulers, who referred to themselves simply as kings or emperors, Ying Zheng equated his authority with that of the legendary rulers and deities known as the Three Sovereigns and Five Emperors, and thus derived his title from theirs. He may have been powerful, but he certainly wasn’t modest about it!

Not content with the huge empire he now had, Qin Shi Huang sent a colossal army of over 500,000 men to conquer the territory of the southern tribes. After a long and harrowing campaign, he successfully dominated much of modern-day Sichuan province, and the region surrounding the present-day cities of Guangzhou, Fuzhou, and Guilin. This set the boundaries of unified China, which would remain largely unchanged for the next 2,000 years.

In order to rule such a vast territory, the Qin court opted for a strict, totalitarian regime. They began by abolishing feudal privileges and standardising everything, from weights and measurements to currency and the writing system. After all, you can’t get jealous of someone when they have the exact same things as you! This was perhaps one of their most revolutionary and influential reforms, as Li Si’s creation of a uniform writing system helped greatly in uniting the country. Yet Qin Shi Huang wasn’t content with just controlling his citizens’ material lives; he also sought to dominate them mentally.

Before the Qin Dynasty, people subscribed to what were known as the Hundred Schools of Thought. These were based on the teachings of several renowned scholars and included philosophies such as Confucianism, Legalism, Mohism, and Taoism. It was this type of “divisive” thought that Qin Shi Huang wished to suppress, and so he set about repressing all non-Legalists philosophies and their followers. When it came to the Emperor’s wishes, individual human rights were essentially abolished and he was not afraid to use cruelty as a last resort. The most illustrative example of this was the infamous burning of the books and burying of the scholars incident.

In 213 BC, the Emperor ordered the burning of all books that advocated viewpoints other than the philosophy of Legalism, particularly if they challenged this school of thought or the state in general. Only texts with practical uses, such as ones on agriculture, divination, and medicine, were spared. This decree also stipulated that all scholars who refused to hand over their books would be executed by premature burial. According to historical documents, 460 Confucian scholars were buried alive and the school of Mohism was completely eradicated. Other important texts pertaining to the other schools of thought were also tragically lost.

Collapse of the Qin Empire

Undoubtedly extraordinary though these architectural achievements were, they proved to be the Qin Dynasty’s downfall. Huge tax levies needed to pay for their construction, the great human cost involved when building them, and the generally oppressive authoritarian regime inevitably took their toll on the people, and three separate assassinations attempts were made on Qin Shi Huang during his short reign. His increasing paranoia led him to become obsessed with making himself immortal and, in a horrible twist of fate, he died while traveling to the east in search of an elixir of immortality. Talk about irony!

The chief eunuch, Zhao Gao, and the prime minister, Li Si, hid the news of his death in order to secretly alter his will and change his successor to his son Huhai, who they felt would be more pliable and easily manipulated. He took the name Qin Er Shi and, although he lacked his father’s intelligence, he appeared to have the same vicious nature. It’s true what they say: the bad apple doesn’t fall far from the tree! He executed numerous ministers and princes, indulged in massive building projects that crippled the country, increased taxes, and even arrested messengers who brought him bad news. Evidently the phrase “don’t shoot the messenger” hadn’t been invented yet!

As a result of his despotic rule, coupled with the years of oppression they had suffered under his father, men from all over China soon started to revolt. In the ensuing panic, Li Si was executed and Zhao Gao forced Qin Er Shi to commit suicide. Ziying, Qin Er Shi’s nephew, ascended the throne and promptly executed Zhao Gao. In short, there were more deaths and executions than the end of a Shakespearean tragedy! Yet it appeared the damage was done and the dynasty was beyond redemption. Ziying’s attempts to declare himself as the one true king failed, and a full-scale rebellion broke out in 209 BC. 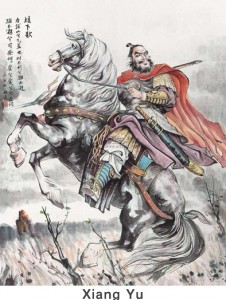 When rebels from the conquered State of Chu attacked, led by a Han lieutenant named Liu Bang, the Qin court was powerless to resist and surrendered in 207 BC. Ziying was executed by the Chu leader Xiang Yu but, in a shocking twist, he was in turn betrayed and defeated by Liu Bang. On February 28th 202 BC, Liu Bang declared himself Emperor Gaozu of the new Han Dynasty (206 BC–220 AD). As you can imagine, the citizens of ancient China were left hoping that bloody beginnings wouldn’t once again beget bloody ends.

One Reply to “The Qin Dynasty”