When the Qin Dynasty (221-206 BC) collapsed in 206 BC, two contestants for the throne emerged: the rebel leaders Xiang Yu of Chu and Liu Bang of Han. The country had fissured into 18 separate kingdoms, and each one claimed allegiance either to Xiang or Liu. It was a time of epic battles, political power plays, and fragile alliances. Although Xiang Yu put in a commendable fight, Liu Bang defeated him at the Battle of Gaixia (202 BC) and assumed the throne not long thereafter. Thus he established the Han Dynasty, moved his capital to Chang’an (modern-day Xi’an), and took on the regal name of Emperor Gaozu. Anxious to avoid the same mistakes that the despotic Qin Shi Huang had made, he embarked on a political campaign defined by liberal and beneficent administration. Little did he know that he had just established the longest serving dynasty in Chinese history, one so illustrious that China’s largest ethnic group refers to themselves as the “Han people” to this day. 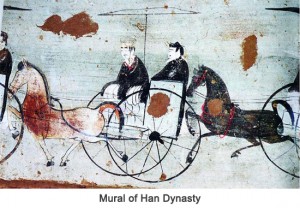 Only one major disruption would disturb this hugely successful empire: a temporary usurpation by an official named Wang Mang, who established the short-lived Xin Dynasty (9-25 AD). After all, nobody’s perfect, and the same goes for dynasties! In fact, the Han Dynasty was so long that historians use this interruption as a benchmark, dividing the dynasty into two periods: the Western Han Dynasty (206 BC-25 AD), when the western city of Chang’an was the capital and Wang Mang had yet to usurp the throne; and the Eastern Han Dynasty (25-220 AD), when Wang Mang was deposed and the capital was moved east to Luoyang. In total, a staggering twenty-four members of the Liu family would serve as emperor under a dynasty that lasted for over 400 years. So, no matter how big your family’s trophy cabinet is, it’ll never quite match the Liu’s!

Unfortunately the Han Dynasty’s success would be somewhat marred by political squabbles and corruption within the palace. While the emperor’s favourite consort would be granted the title of empress and her son would likely be selected as heir, numerous concubines complicated this process by each vying for power. The empress could be deposed at any moment and replaced by just about anyone, so competition was rife between the concubines and the statesmen who supported them. In short, life in the imperial palace was full of more scandal than your average soap opera!

One Reply to “The Han Dynasty”