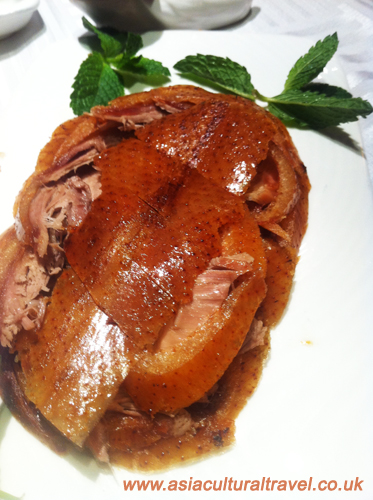 Beijing roast duck is undoubtedly the most famous dish in Beijing and also the most popular in local restaurants, for both tourists and locals. Believe it or not, it actually originated from Shandong Province. A restaurant named Bianyifang created its own technique of closed oven roasting in 1416, then, in 1864, another restaurant, named Quanjude, improved on this technique and created their own technique of hung oven roasting, which is now the most popular method for roasting duck in Beijing today. Jujube wood, peach wood and pear wood are generally chosen as the fuel for the oven because they give off plenty of heat with little smoke and impart a fruity fragrance. However, if you want to try duck that has been cooked using the closed oven roasting technique, you can still go to Bianyifang, which still maintains its original technique of cooking duck. 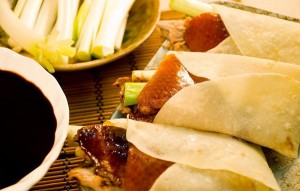 The best Beijing roast duck has crispy golden skin and meat that just melts in your mouth. To truly experience its mouth-watering flavour, first dip a slice of duck meat into some sweet bean sauce or hoisin sauce, then wrap the slice in a soft pancake along with some slices of vegetables, such as spring onion and cucumber.