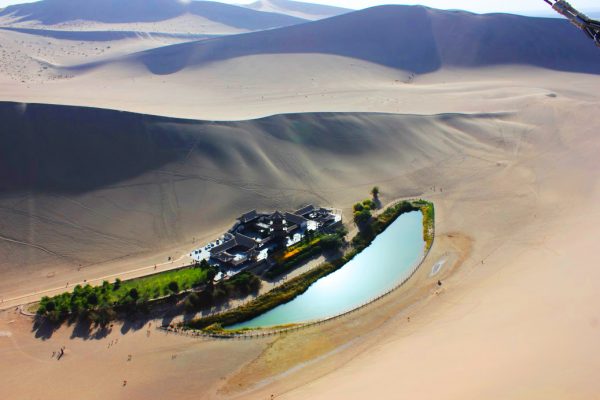 Nestled deep within the Gobi Desert, about 6 kilometres (4 mi) south of Dunhuang, lies an oasis blanketed with such lush grasses and brimming with such shimmering waters that one could easily mistake it for a mirage. It has supposedly existed for over 2,000 years and was given the name Yueyaquan or “Crescent Lake” during the Qing Dynasty (1644-1912) thanks to its characteristic crescent-moon shape. In its heyday, it played a focal role as one of the major rest stops along the ancient Silk Road. One can only begin to imagine the number of faces, wares, and stories this lake has born witness to in its lifetime. 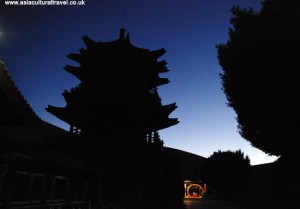 Its auspicious location and low altitude means that sand from the dunes, which surround it on all sides, are carried over the lake by cross-winds rather than falling into it. This has saved the lake from becoming smothered and allowed it to survive for so many years. According to legend, the trees around the lake have never wilted or died, although perhaps that’s just a tall tale! It is currently 218 metres (715 ft.) long from east to west and 54 metres (177 ft.) wide from north to south, although it tragically shrank in the 1990s and had to be partially refilled by the local government in 2006. Nowadays, as in ancient times, visitors flock to the area to marvel at the surrounding sand dunes, visit the lake’s pagoda, go dune-surfing, and enjoy a spot of camel riding. Just don’t push the camels too hard, or they might give you the hump!

Crescent Lake is one of the many wonderful stops on our travel: Explore the Silk Road in China