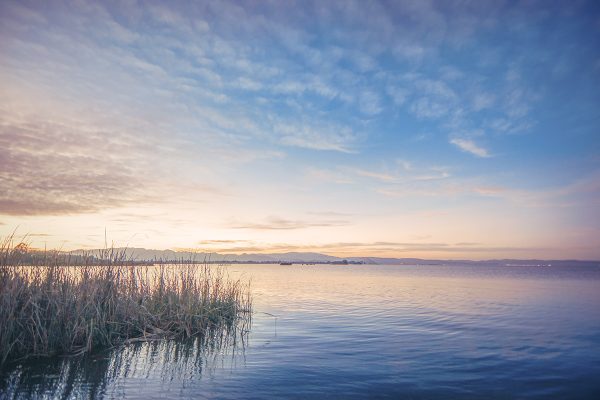 With a nickname like the “Sparkling Pearl Embedded in the Highland”, you know that Dianchi Lake has a serious reputation to live up to. It is a freshwater fault lake nestled at the foot of the mountains just south of Kunming and stands at an impressive 1,886 metres (6,189 ft.) above sea level. It covers a total area of just under 300 square kilometres (115 sq. mi), making it nearly as large as the entire country of Malta and ranking it as the eighth largest lake in China. It stretches 39 kilometres (24 mi) from north to south and 13 kilometres (8 mi) from east to west, with an average depth of 4.4 metres (14 ft.). So, unless you’re a professional basketball player or an Olympic swimmer, we strongly recommend you stick to a boat when navigating this watery behemoth!

Its natural banks have been formed by mountains and four hills rise in each direction, giving the lake a truly picturesque appearance. There’s the Jinma or Golden Horse Hill in the east, the Biji or Jade Rooster Hill in the west, the Baihe or White Crane Hill in the south, and the Sheshan or Snake Hill in the north. The mystical names and ethereal quality of these hills give the lake the appearance of an otherworldly paradise, particularly when you catch sight of the stunning scenery reflected in its waters.

Unfortunately, pollution has rendered the lake water undrinkable and it is currently ranked at Grade V, the lowest water purification level, meaning it is unfit for agricultural or industrial use. Though this pollution has caused the lake’s fish population to wane, fishermen still ply their trade on these crystal clear waters in much the same way as their ancestors did over one hundred years ago and it is still possible to swim in designated parts of the lake.

The history of the lake is delicately intertwined with the history of Yunnan itself. Throughout the Yuan (1271-1368) and early Ming (1368-1644) dynasties, the alluvial plain at the north of the lake was extensively irrigated to provide farmland for locals. However, evidence suggests that the lake may have been settled by farmers as early as the 2nd century BC! It was once the capital of the Dian Kingdom (500-109 BC), an independent state that eventually became part of the Han Dynasty (206 BC–220 AD), and was also subsequently the centre of the Nanzhao (738-902) and Dali (937-1253) Kingdoms. With such a regal background, it’s no wonder people regard Dianchi as a pearl in the Yunnan countryside.

Along the lake, you’ll find a number of attractions that are sure to delight you. Daguan Park is bursting with beautiful rock gardens, elegant pavilions and sturdy bridges, with the Daguan Pavilion at its centre. The pavilion was built in 1828 and has one of the most famous Qing Dynasty (1644-1912) couplets engraved upon it. This couplet is 180 characters long and is thus one of the longest couplets in Chinese history, brimming with poetic grace and imbued with historical significance.

The White Fish Park on the west bank of the lake is so named for a small hill, which looks like a white fish opening its mouth. This park is characterised by its verdant gardens and is particularly beautiful during spring, when the cherry blossoms are in full bloom and the crisp white sails of fishing boats can be seen far off in the distance.

At Haigeng Bank, Dianchi’s south bank, visitors can walk among the slender willow trees gently billowing in the breeze and take advantage of the natural swimming pool that is set up there during summer. Nearby you’ll find the Yunnan Folk Customs Village, where tourists can learn more about the resident Bai, Yi, and Dai ethnic minorities. With all of these wonderful attractions on offer, Dianchi Lake isn’t just any lake; it’s practically a theme park!