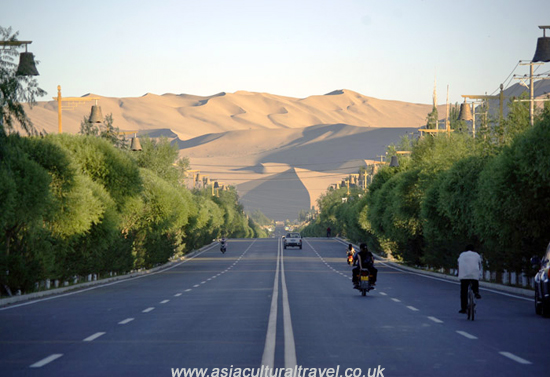 Situated at the point where the historic northern and southern branches of the Silk Road once met, Dunhuang is a city rich in cultural and historical significance. Flanked by the Gobi Desert to its east and the Mingsha or “Gurgling Sand” Dunes to its south, the city was a vital resting place for any pilgrims, traders, or travellers longing to escape the seemingly endless sandy plains. The “gurgling” sand dunes were so-named for the ghostly sound of the wind whipping over them, which perturbed Silk Road traders so much that they believed the desert to be haunted. No wonder they were eager to reach the next trading town! With the legendary Mogao Caves and shimmering Crescent Lake resting on its outskirts, Dunhuang has swiftly become a mecca for those intrigued by the history of the Silk Road.

It was originally established as a garrison town during the Han Dynasty (206 BC– 220 AD) and was designed to protect the Silk Road from northern invaders. Along with Jiuquan, Zhangye, and Wuwei, it was one of the four main garrison towns established by Emperor Wu in an effort to keep control of the Hexi Corridor. The power and wealth generated by the Silk Road made it an invaluable asset to the Han court, and they were so intent on guarding it that they built long sections of wall along the northern frontier. These include the historic Yumen Pass and Yang Pass, two of the last remaining earthen portions of the Great Wall. Yet it seemed these efforts were largely in vain, as frequent conflicts meant that Dunhuang would regularly be cut off from the imperial court for long periods at a time. In its long history, the city would be controlled by the Mongolian Xiongnu people, the Turkic Tuoba, the Tibetans, the Uyghurs, and the Tanguts. In short, it changed hands more times than an unwanted Christmas jumper!

When the Han Dynasty eventually collapsed, the city became semi-independent and was allowed to flourish as a cosmopolitan metropolis, making it a veritable haven for monks, traders, and travellers from all countries and religions. Thanks to the Silk Road, Buddhism reached Dunhuang relatively early in its history and it became one of the world’s great Buddhist centres in 366 AD, nearly 80 years before the imperial court would finally recognise it as a religion. In other words, people in Dunhuang followed Buddhism before it was cool! 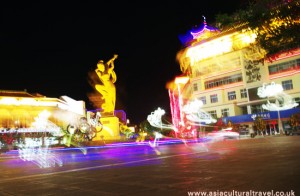 During this time, a Buddhist monk named Le Zun had a vision of one thousand Buddhas bathed in golden light and saw it as a divine sign that he must devote his life to carving one thousand Buddhist grottoes. Word of this spread fast along the Silk Road, and soon droves of monks arrived to help Le Zun pursue his noble dream. This sequence of artistic grottoes, which were begun in 366 and tragically abandoned during the Yuan Dynasty (1271-1368), is now known as the Mogao Caves. Not only does it represent a treasure trove of spectacular Buddhist art, its contents also serve as proof that Dunhuang and other surrounding oasis towns once played host to a myriad of ethnicities and religions.

The library cave, a hidden compartment of the cave complex that was re-discovered in 1900, contained over 45,000 manuscripts in numerous languages, including Tibetan, Uyghur, Sanskrit, and even Hebrew. Many of them were Buddhist in content, but some of them pertained to Zoroastrianism, Manichaeism, Christianity, Taoism, and Judaism. Still more fascinating is that some of them weren’t even religious, but instead had belonged to merchant caravans and contained detailed descriptions of their wares. These documents indicated that silk from Persia, lapis lazuli from Afghanistan, agate from India, and amber from as far away as northeast Europe had once passed through the city.

It was during the Sui (581-618) and Tang (618-907) dynasties that Dunhuang reach its peak as a major trading hub and, by the 10th century, Buddhism had become such an integral part of its culture that there were over 15 Buddhist monasteries in the city alone. However, it fell outside Chinese borders once again during the Song Dynasty (960-1279) when it was conquered by the Tanguts of the Western Xia Dynasty (1038–1227) in 1036. It wasn’t reincorporated into China proper until the Yuan Dynasty and tragically went into a period of decline during the Ming Dynasty (1368-1644), when maritime trade largely overtook the Silk Road. Thus the glory days of Dunhuang were behind it and this once glorious ancient city fell into such ruin that it eventually had to be rebuilt in 1760.

Nowadays the city has become a popular tourist destination for those seeking to retrace the steps of traders following the Silk Road. And, if you really want to get to grips with the city’s mercantile roots (or should we say routes), then you’ll need to indulge in an evening spent at the Dunhuang Night Market. This lively bazaar is held in the city centre every night and hosts a plethora of fascinating products, including carved Tibetan yak horns, jade sculptures, hand-painted scrolls, ancient coins, and enough souvenirs to guarantee you’ll be checking in a second bag on your flight home! 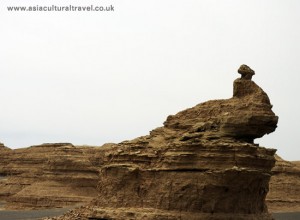 That being said, if you fancy something a little more unusual, you’ll want to check out the Dunhuang Yardang National Geopark or, as the locals call it, the Town of Demons! This geopark rests just 185 kilometres (115 mi) outside of the city and is resplendent with bizarre geological formations known as yardangs, which are the result of extreme weathering over a period of approximately 700,000 years. One branch of the Silk Road actually passed through this strange landscape and the monstrously shaped rocks were notoriously difficult to navigate, meaning trading caravans would often get lost there for days. This, coupled with the eerie sound of the wind whipping through the narrow passes, is what earned the place its supernatural nickname!

Make your dream trip to Dunhuang come true on our travel: Explore the Silk Road in China