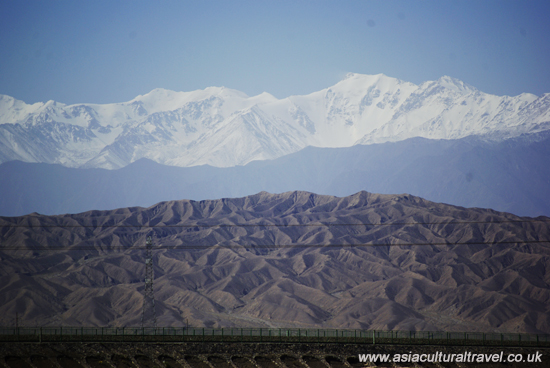 With the Yellow River winding its way to the south and the Qinghai-Tibetan, Mongolian, and Loess plateaus dominating the north, the geography of Gansu province is one of the most complex in China and has resulted in an unpredictable climate. Generally speaking, the south is subtropical while the north is arid and temperate. Sharp temperature fluctuations between summer and winter can range from −7 °C (19 °F) in January to 27 °C (81 °F) in July. Yet the surrounding mountains, broad plateaus, winding rivers, and sudden temperature changes only add to the province’s charm. After all, who doesn’t love a snow day or a sunny afternoon; even if they are in the same week!

A huge Neolithic site called Dadiwan was recently excavated in the eastern part of the province and indicates that the area has been inhabited since approximately 6000 BC. However, the most historically prestigious part of the province, known as the Hexi Corridor, rests just 190 kilometres (120 mi) northwest of the provincial capital of Lanzhou. As early as the Qin Dynasty (221-206 BC), the Chinese imperials used this passageway to connect China with the far west.

By the Han Dynasty (206 BC–220 AD), this flat stretch of land was one of the main routes along the Silk Road and became a centre for cultural exchange between China and Central Asia. Caravans richly laden with teas, silks, porcelain, and all manner of luxury items crossed this vast plain heading to markets as far away as Rome! The city of Dunhuang was perhaps the most significant stop on this road, as it was the last oasis city where travellers could rest before embarking on the dangerous journey around the Taklamakan Desert. They wouldn’t stop again until finally reaching Kashgar in Xinjiang, so praying for a safe journey was particularly important to them.

This perhaps explains why so many temples and grottoes can be found in and around Dunhuang. It seems the local merchants thought the more temples there were, the safer they would be! These religious sites contain stunning murals that have taught historians much about the lifestyle and culture of the ancient people that once lived there. The province was finally given the name “Gansu” during the Yuan Dynasty (1271-1368), as it was comprised of two pre-existing districts known as Ganzhou and Suzhou.

Nowadays the Han Chinese represent the ethnic majority, although there are large constituencies of Hui, Mongol, Salar, Uyghur, and Tibetan people. The southwest corner in particular is largely dominated by Tibetan settlements. That being said, the resident Mongol and Tibetan populations have largely abandoned their nomadic way of life in favour of sedentary villages. When it gets as cold as −7 °C (19 °F) in the winter, you can certainly see the appeal of a solid, warm house over a tent!

In terms of religion, the Hui, Salar, and Uyghur people follow Islam, while the Tibetan and Mongol ethnic groups tend to adhere to Tibetan Buddhism. This means that mosques, lamaseries, and temples can be found littered throughout the province. So it doesn’t matter if you’re Muslim, Buddhist, Taoist, or just plain curious; Gansu has somewhere for you!

The province has enjoyed great fame in recent years for its spectacular tourist attractions, which combine historical insight with artistic beauty. Among these, the Mogao Caves just outside of Dunhuang are perhaps the most celebrated. They are a Buddhist temple complex that is home to some of the most spectacular religious paintings in the country, most of which date back to the Tang Dynasty (618-907). They were designated a UNESCO World Heritage Site as early as 1987 and house a vast library, within which many invaluable Buddhist texts have been found.

Bingling Temple is a similar such complex and is located in a canyon along the Yellow River. Phenomenally it dates all the way back to 420 AD and contains dozens of well-preserved carvings, sculptures, and frescoes, the most notable of which is a 27-metre-tall (88.5 ft.) statue of Buddha carved out of the rock.

The Labrang Monastery is one of the most prominent Buddhist monasteries to be found outside of Tibet and is located in the southern county of Xiahe. It was originally built in 1710 and houses over 60,000 religious and literary works. Another spectacular relic of China’s ancient past is the Jiayuguan Pass, which dates back to the early Ming Dynasty (1368-1644) and is one of the largest and most intact passes along the Great Wall. With all of these amazing historical sites to visit, you’ll welcome the opportunity to be stuck in the past!

Join a travel with us to explore more about Gansu Province: Explore the Silk Road in China