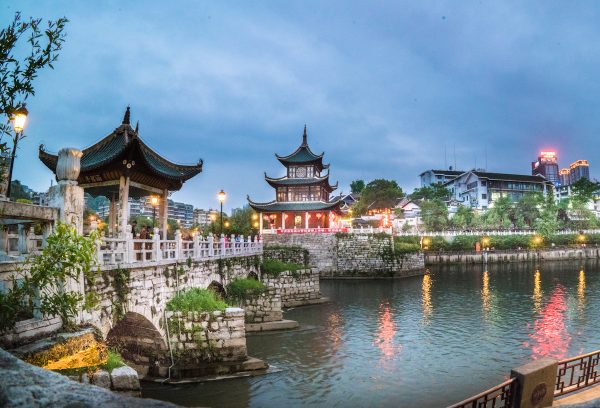 Ranking 2nd among the Top Ten Summer Capitals of China, Guiyang is rapidly becoming one of the country’s most popular summer resorts. Its relatively high altitude and southerly location mean it benefits from a warm but not overly humid climate, making its summers far more comfortable than cities like Beijing and Chengdu, where even the inhabitants find the weather simply too hot! Every year domestic tourists descend upon the city to escape the oppressive summer heat elsewhere and, although the city is rarely crowded, this tourist interest has allowed the city to develop and flourish. With a population of just over 4 million people, Guiyang is a small provincial capital with a big heart!

The city was officially established in 1283 AD, during the Yuan Dynasty (1271-1368), as the Mongolian rulers wanted to use it as a military base in the south. Their aim was so transparent that Guiyang’s original name was Shunyuan (顺元), which literally means “to obey the Yuan”. During the Ming Dynasty (1368-1644), it was named the capital city of Guizhou and has been so ever since. The city remained largely unchanged until the 1990s, when it experienced rapid growth as its tourism industry began to prosper. Yet its humble beginnings are evidenced by its layout, as the whole city still surrounds the “Big Cross” (大十字) or traffic intersection at its centre, which was named for its resemblance to the Chinese character for “ten” (十).

Since Guizhou is one of the most ethnically diverse provinces, it’s unsurprising that Guiyang is home to communities of 23 different ethnic minorities. After the ethnic Han majority, the Miao people boast the largest population in the city and their influence shows in the vast quantities of Miao silver jewellery, batik[1] cloth, and embroidery that can be purchased there as souvenirs. Other locally made goods, such as Yuping flutes[2], green tea, and the fiercely strong Maotai liquor, are available throughout Guiyang and provide a taste of the local culture. Just be careful not to develop too much of a taste for Maotai, or you may end up forgetting half your trip!

Bizarrely the city is currently the seat of a Roman Catholic Archdiocese and Catholicism has thrived there since 1696. This is evidenced by the stunning North Catholic Church (贵阳北天主教堂), which was built in 1875 and still holds Mass every Sunday. The church’s architecture is a magnificent combination of traditional Catholic influences with a Chinese flair. The round open windows are bedecked with carved wood instead of stained glass and the bell tower is styled like a large pagoda. Among the many unusual tourist attractions in Guiyang, the North Catholic Church definitely ranks as one of the highest.

However, if you fancy visiting a more traditional Chinese construction, the Jiaxiu Tower is a must-see attraction day or night. The tower rests at the centre of the Nanming River and has been a symbol of the city since 1598. By day this huge pavilion acts as a cultural museum, where visitors can marvel at the many artefacts on display. By night its many tiers are adorned with lanterns and the shimmering reflection of the tower floating on the surface of the water is a breath-taking sight.

The Qianling Park, with its curious community of wild monkeys, and the Hebin Park, with its restaurant inexplicably shaped like a UFO, are just a few of the other destinations that the city has to offer. From chanting priests to chirruping monkeys, Guiyang features a plethora of diverse attractions that are sure to entertain and delight!

[2] Yuping Flute: A type of end-blown vertical flute made from bamboo that originated from Yuping Dong Autonomous County in Guizhou. These flutes are particularly sought after for their beautiful carvings of dragons and other motifs. They are particularly popular with the Dong, Miao, and Tujia ethnic minorities and have been produced for over 400 years.

Discover more about Guiyang on our travel: Explore the culture of Ethnic minorities in Southeast Guizhou