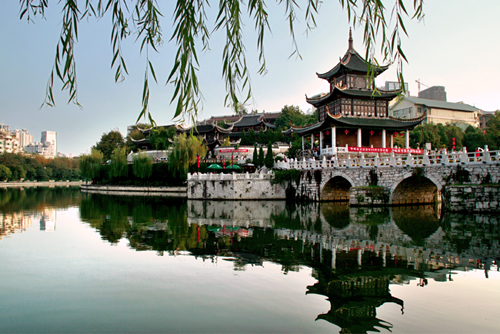 Jiaxiu Tower has long been the symbol of Guiyang, the provincial capital of Guizhou, and yet it appears to suffer from rather mixed luck. On the one hand, the tower was supposedly responsible for the success of three Guizhou scholars in the imperial examination. On the other hand, it’s been destroyed and rebuilt six times. It is sometimes referred to as First Scholar’s Tower because the term “jiaxiu” can be interpreted to mean “first scholar” or “to come first in the imperial examinations” and the tower was initially built to encourage local scholars to study hard and perform well. While it seems it managed to achieve its aim, evidently whatever good luck the building had went to the scholars and left it with none for itself!

The initial Jiaxiu Tower was masterminded by Jiang Dongzhi, the local governor, during the Ming Dynasty (1368-1644) and was completed in 1598. For over 400 years it has loomed over the city, witnessed its many trials and tribulations, and subsequently been destroyed by many of them. From almost complete incineration to damage during warfare, this poor tower has suffered in countless ways and yet still managed to rise back up. The final rebuild took place in 1909 and, although it may not be as ancient as many of the other Chinese attractions, it is nonetheless magnificent.

This three-tiered pavilion rests on Turtle Rock in the centre of Nanming River and is connected to both the northern and southern banks by Fuyu or “Floating Jade” Bridge. With its emerald green tiles, bright red pillars, upturned eaves, and white marble parapets, it looks like a small palace rising up out of the water. It is approximately 20 metres (66 ft.) in height and its upper levels provide a panoramic view of Guiyang that is truly breath-taking. In the bustling urban sprawl of this growing city, Jiaxiu Tower offers its visitors a moment of tranquillity and peace in this otherwise lively place. At night it is lit with lanterns and its reflection shimmers across the rippling waters of the river, providing passers-by with a night-scene that is unmatched throughout Guiyang

The tower also acts as a cultural museum, exhibiting authentic calligraphy and paintings from famous Chinese artists throughout the ages. The stunning woodcrafts, stone engravings, and calligraphy scrolls attract visitors and locals throughout the year and provide a welcome insight into Guiyang’s ancient past. The most famous relic of the collection is a couplet written by poet Liu Yushang during the Qing Dynasty (1644-1912). This couplet consists of 206 characters, making it technically 26 characters longer than the “longest couplet in China”, which is preserved in Daguan Tower in the city of Kunming, Yunnan. Liu’s choice of words in this famed couplet is supposedly so delicately poignant that it will strike at the heart of anyone who reads it, connecting us all in appreciation of the human condition. However, since the poem is written in ancient Chinese characters, nowadays it tends to leave visitors more bewildered than enlightened!

Surrounding the tower, the Cuiwei Garden boasts an ancient complex that perfectly combines the Ming and Qing styles of architecture and includes Gongman Pavilion, Cuiwei Pavilion and Longmen Academy. A new exhibition hall was recently constructed within the garden and contains examples of traditional clothing worn by Guizhou’s many resident ethnic minorities, from the glittering silver jewellery of the Miao people through to the intricate batik[1] cloths of the Dong women. All of these articles were made for or donated to the display, so there’s no need to worry; you won’t bump into any disgruntled, naked locals nearby!

Join our travel to visit the Jiaxiu Tower: Explore the culture of Ethnic minorities in Southeast Guizhou

One Reply to “Jiaxiu Tower”