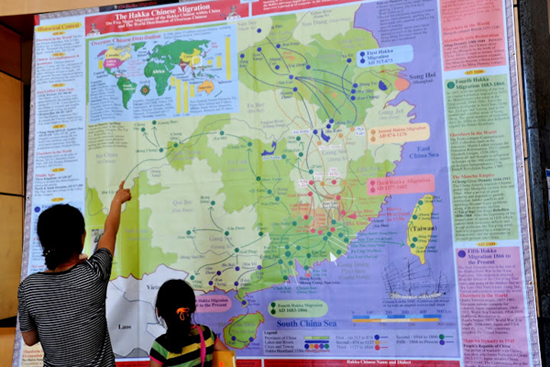 The Hakka people have unfortunately been subject to much calamity in their time, yet in spite of this adversity they appear to have triumphed. Most scholars agree that their ancestors originated from northern and central China. They came from an area somewhere near the Yellow River in what is now modern-day Shanxi, Henan, Anhui, and Hubei but were forced south in five successive waves of migration.

The first migration is believed to have taken place sometime around the Jin Dynasty (265-420), when social unrest and frequent invasions prompted the Hakka’s ancestors to move towards Jiangxi. The second migration took place during the Tang Dynasty (618-907) for similar reasons and the third happened as the Song Dynasty (960-1279) was overthrown by the Yuan Dynasty (1271-1368). The fourth was caused by the Manchu conquest of China, which resulted in the Qing Dynasty (1644-1912), and the final migration took place during the 19th century due to conflicts between the Hakka people and other ethnic groups. With all this moving around, it’s amazing the Hakka have managed to keep track of anything!

The term “Hakka” was coined during the reign of the Kangxi Emperor (1661-1722). At the start of his reign, he had many of China’s coastal regions evacuated by imperial edict as he believed that members of the Ming court who had fled to Taiwan may still pose a threat to the area. They were left this way for over a decade, until he issued another edict to re-populate these regions. The newcomers were given monetary incentives and were registered as “Kehu” (客户) or “Guest Households”.

The resident Cantonese-speaking inhabitants, who referred to themselves as “Bendi” (本地) or “Original Landholders”, were fiercely protective of their fertile lands and pushed the newcomers into the outer fringes, where they were forced to farm barren, mountainous regions. The term “Hakka” or “Guest Families” became a derisive term used by the Bendi for these newcomers, implying that they did not belong there. Over time the newcomers miraculously adopted the term “Hakka” for themselves and took great pride in their ability to migrate and adapt. After all, the best way to stop people insulting you is to make their insults into compliments!

Since the Hakka were often left with little fertile land to farm, many of their men turned to careers in public service or in the armed forces. Education became a focal part of their lifestyle, and this would lead them to great success later on. Considering their relatively small size, the Hakka have had a hugely disproportionate influence on the course of world history. They started the Taiping Rebellion, the largest uprising in modern Chinese history. Four of the six key Taiping leaders were of Hakka descent and together they eventually established the Taiping Heavenly Kingdom (1851-1864), which at one stage occupied one-third of China!

Many contemporaries of Sun Yat-sen[1] were Hakka people, including the businessmen Charlie Soong, who provided financial support during the Xinhai Revolution. The Communists’ famous Long March[2] consisted of over 86,000 soldiers, 11,000 administrative personnel, and thousands of civilian porters, of which over 70% were ethnically Hakka. And the founder of the Red Army, Marshal Zhu De, was also of Hakka descent. Talk about an illustrious heritage!

Other prominent leaders of Hakka descent include Deng Xiaoping, the Chinese revolutionary and statesmen; Lee Teng-hui, the President of Taiwan from 1988 to 2000 and the first popularly elected President in Chinese history; Lee Kuan Yew, the founding father of modern Singapore and its first Prime Minister; Thaksin Shinawatra, the only Prime Minister in the history of Thailand to be re-elected; and Nat Wei, the youngest member and the first British-born Chinese person to be inducted into the United Kingdom’s House of Lords. On top of their political prowess, Hakka people are renowned for their astute business skills.

[1] Sun Yat-sen (1866-1925): A Chinese revolutionary who played an instrumental role in overthrowing the Qing Dynasty, abolishing imperial rule and founding the People’s Republic of China. He became the first president of China in 1912.

Get some more stories about Hakka people on our travel: Explore the distinctive Tulou(Earthen Structure)