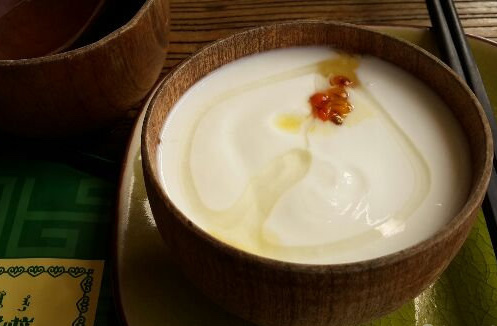 It should come as no surprise that, while it does feature Chinese and Russian influences, Inner Mongolian cuisine is profoundly similar to that of its neighbouring cousin: Mongolia. This cooking style has been shaped primarily by the resident Mongol ethnic minority, who have adapted their signature dishes not only to reflect their culinary preferences but also to accommodate their lifestyle. The Mongolian people and many of the other ethnic minorities who populate Inner Mongolia are predominantly nomadic and pastoral. Historically, their diet has adapted to help them survive during the bitterly cold winters.

The extreme climate meant that spices and vegetables were not readily available, so they rarely feature in signature Mongolian dishes. Thus they have had to rely upon what they call “red foods” (fatty meats), “white foods” (dairy products), and wheat-based foods. Staple ingredients such as mutton, beef, milk, cheese, butter, buckwheat, oatmeal, and millet could all be easily produced in the hostile steppes and provided hearty fare for the nomads throughout the year. Nowadays the influx of Han Chinese immigrants has meant that Inner Mongolian locals have increased access to fresh fruits and vegetables, but their traditional cuisine lives on in the form of their delicious snacks. 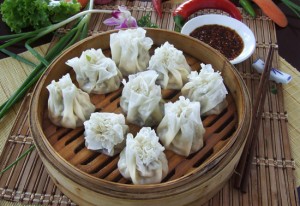 These delectable little dumplings may seem like an icon of Chinese cuisine, but they actually originated from Inner Mongolia’s capital of Hohhot! Shumai appeared in the region sometime between the Ming (1368-1644) and Qing (1644-1912) dynasties, and were usually served in teahouses as a side dish. It was thought that merchants traveling from Shanxi province introduced them to Beijing and Tianjin, which caused them to gradually become more widespread in China. They were originally called “shaomai” (捎卖), which literally means “sold on the side” and derives from the fact that they were often served as a tasty accompaniment to tea. While the pronunciation has been maintained, the Chinese characters for writing it have changed over the years.

Hohhot Shumai are usually served in small, specialty shaomai restaurants and are conventionally eaten at breakfast. The dumpling wrappers used are typically thin and, like other types of dumpling wrapper, are made simply from flour and water. These little parcels are then stuffed full of a delicious filling made from minced lamb, spring onions, and ginger. This gives them a dense flavour with a slightly spicy tang. The pastry is then loosely gathered around the filling to form the characteristic “flower” shape at the top of the dumpling. Depending on personal preference, Hohhot Shumai can either be steamed or pan-fried and are conventionally dished up in servings of eight. A small bowl of Shanxi black vinegar for dipping and a cup of tea are the perfect complement to these sumptuous little snacks. 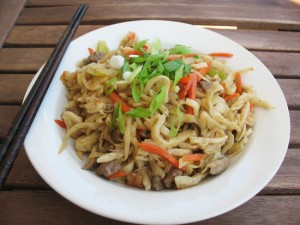 Tsuivan is a traditional Mongolian dish made from noodles, mutton, and a variety of hearty vegetables. The noodles are prepared by hand using dough made from wheat flour, buckwheat flour, or oat flavour depending on what is available. Unlike Chinese noodles, which are generally uniform in shape, this dough is roughly cut into thick strips. These noodles are then sautéed in a pan along with bite-sized pieces of mutton, potato, carrot, a sprinkling of salt, and some water. The result is a robust, stew-like dish that is sure to warm you up during those frosty Mongolian winters! 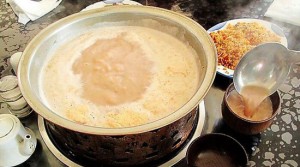 When guests are welcomed into a Mongolian herdsman’s yurt, they are usually offered a traditional beverage known as Suutei Tsai or Milk Tea. After all, who doesn’t love a good cuppa! The type of tea used is either black or green and is referred to as “block tea” or “brick tea” because it comes from a compressed block made from lower quality tea, such as tea stems or inferior tea leaves. This makes the tea easier to store and means it will last for longer. When needed, tea is chipped off of the block and added to boiling water. Once the water has changed colour, milk is added along with a teaspoon of salt. The milk is typically very fresh and is usually that of a cow, although milk from camels, horses, yaks, goats, and sheep may also be used depending on availability.

Some recipes also include butter, fat, and even fried millet. Talk about overegging the pudding, or should we say over-seasoning the tea! Historians believe that the tradition of drinking milk tea arose from a belief within the Mongol ethnic group that water was sacred and therefore should not be drank straight. Nowadays it’s often drunk at meals as a palate cleanser, since food in Inner Mongolia is notoriously fatty. Although its distinctive saltiness may come as quite a shock to foreign tongues, it’s a must-try if you want a taste of authentic Mongolian culture. 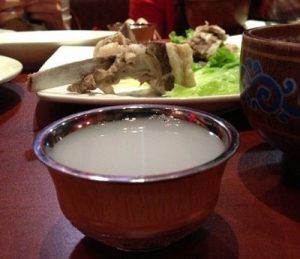 Following the dairy theme, airag is an alcoholic beverage made from the milk of a horse! Airag is actually its Mongolian name, and it’s more often referred to as kumis. It is particularly popular among several of China’s nomadic ethnic minorities, including the Kazakhs, Kyrgyz, and Mongols. That being said, milking a mare is no mean feat! Because of the difficulty involved in acquiring mare’s milk, it is a limited commodity, and so airag produced on an industrial-scale is normally made from cow’s milk.

Since cow’s milk has lower sugar levels than mare’s milk, when it ferments it has a much lower alcohol content. So if you’re looking to get a buzz on in Inner Mongolia, be sure to get the real deal. Although steer clear of unfermented mare’s milk, as it’s supposedly a potent laxative! Unlike beer or wine, where the alcohol content is derived from fermented grains and fruits respectively, the alcohol content in airag comes directly from the fermentation of natural sugars in the mare’s milk. Raw, unpasteurized mare’s milk is left to ferment over the course of hours or even days, while being stirred or churned on a regular basis.

Traditionally this would take place in a horse-hide container, which would either be placed on top of a yurt and turned over periodically, or attached to a saddle and shaken up during the course of a day’s riding. In some historical accounts, it was even said that this container would be hung at the door of the family’s yurt and that locals would punch the container as they walked passed, thus agitating the contents and helping the milk to ferment rather than coagulate and spoil. Who would have thought that you’d ever welcome a punch from your neighbour!

The finished product is typically served chilled and has a slightly sour flavour, with an alcohol content of between 0.7 and 2.5%. According to historical documents, it has been brewed in Central Asia since the 5th century BC and, during the 19th century, it even achieved a reputation as a cure-all. Historical figures like Leo Tolstoy and Anton Chekhov flocked to “Kumis Resorts” in an attempt to cure themselves of their various ailments. So if you catch a cold during your hike across the Inner Mongolian grasslands, be sure to have a swig of this unusual liquor!