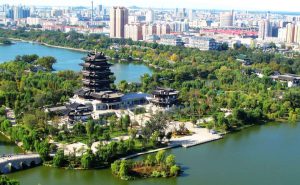 Resting at the northern foothills of the Mount Tai massif, Shandong province’s capital of Jinan is an urban centre embedded in nature. Even its nickname, the City of Springs, stems from the 72 artesian springs that add a touch of natural beauty to this bustling metropolis. Historically speaking, relics unearthed at the nearby Chengziya Archaeological Site have proven that the area was a centre for the Neolithic Longshan Culture and was settled over 4,000 years ago. Back when most of us were still bashing rocks together, the people of Chengziya were crafting unbelievably delicate black “egg-shell” pottery!

The Warring States Period (c. 476-221 BC) saw the rise of a bold, new philosopher in the city, known as Zou Yan. It was Zou who applied the pre-existing concepts of Yin-Yang and the Five Elements,  which have been integral features of Chinese philosophy ever since their conception, to real life in a scientific and organized manner. As the Han Dynasty (206 BC–220 AD) took over, Jinan became the capital of the Kingdom of Jibei and continued to evolve as a cultural and economic hub in eastern China. The last King of Jibei, Liu Kuan, was buried at nearby Shuangru Mountain and his tomb represented a veritable treasure trove for archaeologists. Having been virtually untouched by grave robbers, the tomb contained over 2,000 precious artefacts such as jade swords, jade masks, and jade pillows, many of which are currently on display in the city’s Shandong Provincial Museum.

By the 5th century, Buddhism had begun to flourish in Jinan, as is evidenced by the ancient Lingyan Temple and the spectacular carvings at Thousand-Buddha Mountain. Another important local celebrity emerged during the Song Dynasty (960-1279), a woman named Li Qingzhao. To this day, Li is widely regarded as the greatest female poet in Chinese history, and her work mainly reflects on the anguish she felt after she was forced to abandon her home when the Jurchen-led Jin Dynasty[1] (1115-1234) conquered Jinan.

However, it wasn’t until much later in its history that Jinan would be firmly regarded as one of China’s major cities. The name Jinan literally means “south of the Ji” and refers to the city’s position, which used to be south of the Ji River. As if by divine intervention, in 1852 the Yellow River shifted its course and overtook the bedding of the Ji River, effectively replacing it. Since the Yellow River was connected to the Grand Canal[2], this meant that Jinan was suddenly linked to the imperial capital of Beijing in the north and the agriculturally rich regions to the south. This catapulted Jinan from just another city to a major stop along one of the most lucrative trading routes in the country. 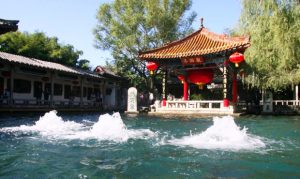 Nowadays, water still plays a crucial role in Jinan, as its 72 springs continue to provide a tranquil space where locals can indulge in a relaxing slice of nature. Baotou Spring, Black Tiger Spring, Five Dragon Pool, and Pearl Spring are regarded as the finest of the springs, and are popular tourist attractions in the city. In particular, Baotou Spring was described by the Qianlong Emperor of the Qing Dynasty (1644-1912) as “the number one spring under Heaven”.

Most of the city’s springs feed into the shimmering Daming Lake, the largest lake in Jinan and one of its major landmarks. The lake itself contains nine small islands and is surrounded by a scenic park, replete with historical buildings and verdant gardens. Of particular interest is the Moon-lit Pavilion, which is linked via bridge to a large hall. This hall was once connected to the outer city by a secret escape tunnel constructed by military governor Han Fuju. It provided the perfect retreat if the city was under siege, and also a fantastic shortcut to the lake!

Alongside these natural and historical delights, Jinan is also heralded as the gastronomic centre of Shandong province. The local cuisine, known as Lu or Shandong-style cuisine, is celebrated as one of the Eight Great Culinary Traditions of Chinese Cooking. The style in Jinan is considered to be emblematic of Lu cuisine, and has heavily influenced modern favourites like Beijing-style cuisine. It’s well-known for its use of flavourful broths, perfect for a wintry evening or a cool spring morning!

[2] The Grand Canal: It is the longest canal in the world and starts in Beijing, passing through the provinces of Hebei, Shandong, Jiangsu, and Zhejiang before eventually terminating in the city of Hangzhou. It links the Yellow River to the Yangtze River and the oldest parts of it date back to the 5th century BC, although most of its construction took place during the Sui Dynasty (581-618).