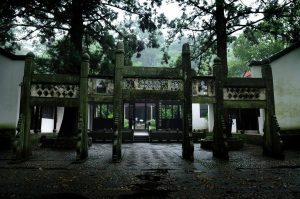 Resting at the base of Wulao or “Five Old Men” Peak on Mount Lu, the White Deer Grotto Academy acts as a testament to the importance of education throughout Chinese history. It is regarded as one of China’s Four Great Academies and, in many ways, it helped to shape the education system we see in the country today. Yet this illustrious seat of learning had humble beginnings. It was once simply a cave, where the Tang Dynasty (618-907) poet Li Bo and his brother secluded themselves as hermits and dedicated themselves to the pursuit of knowledge.

When Li Bo rose to prominence as the Governor of Jiangzhou (modern-day Jiujiang), he expanded the cave into a complex of study halls, libraries, and temples. Since Li Bo was famous for keeping a white deer as a pet, he was known as Master White Deer and the complex was named the White Deer Grotto. After Li’s death, it was tragically damaged during the collapse of the Tang Dynasty.

At the beginning of the Song Dynasty (960-1279), the complex was restored and transformed into a school known as the White Deer Grotto Academy. It was particularly favoured by Emperor Taizong, who donated innumerable books to its libraries and awarded an official rank to the academy’s headmaster. However, it seemed that history was tragically doomed to repeat itself, as warfare eventually led to the academy falling into disrepair yet again.

It wasn’t until 1179 that it was rebuilt and expanded by a revolutionary philosopher named Zhu Xi. Zhu is widely regarded as the founder of Neo-Confucianism, one of the most influential schools of thought in East Asia, and thus he played a pivotal role in Chinese history. At the time, he was serving as prefect of Nankang Prefecture (modern-day Nankang), and decided to redesign the academy based on the layout of the Temple of Confucius in Qufu, Shandong province. By 1180, the new academy opened its doors to its eager students, and Zhu personally taught several classes there. 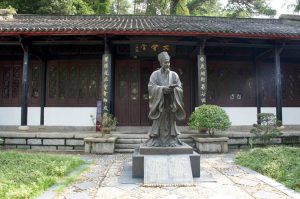 Its main function was to educate its students, collect and preserve books, act as a site for religious sacrifices, offer lectures from notable scholars, and expand on established philosophies. Throughout its venerable history, celebrated scholars such as Lu Jiuyuan, Lü Zuqian, and Wang Yangming would give lectures in its halls. Thanks to Zhu Xi’s admirable efforts, the prestige of the academy lasted for over eight centuries and it became the model for Neo-Confucian institutions throughout East Asia.

Nowadays the academy acts as one of the many spectacular scenic spots that can be found scattered throughout Mount Lu. Its main buildings include Lingxing Gate, Lisheng Gate, Lisheng Hall, Zhuzi Temple, the White Deer Grotto, and the Imperial Writing Pavilion. Zhuzi Temple was constructed in honour of Zhu Xi and contains over 120 stone tablets, some of which were engraved with inscriptions by the philosopher himself. At the back of the temple, there is a large cave with a stone statue of a white deer lying inside it, acting as a reminder of the complex’s original founder. After all, Zhu Xi’s story may be inspiring, but Li Bo’s relationship with his beloved pet is positively en-deering!