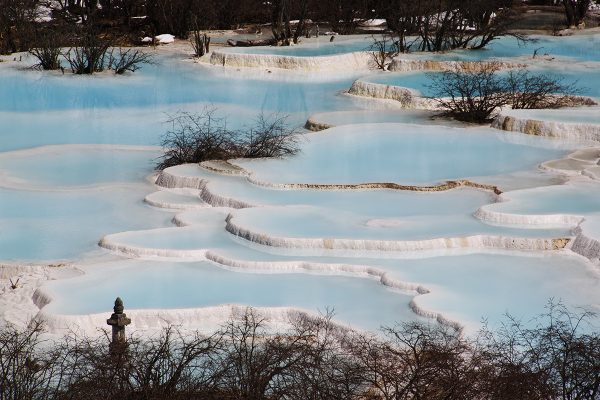 Jiuzhaigou, the Valley of the Nine Fortified Villages, is a place as ethereal as its name suggests. This national park stretches over 720 square kilometres (278 sq. mi) of raw nature nestled deep within northern Sichuan province. As part of the Min Mountains, this reserve is renowned for its snow-capped peaks, dense forests, thundering waterfalls, and richly coloured lakes. Its superlative scenic beauty and unparalleled biodiversity meant it was designated a UNESCO World Heritage Site in 1992 and a UNESCO World Biosphere Reserve in 1997. In short, this unearthly paradise earned more accolades in five years than most people get in their lifetime!

The park is located approximately 913 kilometres (567 mi) from the provincial capital of Chengdu, and is so-named for the nine villages that run along the length of its main valleys. Only seven of the nine remain populated today, and are known as Heye, Shuzheng, Zechawa, Rexi, Jianpan, Panya, and Yana. They are home to both the Tibetan and Qiang ethnic minorities, who have inhabited the region for centuries and consider many of the scenic spots in the park to be holy.

Within their rich tapestry of folklore, many fascinating legends surround the mountains, woods, and pools that can be found throughout the park. According to one such Tibetan legend, the warlord god Dage was madly in love with the goddess Wunosemo, and so presented her with a beautiful magic mirror as a gift. However, one day, a jealous devil caused the goddess to drop the mirror to earth, where it shattered to form the 114 shimmering lakes that are considered the highlight of Jiuzhaigou.

Scientifically speaking, much of the park’s gullies and mountains were formed thanks to tectonic activity between the Qinghai-Tibet Plate and the Yangtze Plate, since it lies along the plates’ major fault-lines. It is constituted of three main valleys, Shuzheng, Rize, and Zechawa, which are arranged in a formation that resembles the letter Y. Its expanse is populated by a number of endangered animal species, including the giant panda, the golden snub-nosed monkey, Thorold’s deer, and the Duke of Bedford’s vole. Although you’re unlikely to come face-to-face with a bashful panda, you’re sure to spot one of the park’s 140 native bird species, as the area is a haven for bird-watching.

Jiuzhaigou’s fowls may be fair, but they’re nothing compared to the park’s star attractions: the blue, green, and turquoise-coloured lakes that are dotted throughout its valleys. Many of them were originally formed by glacial activity, but then dammed by falling rocks. Some of them have a high concentration of calcium carbonate, which results in them being so crystal clear that their bottoms are visible even at high depths. Their rich colouring and unmatched transparency make them undoubtedly some of the most breath-taking bodies of water in the world.

It is recommended to visit the park during autumn, when the pools are at their most translucent and perfectly reflect the rich golden hues of the autumnal foliage. Rize Valley is said to contain the widest variety of sites, and so is typically visited first. The Primeval Forest, a stretch of ancient woodland that has been preserved for centuries, offers stunning views of the surrounding mountains, while you may recognise Arrow Bamboo Lake as the set of the martial arts epic Hero.

Pearl Shoal is the source of the magnificent Pearl Shoal Falls, which are said to look like a string of pearls cascading down the mountainside. Cyan-hued Panda Lake is reputedly the place where local pandas come to drink and empties out via the Panda Falls into Five Flower Lake, Rize Valley’s star attraction, which is so piercingly clear that you can still see the ancient trunks of fallen trees floating in its turquoise waters.

Second on the itinerary is usually Zechawa Valley, which is approximately the same length but rises to a higher altitude. It boasts the crescent-shaped Long Lake, the highest, largest, and deepest lake in Jiuzhaigou. According to local folklore, a monster supposedly haunts its depths, so be sure to keep an eye out when standing by its banks! The valley’s mythical status doesn’t end there, as its shimmering Five-Colour Pond was rumoured to be the place where the goddess Wunosemo would wash her hair. 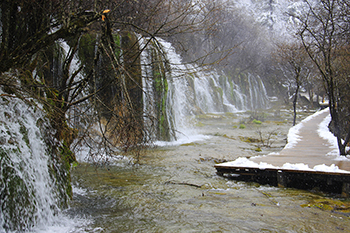 Not to be outdone, Shuzheng Valley possesses a number of legendary sites, although their origin stories are slightly less magical. For example, the largest lake in the valley, Rhinoceros Lake, was reputedly so-named because a Tibetan monk was once riding his rhinoceros through the valley when he became so entranced by the area’s beautiful scenery that he accidentally rode his rhinoceros directly into the lake! Perhaps he was distracted by the glorious Nuorilang Falls, the widest highland waterfall in China and one of the icons of Jiuzhaigou.

However, if you want to really connect with the spirituality of Jiuzhaigou, you’ll need to visit Zharu Valley, which branches off to the southeast of Shuzheng Valley. Its main hike follows the pilgrimage path of the local Tibetan Buddhists, who circumnavigate the sacred Zha Yi Zha Ga Mountain as part of a religious ritual. The hike offers stunning panoramic views of the natural scenery, a chance to learn more about Jiuzhaigou’s unique biodiversity, and an insight into its fascinating local culture.

One Reply to “Jiuzhaigou”