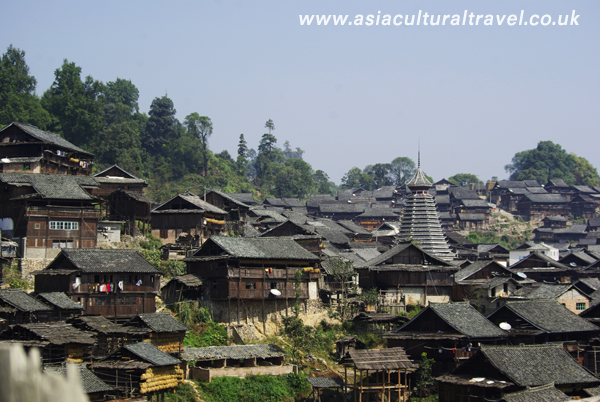 Kaili is often referred to as the “City of Festivals”, but don’t confuse it with Reading or Leeds; you won’t find any of the hottest musical acts here! Every year the villages surrounding the city play host to over 120 festivals, from the Miao people’s romantically charged Sister’s Meal Festival to the blazing Torch Festival of the Yi people. In fact, almost every day there’s a party somewhere in Kaili County!

The city itself is about 190 kilometres from Guizhou’s capital of Guiyang and has a population of only about 500,000 people. An approximate 75% of this population is made up of ethnic minorities, including the Bai, Dai, Dong, Miao, Yi, Zhuang, Naxi, and Hani people. So if you thought that London was culturally diverse, imagine a small city with 48 different ethnic groups!

Kaili is an industrial city and, as such, it represents a bizarre mixture of architecture, from characteristically Chinese homes built during the Ming (1368-1644) and Qing (1644-1912) dynasties to the now ubiquitous concrete high-rises. Yet the greatest throwback to ancient culture can be found on Kaili’s small market streets, where Sunday bazaars take place like clockwork every week. This bustling market sprawl offers anything and everything, from locally grown produce and handmade craftworks to discount washing machines and the odd basket of chickens!

Thanks to the plethora of local farming villages that surround Kaili, the cuisine there is incredibly fresh and has been heavily influenced by the resident ethnic minorities. Spicy and sour flavours are employed to give their specialities an added tang and signature dishes include the Miao hotpot known as Sour Soup Fish and a Dong delicacy known as Pickled Fish. From the glorious traditional costumes and tantalising treats to the vibrant festivals and hand-woven crafts, Kaili is a city defined by its ethnic minority population.

The Kaili Folk Museum is entirely dedicated to these ethnic minorities, with exhibitions displaying their costumes, handicrafts, paintings, and architecture, as well as information about their history, culture, customs, and festivals. Like a colourful patchwork quilt, this museum brings together all of the elements that help to make Kaili, and Guizhou, so special.

Kaili’s superlative feature lies in its status as a cultural hub. The city provides easy access to some of the most popular villages and attractions in Guizhou, such as Langdeshang Miao Village, Xijiang Miao Village, and Leigongshan Nature Reserve. If you want to learn more about China’s vibrant ethnic minority culture, or are simply curious about what a pickled fish might taste like, Kaili is the place to be!

Discover more about Kaili on our travel: Explore the culture of Ethnic minorities in Southeast Guizhou