Hoh Xil, also known as Kekexili, is an isolated region situated in the northwest part of the Qinghai-Tibet Plateau and its main claim to fame is that it’s the third least populated area in the world. So if you’re not a people person, Kekexili is the place to be! The region stretches across a colossal 83,000 square kilometres (32,000 sq. mi) and sits at an average elevation of 4,800 metres (15,700 ft.). That makes it larger than Scotland and nearly four times higher than Ben Nevis!

It rests between the Tanggula and Kunlun Mountains and borders the Tibet Autonomous Region in the southwest, and Qinghai and Xinjiang in the northwest. Divorced from mankind and surrounded by snow-capped mountains, the verdant grasslands and dense forests that populate this region have become a safe haven for a variety of animal species. This truly unspoiled wilderness is a wonder to behold and, in an effort to preserve it, 45,000 square kilometres (17,400 sq. mi) of it was carved out to form the Kekexili State Nature Reserve in 1995.

The nature reserve is located at the border between Zhiduo County and Qumalai County in Qinghai. Its rushing waters, shimmering lakes, and rolling meadows are home to 16 species of mammal, 30 species of bird, and 210 species of plant, of which 18 animal species and 84 plant species are endemic to the region. 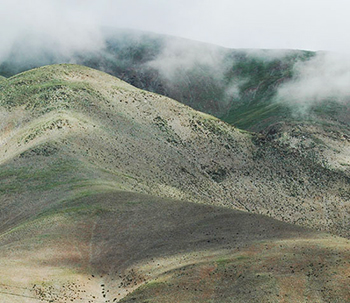 The preserve is home to many animals that are currently under national protection, such as snow leopards, Tibetan antelope, golden eagles, and brown bears. Thus the region is precious not only for its natural beauty, but for the many endangered species that inhabit its plains. Unlike other mountainous areas in China, the region is densely covered with lakes, such as Kekexili Lake, Sun Lake and Xuelian Lake, meaning that its animal residents are never too far away from a good drink and a good meal. Unfortunately, if you’re a cuddly little plateau pika[1], that means you’re on the brown bear’s menu!

The region has become so beloved that there was even a film made about it in 2004 called Kekexili: Mountain Patrol, which detailed the struggle of several noble locals trying to protect the rare Tibetan antelope from poachers. This helped highlight the current endangerment of several animal species in Kekexili and, in an effort to further raise awareness, the Tibetan antelope or chiru was made into one of the five mascots of the 2008 Summer Olympics in Beijing. The mascot’s name, Ying Ying (迎迎), literally means “Welcome! Welcome!” and, with the chiru’s adorably fluffy face, you couldn’t ask for a warmer one!