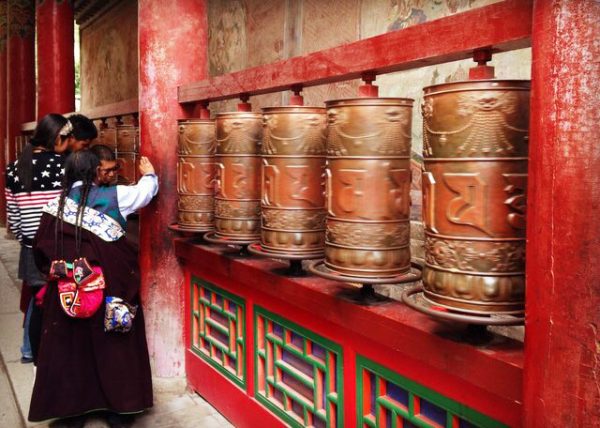 The Kumbum Monastery in Huangzhong County is considered the most prestigious “gompa” or Buddhist university monastery after the “great three” gompa of Tibet: Drepung Monastery, Ganden Monastery, and Sera Monastery. These four monasteries are basically The Beatles of the Buddhist world, with Kumbum being Ringo! It is located just 25 kilometres (16 mi) from the provincial capital of Xining and is dedicated to the Gelug branch of Tibetan Buddhism. The vast Qinghai Lake sprawls out nearby, reflecting the sapphire sky in its still waters, while all around birds can be heard softly chirping in the trees.

The founder of the Gelug sect, Tsongkhapa, was born in a nearby town known as Tsongkha in 1357. According to legend, several drops of blood from his umbilical cord soaked into the earth after he was born and a white sandalwood tree miraculously sprouted where the blood had fallen. The tree came to be known as the “Tree of Great Merit”, for its 100,000 leaves were adorned with images of Buddha and its bark bore mystic symbols. When it blossomed, it gave off an irresistible aroma that somehow settled the soul of anyone passing by.

In 1379, with the help of locals, Tsongkhapa’s mother erected a small temple and a stupa[1] on the site where her son was born. The temple was expanded in 1481 thanks to the support of wealthy nomads. Then, in 1560, a monk named Tsöndrü Gyeltsen arrived and decided to build a small monastery for meditation practice, which he called Gonpalung. Not long thereafter, in 1576, the famous Mongolian leader Altan Khan invited the future 3rd Dalai Lama, Sönam Gyatso, to Mongolia in an effort to help the dissemination of Buddhism.

On his way, Sönam spotted the holy tree that marked Tsongkhapa’s birthplace. He was so struck by the sacred tree that he commissioned Tsöndrü to build a larger monastery on the site and appointed him the head lama. The magnificent Kumbum Monastery was finally completed in 1583 and the Tree of Great Merit was surrounded by a protective fence. The name “kumbum” literally means “100,000 enlightening bodies of Buddha” and is derived from the 100,000 images of Buddha found on the leaves of the tree. By the 20th century, the monastery had been expanded to include thirty temples and fifty-two halls. 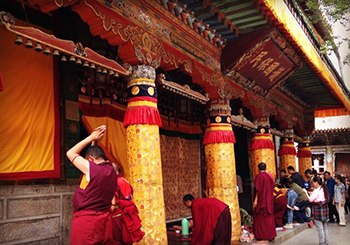 Nowadays, though the legendary tree unfortunately no longer stands, parts of it are now preserved in the stupa that rests in the Great Hall of the Golden Roof. Before the 1950s, the monastery supported a colossal 3,600 monks, although now there are only about 400. The majority are from the Tibetan ethnic minority, with the rest representing a mixture of Mongol, Yugur, and Han people. These monks are divided into four monastic colleges or “dratsang”: the Debate College, the Tantric College, the Medical College, and the Kalachakra[2] College.

Of these, the most popular is the Debate College. After all, who doesn’t love a good argument! During these heated debates, a student will stand in front of his seated teacher and think of a difficult question regarded the sutras[3]. Once he has thought of one, he will clap his hands loudly, extend his right arm to his teacher, and ask the question. Usually the teacher will only respond with cursory two or three words, but a longer response will elicit great joy from the student. Tourists are welcome to watch the debates and come face-to-face with this exciting practice.

The Great Hall of the Golden Roof sits at the centre of the complex and is its core building. It is so named for its remarkable three-tiered golden roof, adorned with patterns of lotus flowers and small statuettes of animals. From its colourful gates to the jade tiles and precious stones that are embedded in its walls, the hall is a luxurious feast for the eyes. Its main feature is an 11-metre-high (36 ft.) silver stupa that enshrines a gilded statue of Tsongkhapa. This stupa is surrounded by embroidered silk brocade, golden Buddha statuettes, burning butter lamps, and ornaments of all kinds.

Yet the monastery’s greatest claims to fame are its Three Treasures: Suyouhua or yak butter sculptures, embroidered silk brocade, and murals. Suyouhua are prepared at least three months in advance by resident monks for the grand butter sculpture show on the night of January 15th according to the Chinese lunar calendar. This art dates back over 1,300 years and involves a phenomenal degree of discipline. To prevent the butter from melting as they sculpt it, they must work in sub-zero temperatures and constantly dip their hands in freezing cold water. The elder monks must really have to butter them up so they don’t get cold feet!

[2] Kalachakra: The term literally means “Wheel of Time” or “Time Cycles” and can be applied to both the practice and the name of the Tantric deity attached to it. It revolves around the concept of time and cycles, from the cycles of planets to the cycles of breathing.

[3] Sutra: One of the sermons of the historical Buddha.