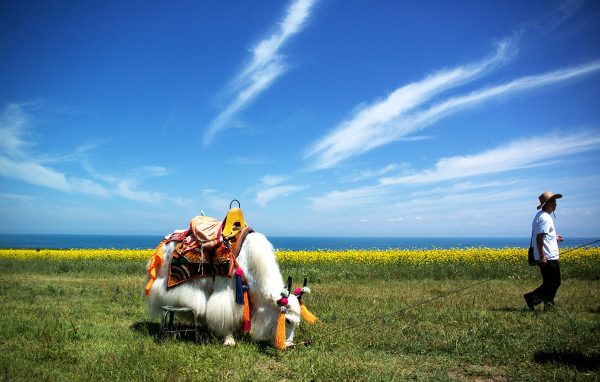 The name “Qinghai” literally means “Cyan Sea” and, as the largest lake in China and one of the largest saltwater lakes in the world, it commands so much prestige that the entire province of Qinghai is named after it! This colossal water-body has an average depth of between 19 to 21 metres (62-69 ft.) and covers a surface area of over 4,300 square kilometres (1,660 sq. mi). That’s over five times the size of New York City! According to local Tibetan Buddhists, who regularly circumambulate this watery behemoth as part of their pilgrimage, it can take upwards of 15 to 23 days to complete a full circuit of it on foot.

The lake is located about 100 kilometres (62 mi) west of Xining, the provincial capital of Qinghai, and has unsurprisingly become a popular tourist attraction in the region. Since it rests at an altitude of about 3,600 metres (11,800 ft.), it benefits from temperate, dry summers and is thus the perfect retreat for those wishing to escape the oppressive humidity in other parts of China. In spite of its salinity, the lake also supports several species of fish so you know that, if you enter any of the small restaurants on the lake’s shore, fresh fish is bound to be on the menu! 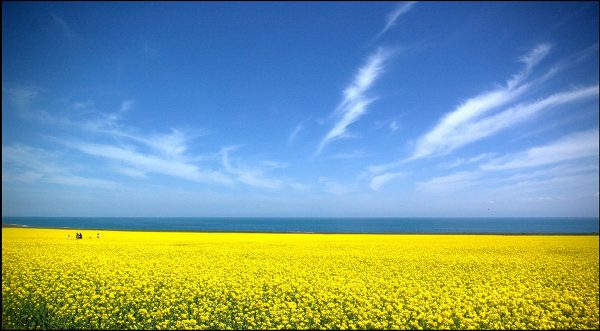 Yet the lake’s greatest attractions are the many islands dotted across its surface, the most famous of which is Bird Island. Every year throughout April and May, many species of birds use the lake as a resting stop whilst they migrate across Asia. In some cases, the birds settle here and even lay their eggs, which led to the establishment of the Qinghai Lake Natural Protection Zone in 1997. The vast majority of these birds gather on a couple of little islands in the northwest of the lake known collectively as Bird Island. During peak season, over ten thousand birds can be seen perched on these small rocks, laying their eggs or chirruping their sweet songs. Whether you’re a bird-watcher or not, the spectacle of seeing so many birds in one place is not to be missed!

Towards the west of the lake, an island known as Mount Haixin or “Heart of the Lake” is host to several stunning temples and was supposedly once home to a Buddhist monastery. According to legend, the monks who lived there did not own a boat and had no other means of traversing the water. They would wait till winter each year, when the lake would freeze over for three months, and then would cross the icy expanse on foot. It is also rumoured that Emperor Yang of the Sui Dynasty (581-618) commissioned his officials to raise horses on this isolated island.

Nowadays the lake is the site for the annual Qinghai Lake International Cycling Race. Fortunately it takes place in July, around about the same time as the Tour de France, so that’s already a lot of the competition out of the way! Approximately 250 cyclists from about 15 countries gather for this prestigious race, which covers a gruelling 1,300 kilometres (808 mi) at an altitude of 3,300 metres (10,800 ft.). Considering the distance from Beijing to Shanghai is only about 1,200 kilometres (746 mi), we won’t blame you if you decide to remain a spectator!