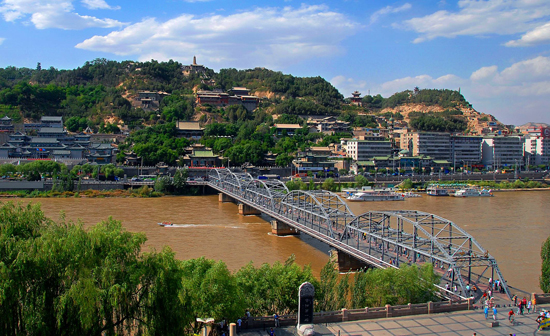 Flanked by the Qilian Mountains to the north and split by the Yellow River at its centre, Lanzhou is a city immersed in its natural surroundings. It is the provincial capital of Gansu province and historically was one of the major trading cities along the ancient Silk Road. With the Maijishan Grottoes to its east, Bingling Temple Grottoes to its west, Labrang Monastery to its south, and Mogao Caves to its north, Lanzhou delivers magnificent historical attractions at every point of the compass!

The city rests deep with the Hexi Corridor, which was a natural passageway that connected China with Central Asia and was thus an integral part of the Silk Road. This corridor was flanked by the misty Qilian Mountains and Tibetan Plateau in the south and the Beishan Mountains and inhospitable Gobi Desert in the north, meaning trading caravans really only had one choice when it came to traveling into China. This made control of the Hexi Corridor invaluable, as whoever controlled this territory would also have power over one of the most important trade routes in world history. This meant that, like a prime piece of real estate, oases towns along the Hexi Corridor were hotly contested!

The Lanzhou region originally belonged to the Western Qiang people, but became part of the State of Qin during the 6th century BC. Under the Han Dynasty (206 BC–220 AD), it became one of the major links along the Silk Road and was also an important crossing point on the Yellow River. It was considered so valuable that it eventually earned the nickname the Golden City! The stunning Yumen Pass and Yang Pass, two of the last surviving earthen portions of the Great Wall, were erected during this time as part of a huge section of wall stretching along the northern frontier. This was designed by the Han court to help defend the Silk Road from northern invaders such as the Xiongnu people, and achieved relative success until the collapse of the Han Dynasty. Thereafter the region was passed around between several tribal states faster than a hot potato!

During the 4th century, Lanzhou briefly became the capital of the Former Liang Dynasty (320–376), until it was conquered by the Northern Wei Dynasty (386–535). Under the guidance of the Northern Wei rulers, the city flourished as a centre for Buddhist study from the 5th right through until the 11th century. It was recaptured by Chinese forces during the Sui Dynasty (581-618), where it became the seat of Lanzhou prefecture, but during the Tang Dynasty (618-907) it was lost to the Tibetans in 763 and wasn’t recovered until 843. However this imperial control turned out to be just another brief flirtation, as it soon fell into the hands of the Tangut people, who established the Western Xia Dynasty (1038–1227).

Evidence of the city’s illustrious history as a centre for Buddhism can be found just 80 kilometres (50 mi) to its southwest in the form of the Bingling Temple Grottoes or Thousand Buddha Caves. This sequence of caves was begun sometime during the 4th century and construction continued for approximately 1,000 years, yielding over 200 caves, 690 stone statues, 82 clay sculptures, and some 900 square metres (9,700 sq. ft.) of stunning murals. It’s a veritable treasure trove of ancient Buddhist art but its isolated location means that, unlike the Mogao Caves and the Maijishan Grottoes, it receives very little tourist traffic and makes for a peaceful day out. You may even come back from your trip a little more enlightened! 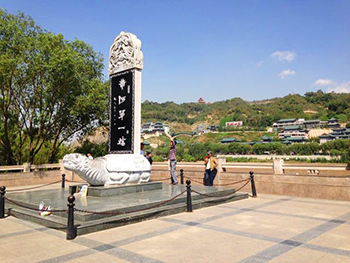 Other Buddhist relics to be found in the city include the temples at the Five Spring Mountain Park on the northern side of Gaolan Mountain. According to legend, a famous Han general named Huo Qubing once led his forces here, where they nearly collapsed from exhaustion and thirst. Without further ado, Huo whipped the ground five times with his trusty horsewhip and five springs appeared. These springs can still be seen today and are dotted about amongst the numerous architectural sites, including the Butterfly Pavilion, Dizang Temple, and Wenchang Palace.

And, if it’s historical architecture you’re after, then no trip to Lanzhou would be complete without a visit to Zhongshan Bridge. This was once the site of Zhen Yuan Floating Bridge, one of the many floating bridges that spanned the Yellow River. These bridges were formed by strapping over 20 ships together using ropes and chains. Now this may sound rather magical, but these bridges were notoriously unstable and were frequently destroyed by floods, resulting in the death of many people. That being said, like Rocky Balboa, it seems Zhen Yuan Bridge wasn’t going to retire without a fight! In spite of adversity, it managed to survive for a staggering 500 years before it was finally replaced in 1909 by the iron Zhongshan Bridge you see today.

Join a travel with us to explore more about Lanzhou: Explore “The Good Earth” in Northwest China