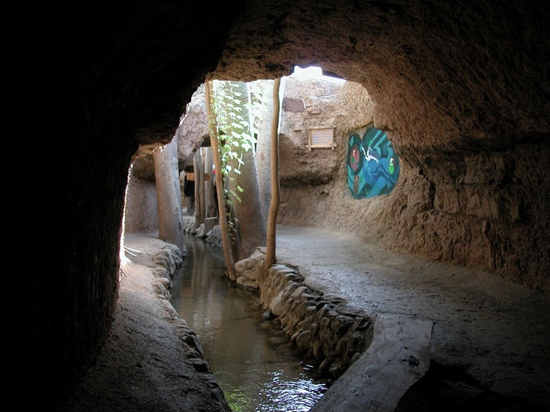 In the language of the Uyghur ethnic minority, the word “karez” means “well”, so it should come as no surprise that the karez water system is made up almost entirely of wells! It’s located in the Turpan Depression, the second lowest depression in the world, and is made up of a series of vertical wells that channel water from the base of the Tian Shan Mountains and the Flaming Mountains into a system of underground canals that eventually resurface in the city of Turpan and become part of its irrigation system. It depends upon melted snow that has trickled down from the ice-capped mountains and takes advantage of the downward slope created by the Turpan Depression, which exploits gravitational force to propel the water through the canals. This provides a stable water source regardless of season. We’re sure you’ll all agree that it’s a very well thought out system!

The canals are predominantly underground and the surface canals are heavily sheltered by trees on either side in an attempt to prevent evaporation in the unforgivingly hot climate of Turpan. At certain points, there are entry tunnels that provide locals with direct access to the underground canals in order to get water for themselves. The average karez is about 3 kilometres (1.9 mi) long, with the longest being about 30 kilometres (19 mi) and the shortest being just 30 metres (98 ft.). Perhaps the most ingenious feature of the karez is that it effectively prevents pollution and it requires no pumps or equipment to move the water.

Similar water systems known as qanats became popular in Persia and the Middle East around about 800 BC. It is not known exactly how the Turpan people came upon the technology and the know-how to build the karez water system, but the most likely explanation is that it originated from Persia via the Silk Road. Miraculously, this intricate water system was dug out by hand using simple tools, with only buckets and draft animals to help dredge up the dirt. The oldest karez date back to the Han Dynasty (206 BC– 220 AD), although most of them were masterminded during the Qing Dynasty (1644-1912). 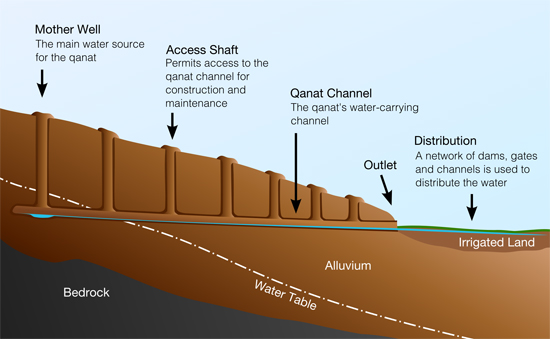 This system was crucial to Turpan’s success as an oasis town along the Silk Road, as it enabled the town to support large quantities of traders, caravans, and horses who needed to replenish their supplies as they skirted the hostile Taklamakan Desert to the southwest. Had it not been for the local people’s ingenuity, the town may have been abandoned and swept under the sands of time long ago. Not to mention, it is this water system that enables the city to produce some of the juiciest grapes and sweetest raisins in all of China! Nowadays the nearby Turpan Water Museum is entirely dedicated to demonstrating how the karez water system works and showing, through information and various artefacts, its historical importance to the region. 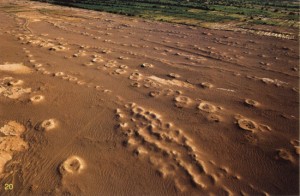 Over 1,100 wells still remain and the system boasts a total length of over 5,000 kilometres (3,100 mi), making it nearly twice as long as the Golden Gate Bridge! That being said, only about 300 wells are still active today. Occasionally you might catch locals relaxing in them, as they function as natural air conditioners and provide the perfect way to escape the scorching heat.

Join a travel with us to explore more about Turpin Karez Water System: Explore the Silk Road in China

One Reply to “The Turpan Karez Water System”