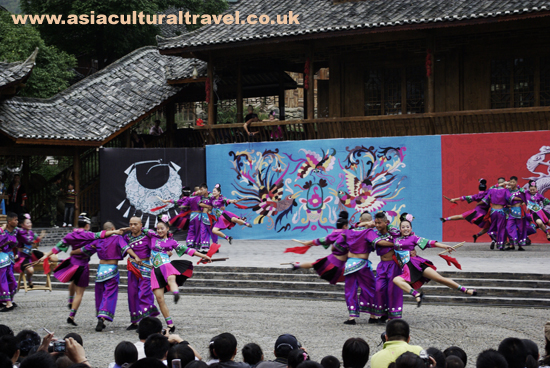 Performances in Miao villages will always be set to music and, when it comes to the Miao people, the lusheng[1] is the instrument of choice, although other instruments like the suona[2] and the copper drum are also popular. During many festivals, the lusheng dance will be the focal attraction. It is a traditional dance performed by the Miao people in southeast Guizhou. This style of dance can be divided into two types: lined dance and stepping dance. In the lined dance, the performers will hold their lusheng, stand in a line and dance while turning around, with the performer playing the largest lusheng as their axis. In the stepping dance, two performers will play lusheng of the same size and act as the leaders of the dance. The other performers will circle around them and follow their movements. 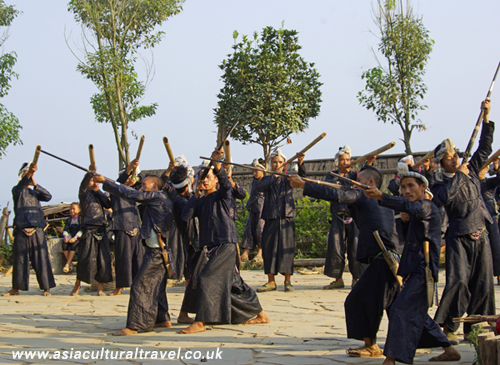 The stepping dance in Rongshui County, Guangxi, is considered particularly magnificent as dozens of lusheng are played and hundreds, sometimes even thousands, of people will join in the dance. It is a true spectacle of joy and a wonderful opportunity to hear the folk music played on the lusheng. In western Guizhou, Yunnan and Sichuan the Miao people have become particularly famous for their special, acrobatic lusheng dance. Normally it involves one, two, four or eight performers. For example, in Yuanyang, Yunnan, a performer will climb up a decorated wooden pole that is several metres high whilst still playing the lusheng. While continuing to play, they will pick an object off of the top of the pole and climb down. Finally, when they are one or two metres from the ground, they will somersault off of the pole while still playing their lusheng. Other acrobatic tricks include playing the lusheng upside down, playing it whilst performing rolls, and playing it whilst jumping over objects.

[2] Suona: A Chinese wind instrument. It is made up of a horn with a double reed that makes a distinctively loud and high-pitched sound. It comes in several sizes and the size of the horn affects the sound it makes. It is used throughout China in ritual music and folk music.

Join a travel with us to enjoy the live Performance from Miao People: Explore the Culture of Ethnic Minorities in Guizhou

One Reply to “The Performance of Miao Ethnic Minority”