The daily clothing worn by Miao people will differ from place to place and many of the Miao subgroups are designated by the colour of their clothes, such as the Hmub Miao of southeast Guizhou who are often referred to as the Black Miao because of their characteristically indigo coloured clothing. In northwest Guizhou and northeast Yunnan, the Miao men will typically wear linen jackets that are colourfully embroidered and woollen blankets draped over their shoulders that are decorated in geometric patterns. In other areas, the men will wear short jackets that are buttoned down the front or to the left, long trousers with wide belts and long black scarves. In west Hunan and northeast Guizhou, the women wear jackets buttoned on the right and trousers that have delicately embroidered collars, sleeves and trouser legs. In other areas, the women wear high-collared short jackets and pleated skirts of varying length. These pleated skirts can have hundreds or even thousands of vertical pleats.

The pleated skirts worn by many young Miao women are culturally significant and wonderful legends abound as to how they came to be. The legend called “the Origin of the Pleated Skirts” states that, in order to differentiate themselves from other ethnic minorities, a mother and daughter set about sewing a unique skirt for the Miao people. They thought long and hard about what the skirt should look like but to no avail. Later, as they were walking through the countryside, they came across a kind of local fungus. The shape of this fungus inspired them and they set about sewing a skirt that would imitate the pleats of the fungus. Once it was complete, they wore the skirt to the flower site to thread flowers onto it. Other Miao women saw the skirt and all immediately praised it. Eventually, these pleated skirts spread throughout the Miao villages and even women from different branches of the Miao people began to wear pleated skirts of different lengths.

These pleated skirts can be divided into three lengths: long, mid-length and short. Long skirts reach near the ankle, mid-length skirts are below the knee and short skirts are above the knee. The length of the skirt can be used to distinguish different subgroups of Miao. For example, in Leishan there are a group of Miao women referred to as “short skirt Miao” because their skirts are only about 20 centimetres long. The legend behind this short skirt goes that a long time ago, in ancient times, there was a very brave and handsome Miao hunter. One day he caught a beautiful golden pheasant and sent it to his beloved, a girl called Abang. To express her gratitude, Abang wove cloth by hand and then stitched and embroidered it to imitate the feathers of the golden pheasant. When the hunter returned, she wore the beautifully decorated short skirt and looked as magnificent as the golden pheasant. Thereafter, this style of richly coloured and delicately embroidered short skirt became popular in Leishan. 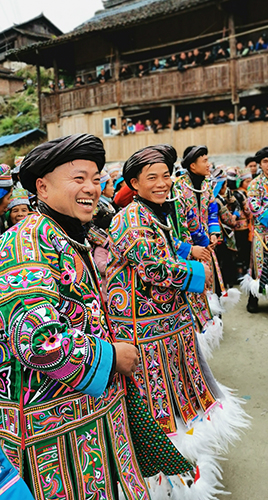 On top of their beautifully embroidered clothes, Miao women are also famed for the glittering silver adornments that they wear during festival time. The Miao people regard silver as a symbol of wealth and so have a particular fondness for it. They also believe silver symbolises light and good health, so wearing silver will ward off evil spirits, stave off natural disasters and bring good fortune. When it comes to the ornamental silver worn by the Miao women, the heavier the better, so some festival outfits can weigh upwards of 20 to 30 jin (about 10 to 15 kg).

A typical festival outfit worn by a Miao woman will include a hat or crown, horns, a comb, earrings or ear pendants, a neckband, a necklace, a collar, bracelets, and rings, all made of silver. Most of these will have been handmade by Miao silversmiths. The decorations are typically in four styles: symmetrical style, balanced style, connected style and radiating style. They usually feature patterns involving dragons, phoenixes, flowers and birds.

The most striking of these adornments is the silver hat or crown. Common motifs for the silver hats are a magpie stepping on plum, a golden pheasant calling out, a peacock spreading its tail, and a male and female phoenix perched together. These motifs can vary in appearance from region to region. For example, the phoenix hat of the Huangping region features hundreds of silver flowers, four birds and one phoenix. The silver pieces at the back of this hat are meant to imitate the phoenix’s tail feathers.

In some Miao villages, such as the ones near Kaili, Leishan, Danzhai and Taijiang, the silver horns are the most important adornment. They vary in thickness and are meant to look like the horns of a bull. The horns are each typically 50 to 70 centimetres long. They normally have patterns hammered into them, such as phoenixes or dragons holding pearls, and are sometimes decorated with feathers or tassels. The collar is another indispensable silver adornment for Miao women and is sometimes called a “moon plate” because it is shaped like a crescent moon. Miao women will also wear either 3 to 5 bracelets or 7 to 8 bracelets on each wrist. These bracelets come in several different styles and can even be made to look like dragons.

The Chinese often refer to Miao women as “fairies” because of the ethereal appearance that their festival clothes give them. They are considered so beautiful and majestic in their traditional dress that they appear almost otherworldly. If you plan on visiting any of the Miao villages, we strongly recommend that you aim to arrive during festival time and catch these fairies flitting about the villages, singing and dancing in their glittering splendour.