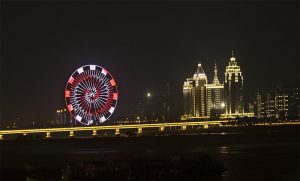 As the capital of Jiangxi, Nanchang represents the cultural and economic heart of the province. Yet the city itself has something of a chequered past. Most of the time, it remained an urban centre of little significance but, at times, it found itself the stage for some of the most pivotal events in Chinese history. It was founded as early as 201 BC and was given the name Nanchang or “Southern Flourishing”, which was derived from a statement by Emperor Gaozu of the Han Dynasty (206 BC–220 AD) about the importance of expanding his influence in southern China. However, it wasn’t until the Tang Dynasty (618-907) that the city saw its first major developments. 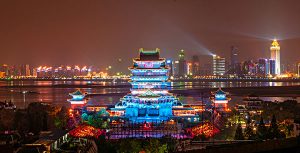 In 653, the magnificent Tengwang or “Prince Teng” Pavilion was constructed and, although it would find itself destroyed and rebuilt several times, it soon came to be known as one of the Three Great Towers in southern China. This was in part due to a poem written by the illustrious Wang Bo in 675, known as “Preface to the Pavilion of Prince Teng”. This literary masterpiece extols the beauty of the pavilion and helped skyrocket the city into national fame. Wang’s work is living proof that the pen is truly mightier than the sword!

In 959, Nanchang experienced another spot of good fortune when it was made the southern capital of the Kingdom of Southern Tang (937–976). However, as the old saying goes, all good things come to an end! Towards the close of the Yuan Dynasty (1271-1368), the city became a battleground between Zhu Yuanzhang, the founder of the Ming Dynasty (1368-1644), and a local warlord named Chen Youliang. Similarly, at the start of the 16th century, it was used as a power base from which Zhu Chenhao, the Prince of Ning, launched a rebellion against the Ming government.

The tragedy deepened when the city was further damaged during the brutal Taiping Rebellion (1850-1864) and, in the late 19th century, its commercial importance began to decline as overland routes were gradually replaced by coastal steamship services. Yet this was all set to change on August 1st 1927. The city became the site of a series of revolts, led by pro-communist Kuomintang[1] officers and organised by the Chinese Communist Party, known as the Nanchang Uprising.

Although they only managed to hold the city for a few days, the soldiers involved provided a core of troops and a method of organisation which eventually inspired the founding of the People’s Liberation Army. For this reason, the Communist Party often regard Nanchang as “the place where the People’s Liberation Army was born”, and the city itself holds a coveted place in the history of Communist China. It is now a popular destination for Red Tourism, but the city has so much more to offer than that!

Situated along the right bank of the Gan River and just 40 kilometres (25 mi) south of Lake Poyang, the largest freshwater lake in China, it is an ideal base for those wishing to embrace the natural beauty of Jiangxi province or experience the migration of some half a million birds that flock to Lake Poyang every year. During winter, the lake is a focal bird-watching spot, as it becomes home to a substantial number of rare Siberian cranes.

If you’re more interested in the city’s ancient history, then the Tengwang Pavilion and the Bada Shanren Memorial Hall are must-see attractions. Although the most recent manifestation of the pavilion was built during 1989 after it was virtually destroyed in 1926, it follows the Song Dynasty (960-1279) style and was based off of Song paintings of the pavilion at the time. These same paintings also served as the inspiration for the corner-towers in the Forbidden City, which were designed to imitate the Tengwang Pavilion. Talk about one serious claim to fame!

From one famous work of art to another, the Bada Shanren Memorial Hall is dedicated to the celebrated painter Zhu Da, who adopted the pseudonym Bada Shanren during the Qing Dynasty (1644-1912) in order to hide the fact that he was a descendant of the Ming Dynasty prince Zhu Quan. The memorial hall itself is based on the design of the Qingyunpu Taoist Temple, which is where Zhu Da took refuge during the early years of the Qing Dynasty.

For over 300 years, his ink wash paintings have been regarded as some of the finest masterpieces of the Ming and Qing dynasties. Walking through the tranquil gardens of the complex and marvelling at his delicate brushwork, you’ll be sure to lose yourself in the beauty of Nanchang. That being said, if you’re after a little more excitement, you can always take a turn on the 160-metre (525 ft.) tall Ferris wheel known as the Star of Nanchang!

[1] Kuomintang: Also known as the Chinese Nationalist Party. They were the ruling party from 1928 until their defeat at the hands of the Communists in 1949. They retreated to Taiwan, where they still play an active political role.