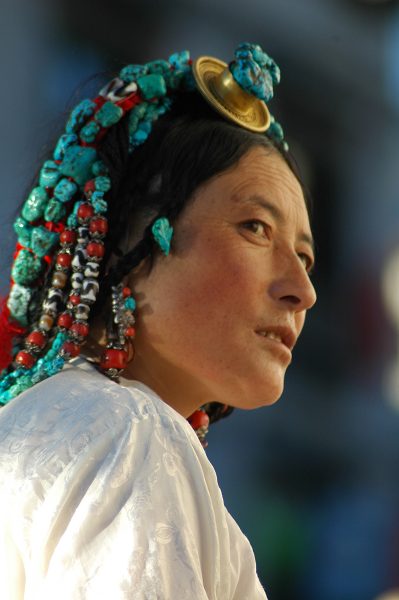 In spite of the hostile environment in which they live, the traditional garments of the Tibetan people are defined by their bright colours and elaborate ornamentation. Like precious stones and glimmering jewels, they stand out on the barren plains of the Tibetan plateau. Tibetans typically don long-sleeved jackets made of silk or cloth, covered by a loose robe tied at the right by a band. Nomadic herdsmen and women working in colder climates eschew the jacket in favour of sheepskin robes fringed with fur. While women tend to wear skirts with a multi-coloured apron over top and men wear trousers, they both opt for leather long-boots to combat the rocky terrain and felt or fur hats to keep themselves warm. For the sake of mobility, many Tibetans leave one or both shoulders uncovered and tie the sleeves around their waist when they are working.

Both genders usually keep their hair long, with men coiling it into a single braid on the top of their head. Girls wear their hair in one braid until they turn seventeen, at which point they plait it into two braids or multiple smaller braids as part of a coming-of-age ceremony. Ornaments play an important role in Tibetan culture, so these braids will be dripping with finery. Historically and culturally speaking, jewellery was the tool used by Tibetans to distinguish the rich from the poor. Poorer nomads would only be able to afford simple jewellery, such as coral pieces, or none at all, while richer nomads would sport silver chains, gold teeth, and large coral earrings.

In contrast to this lavish decoration, the clothes of the Tibetan monks are modest and solemn in nature. They traditionally wear a sleeveless garment known as a kasaya, which translates to mean “colour that is not pure” in Sanskrit. This is thought to derive from the fact that the kasaya is purplish red in colour, rather than being a pure primary colour. It is approximately 2.5 times the length of the human body and is wrapped around the upper body with the right shoulder exposed.

The quality and colour of the cloth used to make the kasaya varies depending on the rank and importance of the wearer. The most eminent monks will have their garments fringed with yellow silk brocade or will wear clothes made from the finest yellow silks and satins. While the style of the kasaya worn by different Tibetan Buddhist sects rarely varies, they each wear different types of hats to distinguish themselves. In short, you should be able to tell them apart at the drop of a hat!