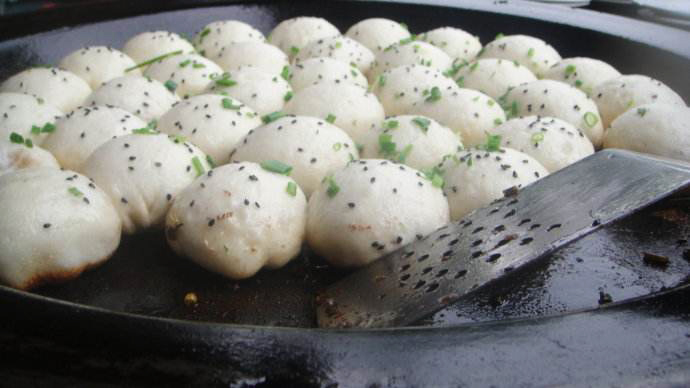 Walk down one of Shanghai’s celebrated snack streets and you’ll be met with a dizzying array of aromas, each one more tempting than the last. From sizzling skewers of tender beef to steaming containers rich with plump dumplings, you’ll be sure to find a treat to suit anyone’s palate. Shanghai cuisine is characterised by its emphasis on three elements: colour, aroma, and taste. Popular ingredients include fresh fish, shellfish, chicken, pork, soy sauce, sugar, and various vegetables. Over time, this has resulted in a myriad of snacks that are light, fresh, and bursting with the natural flavour of their ingredients! 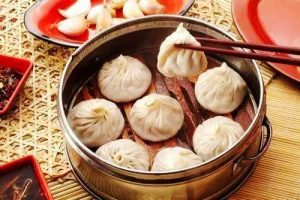 Of all the local delicacies in Shanghai, this is undoubtedly the most well-known. With over one hundred years of history behind it, local vendors have had plenty of time to perfect this sumptuous snack! Xiaolongbao, also known as Shanghai dumplings, are a type of steamed bun made with a thin skin of dough. They are commonly stuffed with pork, although some variations use minced crab meat and crab roe. Xiaolongbao are wrapped and sealed differently to other types of dumpling, and this is because of their one unique ingredient. Each tiny parcel is filled to the brim with a delicious broth!

This is usually made by mixing Shaoxing rice wine with pork jelly, which melts as the dumplings are cooked. That being said, each vendor has their own secret recipe for their signature soup! Although the wrappers may seem delicate, a well-made xiaolongbao will hold in the soup even when it is lifted up with a pair of chopsticks. A batch of these tasty treats are typically steamed in a bamboo basket before being served with a sauce made from black vinegar and, in some places, shredded ginger.

Remember, these aren’t just your average dumplings, and you’ll want to eat them in the correct way to avoid a scalded tongue! The best way to eat xiaolongbao is to place it on a spoon, bite off the top, drink the soup, then dip the remaining dumpling in the vinegar sauce before eating it. The most well-known type of xiaolongbao, known as Nanxiang Xiaolongbao, is usually stuffed with pork, pork jelly, ground sesame seeds, shredded bamboo, and shrimp. It comes from Nanxiang Township in Shanghai’s suburbs, although it can be found throughout the city. 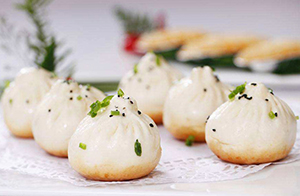 Shengjianbao or Pan-Fried Pork Buns are Xiaolongbao’s chubby cousins. They’re bigger, bolder, and bursting with flavour! Like Xiaolongbao, Shengjianbao have been a popular local snack in the region for over a hundred years. They are made by wrapping fresh pork and pork jelly in a dough made from half-risen flour. This dough is made using yeast, meaning it’s a little thicker than your average dumpling skin, and the topknot is tucked underneath rather than sitting on top.

The buns are pan-fried, with cold water being periodically added to the pan. A lid is used to cover the buns and keep in the steam. This results in the bottoms of the dumplings being fried, while the tops are steamed. Right before they are fully cooked, a smattering of chopped spring onions and sesame seeds are sprinkled on top of the buns. The perfect Shengjianbao has a thin skin, a fragrant filling, and a crispy golden base. Many restaurants throughout Shanghai serve variations on this simple treat, including ones filled with chicken and crab meat. 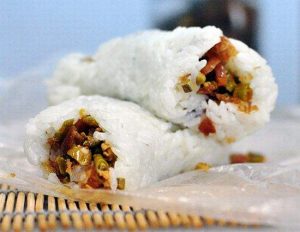 Known as one of the “Four Heavenly Kings”, Cifantuan is one of the four most popular breakfast foods in China. It originates from Shanghai and is made by wrapping a piece of fried dough, known as youtiao, in glutinous rice. It comes in two varieties: sweet and savoury. Sweet Cifantuan is made by simply adding sugar and sometimes sesame paste to the filling, while the savoury version includes ingredients such as pickled vegetables, salted duck eggs, and shredded pork floss. They are particularly popular in Taiwan, Hong Kong, and eastern China, where they’re eaten with sweet or savoury soy milk as part of a balanced breakfast. Modern variations on the traditional Cifantuan have been adapted in Taiwan and Hong Kong before being re-introduced to Shanghai. 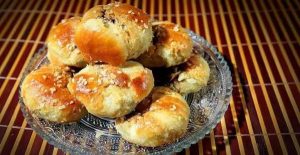 Don’t let the name fool you, Crab Shell Cake is named for its colour, not its content! The name derives from the snack’s distinctively yellowy brown hue, which is said to resemble that of a cooked crab shell. The outer casing is a type of shortbread made from flour, oil, and sesame seeds, which is stuffed with sweet or savoury fillings. While some variations of Crab Shell Cake do contain crab meat, other popular ingredients include pork, shrimp, sugar, rose petal paste, sweet red bean paste, and jujube paste. The cake’s delightfully crispy exterior is complemented perfectly by the smooth texture of its filling. 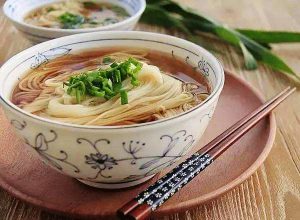 According to the Chinese lunar calendar, the tenth month is referred to as “Little Yangchun”, and it is a local Shanghai-ese custom to use “yangchun” as an alternative term for the number “ten”. When these noodles first became popular in the area, they only cost a meagre 10 fen[1], so the local people naturally began called them Yangchun Noodles. Like an embarrassing nickname, this title seems to have stuck! These noodles are served simply in a clear soup, usually with a dash of scented scallion oil to give them an added kick.

[1] Fen: A unit of currency that is used throughout China. One fen is equal to one-hundredth of a yuan or one-tenth of a Chinese jiao.