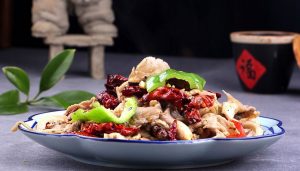 Of the Eight Great Culinary Traditions of Chinese Cooking, Sichuan cuisine is arguably the most popular. Thanks to its liberal use of fiery chillies and Sichuan peppercorns, most people immediately characterise it by its unparalleled levels of spiciness, but there’s so much more to it than that. As an old local saying goes: “one dish, one flavour; one hundred dishes, one hundred flavours”. Although many of the most famous Sichuanese dishes are spicy, the cuisine itself is renowned for its numbing, sour, salty, tender, umami, and sweet flavours, which are typically intermingled to create a symphony of taste.

In fact, Sichuan cuisine didn’t even acquire its most notorious ingredient, the red chilli, until about 400 years ago. According to historical records, during the Three Kingdoms Period (220-280 AD), the region roughly known as modern-day Sichuan province was famed for its sweet food. During the Jin Dynasty (265-420), pungent dishes that were rich in ginger, garlic, onions, mustard greens, and spring onions became more popular. It was only during the 16th century, when Portuguese sailors finally introduced chillies from South America into China, that Sichuan cuisine developed into the spicy sensation we know today.

Since hot chillies are believed to open up the pores and drive out internal dampness, they became particularly popular in Sichuan province, which suffers from high humidity in summer and rainy or overcast weather throughout the year. The cuisine’s other signature ingredient, the Sichuan peppercorn, adds a unique lemony tang to each dish and creates a tingly, numbing sensation in the mouth. Unlike other famous regional cuisines, which were conventionally reserved for the upper class and wealthier members of society, Sichuan cuisine was eaten by nobles and peasants alike. So, if you want to truly live like the common people, be sure to try a few of these signature dishes! 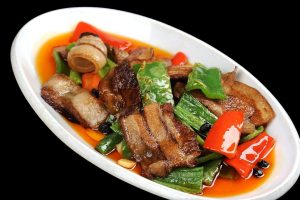 Twice-Cooked Pork is so-named because the dish’s main ingredient, the sumptuous pork belly, is simmered, left to rest, and then stir-fried. In short, this is a dish so nice they cooked it twice! In order to make it, the pork belly steak is first simmered whole in water with a mixture of spices, such as ginger, star anise, cloves, and salt. The meat is then refrigerated to firm it up before it is delicately cut into thin slices.

These slices are stir-fried in a wok with a plethora of vegetables, such as white cabbage, bell peppers, onions, and spring onions, along with an aromatic sauce made from Shaoxing rice wine, soy sauce, ginger, sugar, and doubanjiang or broad bean chilli paste. Much like Tea-Smoked Duck, this dish is mild rather than spicy and harkens back to Sichuan’s ancient past, as it was popular in the region as far back as the Qin Dynasty (221-206 BC). Nowadays this dish is a staple throughout homes in the province, and is rich with home-cooked flavours that offer an authentic taste of Sichuan. 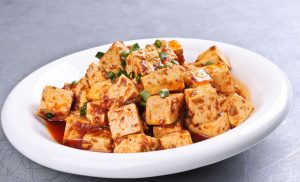 We’re heading out of the frying pan and into the fire with this notoriously spicy dish! Mapo Tofu, which literally translates to mean “Pockmarked Granny Tofu”, is one of Sichuan’s hottest signature dishes and was supposedly so-named because it was created by a famously pockmarked old woman whose name has been tragically lost in the annals of time. Cubes of silken tofu are suspended in a bright red sauce made from red chillies, Sichuan peppercorns, chilli oil, garlic, Shaoxing rice wine, and broad bean chilli paste, along with pork mince, water chestnuts, onions, wood-ear mushrooms, and a variety of other vegetables.

As one of the most popular and simplest dishes in the Sichuan canon, it is surprisingly easy to find both inside and outside of China. That being said, you’ll have to go to the source if you want to experience authentic, fiery Mapo Tofu. While it is undeniably spicy, it offers up a smorgasbord of flavours and has been described by chefs as numbing, fresh, tender, soft, aromatic, and even flaky. With so much going on, you’re sure to feel tongue-tied after trying this diverse dish! 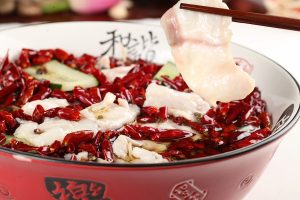 Shuizhu or “water-cooking” is a popular method employed in Sichuan cuisine, and is primarily used to retain the sumptuous moistness of meat. While Water-Cooked Beef is the more common dish, Water-Cooked Fish offers up slices of fresh white fish that absorb the multifarious flavours of the sauce and simply melt in the mouth. The flesh of the fish is first rubbed in starch and a little salt before being poached in water for about 30 seconds, just enough time to remove the rawness while still preserving the meat’s natural tenderness.

Once it has been poached, the meat is placed in a serving dish with a hearty helping of boiled vegetables, such as bean sprouts, white cabbage, and mushrooms. Dried chillies, Sichuan peppercorns, chopped garlic, and broad bean chilli paste are then sprinkled over the meat. Finally, vegetable oil is heated in a wok until it is nearly smoking before being poured over the meat and vegetables. The result is a veritable volcano of hot and tangy flavours, which are perfectly complemented by the soft texture of the fish. 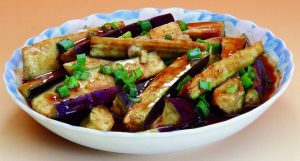 Before you start to think there’s something fishy going on, think again! The term yuxiang or “fish-fragrance” refers to a particularly kind of sauce that originates from Sichuan cuisine. The sauce itself doesn’t actually contain any seafood and doesn’t even really smell of fish. The name is instead derived from the fact that many of the seasonings in the sauce were based on ingredients traditionally used to cook fish.

The famed sauce is made by sautéing a basic mixture of garlic, spring onions, and ginger, which is further enhanced by adding sugar, salt, doubanjiang or broad bean chilli paste, pickled red chillies, and soy sauce. These ingredients are fried in oil until they become fragrant. Water, starch, sugar, and vinegar are then added to thicken the sauce before it is ladled over chunky slices of braised eggplant. The soft texture of the eggplant means it absorbs the sauce beautifully, making for a mildly spicy dish that glances off the tongue.