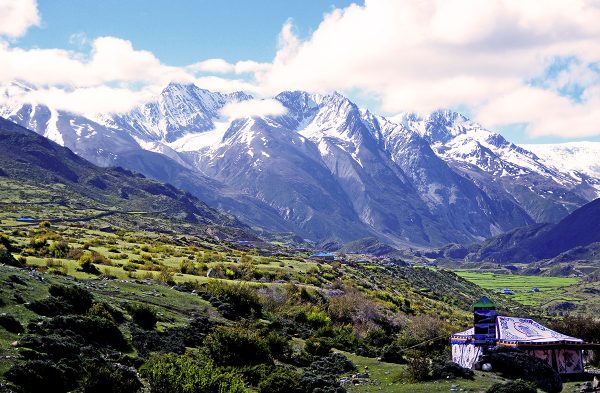 Like its counterpart in James Hilton’s novel The Lost Horizon, Shangri-La (Xamgyi’nyilha) County in northwestern Yunnan is an isolated paradise awash with snow-capped mountains, colourful flowers, sparkling lakes, and lush pine forests. It was originally named Zhongdian but was renamed in 2001 in an effort to boost foreign tourism in the area. Yet, in spite of the mystical name change, the area is still relatively quiet and provides a welcome break from the thronging tourist crowds of Lijiang and Dali. The county rests on the border where Yunnan, Tibet and Sichuan meet and is home mainly to the Tibetan ethnic minority, who still refer to it by its traditional name of Gyalthang or Gyaitang, meaning “Royal Plains”. With names as grand as these, the county has a hefty reputation that it nonetheless manages to live up to.

While the county city, aptly named Shangri-La, is split between the Han and Tibetan ethnic groups, the county also plays host to a smattering of 13 of China’s ethnic minorities, including communities of the Naxi, Bai, Yi and Lisu people, and the surrounding countryside is entirely dominated by Tibetan villages. Thus it’s the ideal place to learn about Tibetan culture and experience life in a Tibetan village first-hand. In the southeast section of the city, you’ll find Dukezong or Dorkhar Old Town, a small Tibetan town that has thrived for over 1,300 years. Tragically large parts of the old town were destroyed during a fire in 2014 but, thanks to evacuation efforts and extensive rebuilding, no one was harmed and the district is still open for tourism.

Thankfully Guishan Temple was not damaged in the fire and is still home to a handful of Buddhist monks who perform daily morning prayers. Alongside the temple you’ll find the ancient Zhuangjin Tong, a 21 metre-high (69 ft.) prayer wheel that contains 100,000 smaller wheels. To put that into perspective, it’s seven times the size of an African Elephant! It is considered to be the largest of its kind in the world and takes six people just to spin it. So next time you’re in the supermarket and you’re pondering how difficult it is to push your trolley around, remember those poor weary monks pushing that colossal wheel.

Just an hour’s walk north of Dukezong, the Gandan Sumtseling Monastery has garnered great fame as the largest of the 24 Tibetan monasteries in Diqing Prefecture. The temple complex is home to over 600 Buddhist monks and is the ideal place for visitors to learn more about this ancient, mysterious religion. Yet it is once you leave the urban areas of Shangri-La that you begin to appreciate its true beauty. The county is home to three of the most famous mountains in Yunnan, known as Meili, Baimang, and Haba Snow Mountain, and the Tibetan people consider Meili Mountain so sacred that it is one of only eight mountains they actively worship. Thus climbing it is both sacrilegious and illegal but, with its tallest peak Kawagarbo reaching a whopping 6,740 metres above sea level, we sincerely doubt there are many mountaineers itching for this virtually insurmountable challenge!

Both Meili and Haba Snow Mountain make up part of the Three Parallel Rivers National Park and the Haba Mountain also makes up one side of Tiger Leaping Gorge. The county is full to bursting with some of the greatest natural tourist attractions in China but, if you fancy avoiding the dizzying altitudes of these mountain parks, the Pudacuo National Park is a more forgiving place where tourists can marvel at the rich biodiversity of the region without having to worry about passing out! It was the first national park in China to meet the IUCN’s[1] standards and is home to over 20% of the country’s plant species and one-third of its mammal and bird species, with almost 100 of these being currently endangered. Throughout spring and summer the park is covered in a blanket of orchids, camellias, azaleas and numerous multi-coloured flowers that make its meadows appear almost ethereal.

We recommend visiting Shangri-La between March and October since frequent snowstorms cause the area to practically shut down during the winter months. Throughout mid to late June a horse-racing festival is held in the city of Shangri-La and, although the festivities are heavily crowded, it’s a wonderful way to connect with the local culture and witness some traditional dancing, singing, and of course horse-racing!

[1] IUCN: The International Union for Conservation of Nature