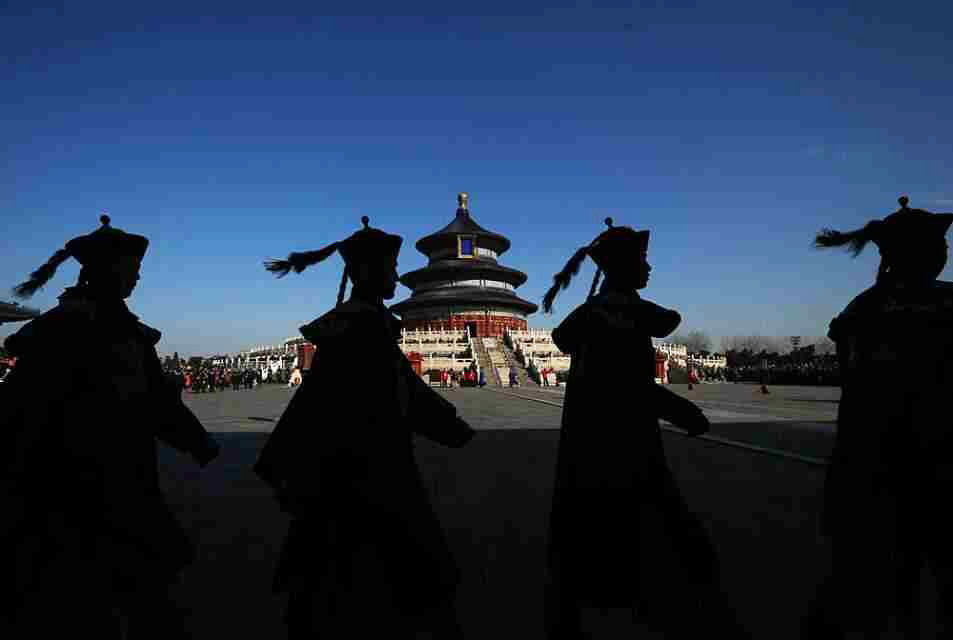 At the start of the 17th century, major economic crises, political corruption, and natural disasters sounded the death knell for the Ming Dynasty (1368-1644). A climactic phenomenon known as the Little Ice Age shortened the growing season, decimated crops, and triggered large-scale flooding, while new trade restrictions in Spain and Japan caused the country to lose its main supply of silver and inflation rates meant that peasants could no longer afford to pay their taxes. The widespread loss of life was catastrophic and, in response, rebellions sprang up across the country.

Meanwhile, in the northeastern region of Manchuria, an ambitious Jurchen leader named Nurhaci had been amassing power. By 1621, he already controlled the northeastern segment of the Ming Empire near the Great Wall’s Shanhai Pass. In 1635, Nurhaci’s son Hong Taiji took over and changed the ethnic name of his people from the Jurchens to the Manchu. In the following year, Hong announced the founding of the Qing Dynasty, which implied he already had ambitions to be Emperor. Little did he know that he’d just established the last imperial dynasty in Chinese history. During this time, many Han Chinese people defected to the Qing and joined their military force, known as the Eight Banners[1].

In 1644, a rebel leader named Li Zicheng captured the imperial capital of Beijing and the last Ming emperor tragically hung himself on a tree outside of the Forbidden City. Li then sent an army to confront the Ming commander Wu Sangui, who was stationed at Shanhai Pass. Wu soon found himself sandwiched between Li’s army and that of the Manchu’s. Talk about being between a rock and a hard place! In a desperate attempt to defeat Li, Wu allied with the Manchu people and allowed them through the gates. They went on to conquer Beijing from Li, but seized the imperial throne in the process! Hong Taiji’s son formally took control of China as the Shunzhi Emperor.

However, it wasn’t until 1683 that the Manchu were finally able to quash the last of the Ming loyalists, Zheng Chenggong (Koxinga), at his stronghold in Taiwan. This was accomplished under the reign of the Kangxi Emperor, who was the longest-reigning emperor in Chinese history, after serving for a staggering 61 years! He proved to be one of the most adept rulers of the Qing Dynasty, and his actions ushered in an era of prosperity that would last until the end of his grandson the Qianlong Emperor’s reign.

Qianlong’s rule started out promisingly enough. His Ten Great Campaigns extending Qing territory into Central Asia and the population rose to an impressive 400 million but, since he had fixed the taxes at a low rate, an economic crash was inevitable. As time went on, the imperial court became progressively more corrupt. The ruling elite remained set in their traditional ways and refused to adapt to a modernising world. While European countries embraced industrial advancements, China remained trapped in a bubble of antiquity. Although in the beginning they had largely been at the forefront of the world market economy, by the 1820s and 1830s rising opium imports ushered in a period of economic depression.

When the First Opium War (1839–1842) took place between China and the United Kingdom, the Qing Empire was technologically so far behind that they were easily defeated. This allowed European powers to enforce the hugely unequal Treaty of Nanking, which granted several foreign countries free trade, extraterritoriality, and control over certain treaty ports. It was at this point that Hong Kong fell under British control, a situation that would last until 1997! The humiliation that the Qing suffered at the hands of foreign powers, coupled with widespread famine and natural disasters, eventually led to a series of brutal revolts. The worst of these was the Taiping Rebellion (1850–1864), during which an estimated 20 to 70 million people died. It still ranks as one of the bloodiest conflicts in world history.

Although during the 1860s there was a brief revival of support for the Qing rulers during the Self-Strengthening Movement, these hopes were quickly dashed during the First Sino-Japanese War (1894-1895), when the Qing lost its influence over Korea and its possession of Taiwan. While the Guangxu Emperor tried to improve the political situation with the ambitious Hundred Days’ Reform in 1898, these were swiftly reverted by a ruthless and powerful figure known as Empress Dowager Cixi. She may not have been the official ruler, but she had controlled the imperial court from behind the scenes since 1861.

Eventually, the significant influence that foreign powers exerted over China proved too much and a violently anti-foreign movement known as the Boxer Rebellion (1899-1901) began. Their followers burned down Christian churches, slaughtered Christian missionaries, and wreaked havoc on foreign communities. While the Qing court didn’t openly support the rebellion, Empress Dowager Cixi secretly enjoyed watching her foreign rivals suffer and did nothing to stop it. When the Eight-Nation Alliance invaded China to stop the rebellion without prior warning or consent, Cixi declared war on them.

The war was an unmitigated disaster and, after a crushing defeat, the imperial court was forced to flee to Xi’an. In 1901, the Emperor was made to sign the Boxer Protocol, which allowed foreign troops to be stationed in Beijing and necessitated that huge sums of money be paid to the Eight Nations as compensation for the war. Meanwhile, along with other revolutionaries, a man named Sun Yat-sen was campaigning to transform the Qing Empire into a modern, republican nation. In 1908, the Guangxu Emperor died suddenly from arsenic poisoning and Empress Dowager Cixi passed away just a day later.

With the weak child emperor Puyi installed on the throne, the revolutionaries saw their opportunity for change. By 1911, local uprisings escalated into the pivotal Xinhai Revolution and, on February 12th 1912, the last emperor of China abdicated in favour of Sun Yat-sen, the first president of the Republic of China. After over 2,000 years, imperial rule in China finally came to an end.