Yu Opera is the third most popular style of Chinese opera in the country, ranking just below Peking Opera and Yue Opera. The term “yu” is actually an abbreviated name for the province of Henan, which is unsurprisingly where this style of opera originates. Like the artist formerly known as Prince, this was the style formerly known as Henan Bangzi[1]! The name was officially changed after the People’s Republic of China was founded in 1911. Although it is largely endemic to Henan, there are professional Yu Opera troupes scattered throughout the provinces of Hubei, Anhui, Jiangsu, Shandong, Shanxi, Shaanxi, and numerous others.

The style itself dates back over 400 years ago, but it didn’t become truly popular in northern China until the late Ming Dynasty (1368-1644). In the beginning, it was characterised by its simple folk stories and soulful arias, without the use of make-up, lavish costumes, or even accompanying instruments. Its rustic charm meant it was beloved by the common people and this lead to its rapid development. Small performances were mainly held in teahouses throughout the city of Kaifeng but, as the art spread to other cities, new sub-styles began to develop. It’s true what they say: immature artists imitate, mature artists steal, and great artists make it into something better, or at least something different! 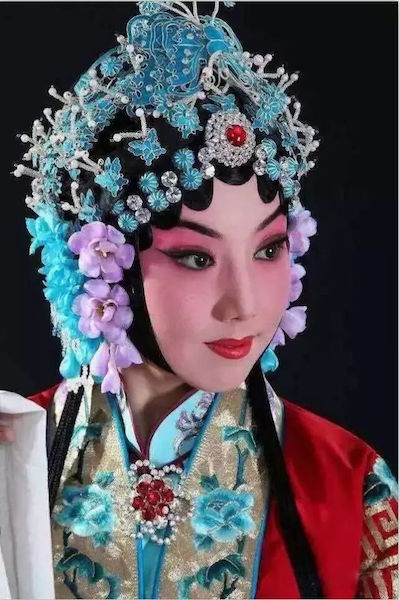 Nowadays it is generally separated into four sub-styles: Xiangfu, which originated from Kaifeng; Yudong, which arose in the Shangqiu region of eastern Henan; Yuxi, which became popular in the area surrounding the city of Luoyang; and Shahe, which came from Shahe County. Of these, the Yudong and Yuxi sub-styles are the most prevalent, and are known for their comedies and tragedies respectively.

Overall the style of Yu Opera is renowned for its high-pitched singing, fast-paced dialogue, powerful rhythms, stylised dancing, and use of martial arts. As time went on, musical accompaniment was added, and eventually developed into grand orchestras complete with gongs, drums, traditional Chinese instruments such as the erhu[2] and the suona[3], and typical Western instruments like the violin and cello. Like many other styles of Chinese opera, an actor’s persona is portrayed through their make-up and costume, conveying stock characters like the scholar, the beautiful woman, the soldier, or the clown.

Yet it is the stories behind each opera that capture the imagination of its audience. These intricately woven tales describe the lives of the people or local folklore using simple language, costumes, and sets. In many ways, it’s said to resemble the people of Henan province, who are known to be outspoken, straightforward, down-to-earth, and good-humoured. There are reputedly over one thousand traditional plays in the Yu Opera repertoire, the most popular of which are The Command Mu Guiying and Hua Mulan.

While The Command Mu Guiying is a folktale that is not well-known outside of China, the story of Hua Mulan became the basis of the classic Disney film Mulan. It tells the tale of a young woman who defies tradition and takes her elderly father’s place in the army by disguising herself as a man. After twelve brutal years of war, she is honoured for her service and is able to return home. Move over Xena, because Mulan was the original warrior princess!

Other exemplary plays in the Yu Opera canon include The Clever Magistrate, a story set during the Ming Dynasty about a prime minister’s villainous sister, who is eventually brought to justice by a wily magistrate named Tang; and Chaoyanggou Village, which revolves around a young high school graduate named Yinhuan who struggles with the choice between settling in her fiancé’s backwater village or moving back to the city, only to discover the simple beauty of the local people and their rural lifestyle. Rich with tales of morality, family, love, and loss, Yu Opera takes a candid look at what makes daily life so special.

[1]Bangzi: A Chinese woodblock percussion instrument. Traditionally, two bangzi were used to keep the main tune during an opera, like a primitive form of metronome. Now the term bangzi or bangziqiang is widely used to refer to a type of melody used in Chinese opera.

[2]Erhu: A two stringed bowed instrument that originated from China. It is sometimes referred to as a ‘Chinese violin’.

[3] Suona: A Chinese wind instrument. It is made up of a horn with a double reed that makes a distinctively loud and high-pitched sound. It comes in several sizes and the size of the horn affects the sound it makes. It is used throughout China in ritual music and folk music.