The Qiao Family Compound is widely thought to be the most famous and popular Shanxi Grand Compound in the province of Shanxi, largely thanks to its starring role in Zhang Yimou’s moving drama Raise the Red Lantern. These magnificent courtyard houses were originally built during the Ming (1368-1644) and Qing (1644-1912) dynasties by prosperous families hailing from Shanxi province. Located in the village of Qiaojiabao approximately 30 kilometres (19 mi) from the historic city of Pingyao, the Qiao Family Compound was originally known as Zai Zhong Tang (在中堂) and was constructed in 1756 by a renowned merchant named Qiao Guifa, who made his fortune selling tea and tofu.

However, the Qiao family wouldn’t reach its zenith until the third generation, when Qiao Zhiyong became the head of the family. Qiao Zhiyong was an astute businessman and, during his lifetime, he built up an unparalleled mercantile empire in the province of Shanxi. When he was head of the family, the Qiao clan controlled over 200 shops located throughout the country, including a number of prototype banks, pawnshops, teahouses, and granaries. Of the three great expansions that the Qiao Family Compound underwent, it was Qiao Zhiyong who was responsible for the largest and most extravagant. He was considered such an intriguing figure in Shanxi province that, in 2006, a television series was made about his life, known as Qiao’s Grand Courtyard. In short, he got more than just his fifteen minutes of fame! 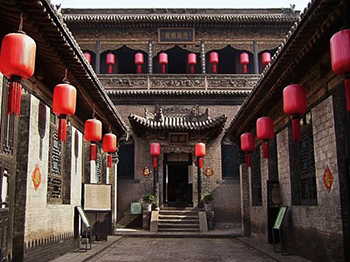 Yet it wasn’t just Qiao Zhiyong’s business acumen that enabled the compound to flourish. During the Qing Dynasty, a military coalition known as the Eight-Nation Alliance was set up in response to the violent Boxer Rebellion (1899-1901) in China. Included in this alliance were the Empire of Japan, the Russian Empire, the British Empire, the French Third Republic, the United States, the German Empire, the Kingdom of Italy, and the Austro-Hungarian Empire. In 1900, the alliance sent troops to liberate their embassy in Beijing, which had been under siege. Once they had resolved the issue with the embassy, they decided to invade and occupy the city of Beijing. Talk about taking liberties!

In response, the governor-general of Shanxi province ordered that all foreigners in the region were to be killed on site. Seven Italian sisters, who were working in the country as missionaries, managed to escape the ensuing panic and eventually arrived at the Qiao Family Compound. They begged Qiao Zhiyong for protection and he allowed them to hide within the compound, which ended up saving their lives. In honour of his benevolence towards their people, the Italian embassy awarded him with an Italian flag, which he proudly displayed within the compound.

Many years later, during the Second Sino-Japanese War (1937-1945), the Japanese army invaded Shanxi province and left destruction in their wake. However, the presence of this flag meant that Japanese troops chose to leave the Qiao Family Compound unharmed, since Italy was one of Japan’s political allies at the time. Having been spared a gruesome fate, the compound was occupied by the Qiao family right up until 1985, when it was converted into a museum. 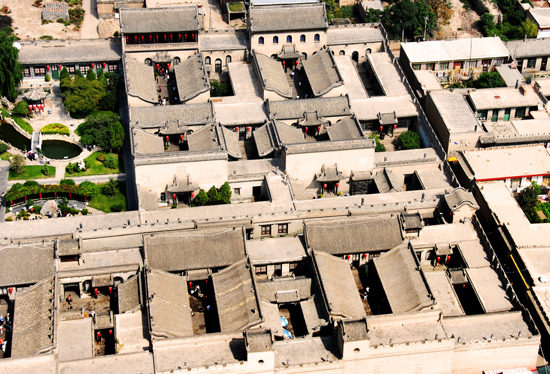 After numerous renovations in its 160-year-long history, it now stretches over a staggering 8,724 square metres (93,904 sq. ft.) and is comprised of 6 large courtyards, 20 smaller courtyards, one ancestral temple, and 313 rooms. Its layout is designed to resemble the Chinese character “囍”, which means “happiness” and is meant to symbolically express the Qiao family’s hope for a bright future. Some of its courtyards are flanked at their entrance by fearsome stone guardian lions, while others have their eaves delicately painted with tableaus of Chinese folk legends or their gates engraved with beautiful patterns.

Each courtyard consists of a principle room, which was reserved for the host and is distinguished by its tiled roof. The side rooms, which were designated for the guests and servants, have brick roofs instead. These differences in style helped to break up the monotony of the architecture, whilst simultaneously indicating the hierarchy of the compound’s residents. A special corridor on each roof enabled guards to patrol the entire compound with ease. Not only that; the compound is entirely surrounded by 10-metre (33 ft.) high walls, which endow it with a fortress-like appearance from the outside. After all, a man’s home is his castle, and castles need round-the-clock protection!

Wandering through the compound’s many rooms and corridors is a banquet of delights, resplendent with some of the finest wood carvings, brick carvings, stone carvings, murals, and wall sculptures in northern China. Nowadays it houses over 2,000 cultural relics, including porcelain, silk embroidery, paintings, and divine furnishings that are sure to transport you back to the luxurious lifestyle of the Qiao family. These lavish decorations are sure to entice you, while the various exhibitions on the history of the Qiao family and the business customs of the Qing Dynasty will provide you with an invaluable insight into life in ancient China. Just don’t stay too long, or you may never want to leave!