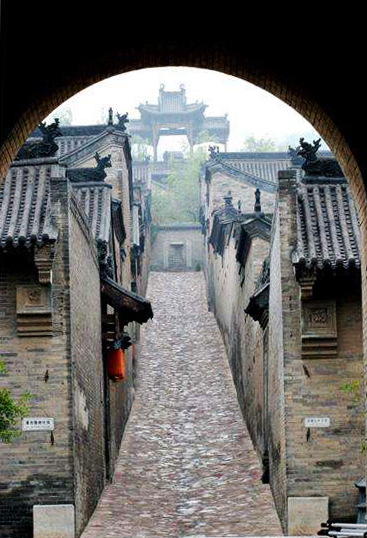 The Wang Family Compound may not be the most popular of the Shanxi Grand Compounds, but it’s actually four times the size of the renowned Qiao Family Compound and even rivals the Forbidden City in its magnitude! Like many of the Shanxi Grand Compounds, it is located in Lingshi County, approximately 35 kilometres (22 mi) from the ancient city of Pingyao. Stretching over an area of 150,000 square metres (1614587 sq. ft.), its vast complex consists of six castle-like courtyards, six lanes, and one street. In-keeping with its legendary size, its five main courtyards were designed to symbolically represent the five lucky animals according to traditional Chinese culture: the Dragon, the Phoenix, the Tortoise, the Qilin (Chinese Unicorn), and the Tiger. In short, you could say the Wang family were living in the belly of the beast!

Like many of the Jin merchant families from this region, the Wang family began as simple farmers and eventually graduated to becoming small time businessmen. During the Ming Dynasty (1368-1644), they expanded their business gradually and hoped that, ultimately, their efforts would grant their successors the opportunity to gain official positions in the government. By the Qing Dynasty (1644-1912), the family had reached the peak of their prosperity and over 100 members of the Wang family were high-ranking officials! Unfortunately all this good work would be undone towards the end of the dynasty, as future generations of the Wang family lacked their forebears’ ambition. After having lived in this grand mansion for 27 generations, the last members of the Wang family left in 1996 and it was opened to the public in 1997.

Nowadays, only two of the colossal courtyards and one of the ancestral halls are open to tourists, comprising a total of 123 smaller courtyards and over 1,100 rooms. The complex has been separated into three main areas: the Red Gate Castle; the Gao Jia Ya or East Courtyard; and the Chongning Bao. Built from 1739 to 1793, the Red Gate Castle covers a colossal 25,000 square metres (269,098 sq. ft.) and contains 29 courtyards. Its name is derived from its characteristic red gate, which is the only one in the compound, and its layout is designed to look like the Chinese character “王” (Wáng), which means “king”. It should come as no surprise that this character happens to be the Wang’s family name. Talk about making something in your image! It thus seems quite fitting that the Wang Museum, which details the history of the family, should be found in the Red Gate Castle.

The Gao Jia Ya, which was constructed between 1796 and 1811, may not be as expansive as the Red Gate Castle, but it boasts some of the finest woodcuttings, stone-carvings, and brick sculptures in the compound. It is a somewhat labyrinthine structure, consisting of multifarious courtyards and connecting alleyways. Nowadays it is also used to exhibit a lavish collection of items that once belonged to the Wang family. Similarly, the Chongning Bao is now used primarily to display elegant paintings and woodcuttings by the celebrated artist Li Qun. On August 18th of every year, a Tourism Festival is held in the Wang Family Compound, where visitors have the opportunity to watch and take part in traditional folk activities. It’s the ideal time to embrace the ancient culture in which this grand work of architecture was conceived.

Find more stories about Wang Family Compounds and Jin Merchants on our tour: Explore Chinese Culture through the Ages