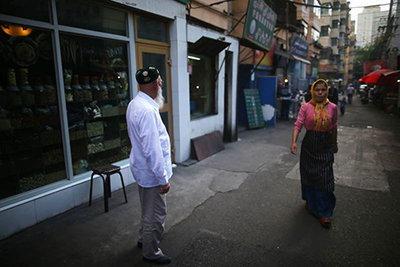 The customs and taboos of the Uyghur ethnic minority have been informed primarily by their rich history and their pious belief in Islam. When receiving guests, the host will typically offer them the best seats, treat them to some tea or milk, and then provide them with some small snacks, such as dried fruit or sweetmeats. If you are offered a drink, be sure to take the cup with both hands as this is a sign of courtesy. The same applies if you are being offered a gift.

When dinner is ready to be served, the host will bring a kettle of water and invite the guests to wash their hands. This is because many Uyghur signature dishes, such as zhuafan or “hand rice”, are eaten with the hands or using a piece of naan bread rather than with cutlery. It is important to note that you should never place the naan bread upside down while eating it. According to their Islamic faith, Uyghurs are forbidden from eating pork and they also cannot eat any animal that has not been killed by a butcher in the traditional halal way.

When it comes to dining etiquette, it is considered extremely rude for a guest to fiddle with the food in their dish, put back any food that they’ve taken, or leave some food in their bowl. If any food is dropped during the meal, the guest should quietly pick it up and wrap it in a tissue. Once the meal is finished, the elderly members of the household will lead the group in a profound act of worship known as a Dua[1]. Guests should remain in their seats and try to stay as still as possible during the Dua.

[1]Dua: The term “dua” is an Arabic word that roughly translates to mean “supplication” or “invocation”. Within the Islamic faith, it is an act of worship whereby the worshipper calls out to Allah and expresses their devotedness to him.