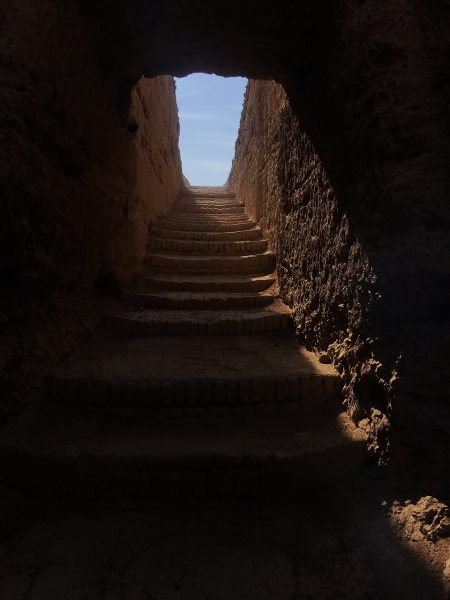 Buried deep beneath the earth, with only small heaps of sand to designate them, the Astana Cemetery is perhaps one of the humblest burial sites you’ll find in China. Amongst the colossal mausoleums, forests of steles[1], and entire clay armies dedicated to China’s many emperors, the rulers of Gaochang opted for a more modest way to inter their remains. Had it not been for the efforts of numerous archaeologists, we may still not know that these tombs even existed! They rest about 37 kilometres (23 mi) southeast of Turpan and 6 kilometres (4 mi) north of the Gaochang Ruins.

This was once a public cemetery, where both aristocrats and commoners from the ancient city of Gaochang were buried. Of the 1,000 tombs that make up the complex, a staggering 456 have been excavated since its discovery, but none belonging to Gaochang’s rulers have as yet been found. Books found within the tombs suggest that the complex was established in 273, during the Jin Dynasty (265-420), and was abandoned around about 778, during the Tang Dynasty (618-907). After being used for over 500 years with no foreseeable retirement, you can see why the Astana Tombs chose to bury their heads in the sand!

During the start of the 20th century, famed archaeologists such as Sergey Oldenburg, Albert von Le Coq, and Aurel Stein descended on the area and each vied for a chance to excavate the tombs. This mayhem led to many of the precious relics being stolen by said archaeologists and shipped back to their home countries for exhibition in their national museums. Talk about taking advantage of a country’s hospitality! It wasn’t until 1959 that Chinese archaeologists undertook excavations at Astana and Gaochang, and they miraculously managed to recover over 10,000 cultural relics, most of which are on display within Xinjiang Museum in Ürümqi.

The tomb complex itself stretches for 5 kilometres (3 mi) from east to west and 2 kilometres (1 mi) from north to south. Simple gravel boundaries have been used to separate the tombs, which typically each belong to one family. Generally speaking husband and wife were buried together, although in some cases a few lotharios have been found accompanied by up to two or three women!

A sloping passageway leads down to the tombs, which are each marked by a rock-cut entrance. They are only about 2 metres (6.5 ft.) high and some of them contain one or two antechambers that feature stone statues or “guardian beasts”. The bodies are often placed at the back of the room on a simple earthen or wooden bed, without any kind of coffin. They are normally clothed in silk, linen, or cotton, and have their heads resting on pillows, a cloth over their face, and a piece of wood clasped between their hands. Several of them were found with coins placed in their mouths, although the origin of this tradition is unclear.

Next to each body was placed a funeral brick, which has the person’s name and information inscribed upon it. These bricks have been invaluable to researchers in terms of identifying the remains and finding out about the lifestyles of these ancient peoples. Around the remains are miniature replicas of carts, horses, musical instruments, chess sets, pens, and anything that could be deemed useful to the dead. The remains of real foodstuffs, desiccated but identifiable, have also been found, including grapes, pears, wheat, meat, and even jam tarts!

Traditionally the Chinese believe that the afterlife is much like life on earth and that you can carry worldly goods with you, so these replicas were designed to provide the deceased with ample supplies on their arrival to the netherworld. For easy reference, a written inventory was placed next to the dead listing all of the items that had been left in the tomb, just in case they forgot anything! Each tomb was equipped with a funerary banner detailing how the mythological figures Fuxi and Nüwa created the world. In honour of these deities, a large statue of them was built outside of the tomb complex after it was rediscovered.

Some of the chambers feature stunning murals of people, animals, mountains, rivers, and other natural scenes. Thanks to the arid climate in the Turpan region, these relics, murals and mummies have been beautifully well-preserved. While DNA-testing has shown that many of the people within the tomb are Han Chinese, several of them are of Turkic, Mongolian, and even Caucasian descent. This suggests that, at some point in its history, Gaochang was a multi-ethnic city where all ethnicities enjoyed relative equality.

Nowadays, only three of the tombs are open to the public and, of these three, only one of them houses actual mummies. While these two mummies can be found encased in glass, the other two tombs yield stunningly well-preserved murals on their chamber walls. The tomb’s proximity to the Gaochang Ruins and the Bezeklik Thousand Buddha Grottoes means that it makes for an interesting pit stop on a tour of the Turpan area. That is, so long as you’re not scared of mummies!