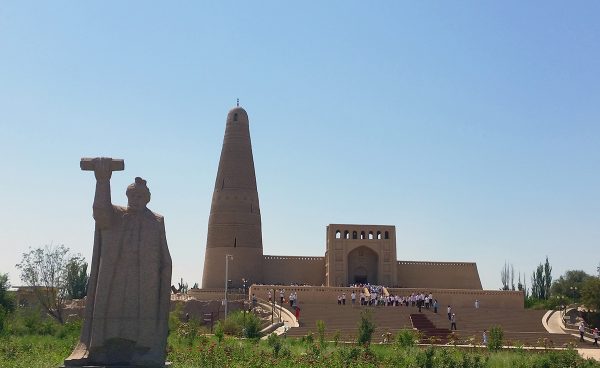 The Emin Minaret is located just 2 kilometres (1 mi) east of Turpan’s city centre and, towering in at 44 metres (144 ft.) in height, it is the tallest minaret in China. Surrounded by willowy trees, dusty fields, and the ancient ruins of the city, it serves as a reminder of the country’s ancient past and the vital historical connections Turpan once had with Central Asia. Those who visit the minaret tend to have mixed feelings about it, with some describing it as a unique combination of architectural styles and others saying it looks like an industrial chimney! Yet this tower’s significance lies perhaps not in its outer beauty, but in the touching story behind its construction.

During the 1750s, a subgroup of Mongolian people known as the Dzungars occupied large parts of Xinjiang and decided to openly rebel against the Qing Empire (1644-1912). The Uyghurs, who had long been at odds with the Dzungars, joined forces with the imperial government and helped defeat them. This coalition was led by a Uyghur general named Emin Khoja, who was subsequently promoted to governor inheritable of Turpan as a reward for his allegiance.

He was an illustrious figure in Turpan’s history and was one of the few local Muslims to have made a successful pilgrimage to Mecca. On his death, his son Suleman succeeded him as governor and used his own money to build the Emin Minaret in honour of his father. Construction of the tower was completed in 1778 and its Chinese name, Sugong Ta, literally means “Governor Su’s Tower”. So if you thought you were a good son remember, Suleman built his father an entire tower! 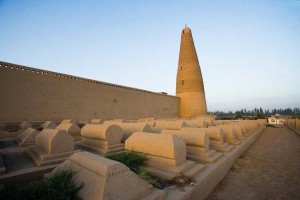 The minaret rests at the northeast corner of a rectangular mosque, which is in turn divided into an inner and outer hall. The outer hall is for use during the warmer months and is made of thin wooden pillars that support an exposed timber frame, making it large and spacious. The inner hall is predominantly used in winter and is thus fully enclosed, meaning it is far smaller.

Perhaps the most interesting aspect of this minaret is the intermingling of features from different styles of architecture. Since the area surrounding Turpan was once the site of several major trading cities along the Silk Road, it also acted as a conduit between Central Asian and Chinese culture. The outer decoration of the Emin Minaret incorporates geometric patterns, which were typical of Middle Eastern Islamic architecture, but also includes floral patterns and waves, which were commonly used in Chinese architecture. The Uyghur people who built these structures had been influenced by these two cultures in equal measure, which is part of what makes their constructions so unique.

These craftsmen used locally sourced materials, so the minaret is predominantly made of wood and sundried mud-bricks. The tower visibly tapers as it rises upwards, with a diameter of just over 14 metres (46 ft.) at the base and approximately 3 metres (10 ft.) at the top. Long, narrow windows are placed at random intervals to provide light and ventilation, and there are no storeys within the structure, only a 72-step spiral staircase leading to a platform at the top. So if you thought your weekly session on the Stairmaster was bad, imagine climbing this tower every morning to perform the call to prayer!

The entrance is flanked by two steles[1]: one with an inscription in Chinese that explains the purpose of the minaret and its connection to the Qing Dynasty, and one in the Uyghur language that extols Emin Khoja and contains excerpts from the Quran. Visitors are no longer allowed to climb the minaret, but are welcome to explore the accompanying mosque.

Make your dream trip to The Emin Minaret come true on our travel: Explore the Silk Road in China