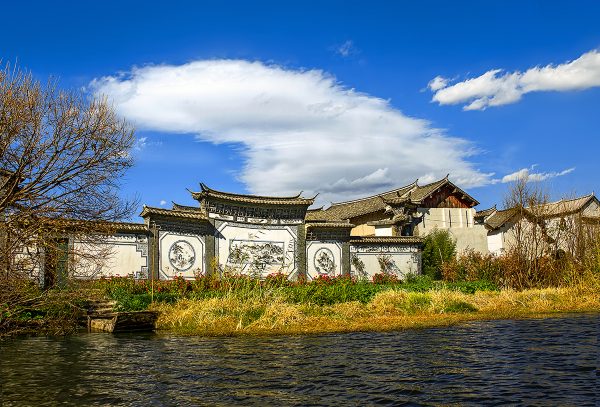 The Bai people who inhabit villages surrounding Dali Ancient Town have become well-known for three characteristic styles of architecture, which are as beautiful as they are complex. These are known as “one house with two cottages”, “three rooms and one wall screening”, and “four houses and five courtyards”. The “one house with two cottages” design is the least popular and simply consists of a two-storey main room flanked by two smaller rooms.

The “three rooms and one wall screening” style is the most popular and is probably the most complicated. The house is made up of one main room and two long side rooms, which are arranged in a U shape. The front entrance is covered by a fourth wall, known as the “wall screening” or “shining wall”. This wall is designed to reflect light back into the main room at sunset and provide a little extra privacy.

It is normally inscribed with a meaningful Chinese proverb, such as “fortune, longevity, and good health” (福寿安康), although in some instances there are only single characters, such as “happiness” (喜), and sometimes whole poems may be used! You can always tell if a mansion belonged to a specific clan because their slogan will cover the shining wall. For example, the Yang family wall reads “Generations of Righteousness”, while the Zhang family wall is inscribed with the words “A Tradition of Tolerance”. It’s the perfect way for your family to be remembered as courageous, wise, and open-minded, even if they were never necessarily any of those things!

Finally, the “four houses and five courtyards” style is made up of four long rooms that have been arranged in a square shape. In each of the square’s four corners there will be a courtyard and the space in the middle of the square makes up the fifth, largest courtyard. The walls of all these homes are made using slaked lime and are painted white, giving them their characteristically bright appearance.

The exteriors are beautifully decorated with hexagonal honeycomb patterns made up of white, black, and dark blue glazed tiles, proving that beehives are a source not only of honey but of architectural inspiration! The interiors are similarly bedecked with colourful paintings, marble ornaments, and elaborate stone inscriptions, making Bai homes some of the most stylish in China.

In a Bai home, even the doors are a work of art! The wooden gates are skilfully carved and the lattices of the main doors are engraved with lively patterns of legendary figures, birds, animals, and flowers. The upturned eaves, stunning woodcarvings, crisp white exterior, and interior decoration combine to give these homes a simple elegance.

The homes in the village of Xizhou are considered some of the most well-preserved and have remained largely changed since they were built during the Qing Dynasty (1644-1912). Many of the local mansions were founded by famous Bai clans and the Yan Family Compound has now been converted into a delightful museum.

Perhaps the most spectacular architectural achievement of the Bai people is the Three Pagodas of Chongsheng Temple. It was built sometime between 823 and 840 AD and has survived numerous natural and man-made disasters over a period of more than 1,000 years. Towering over Dali at over 70 metres (227 ft.) in height, the central pagoda is one of the tallest of its kind in China!