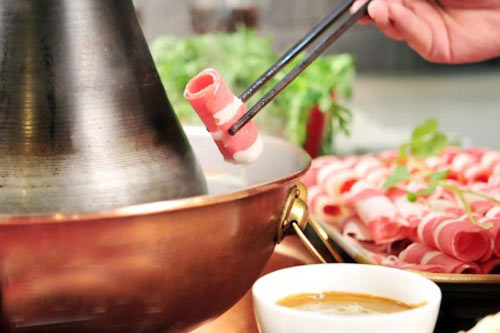 The pot is made from copper and has a coal-burning stove incorporated into its base, which is used to heat the pot and thus the soup inside of the pot. The soup in which the mutton is boiled is considered very good for your general health because of the herbs that are used in it.

Mutton and beef slices are the most commonly chosen types of meat for the hotpot. Fresh mutton has a richer flavour and is more expensive than frozen mutton. Besides mutton and beef, cow stomach, fish, tofu and vegetables are also popular choices for hotpot ingredients. Noodles are generally left to be boiled towards the end of the meal, but some people prefer to use rice cakes instead.

The sauce that you dip the meat into before eating it also plays an important role in the flavour of the dish. The sauce is usually a mixture of sesame seed oil, chilli oil, flowers from the Chinese chive and minced scallion.