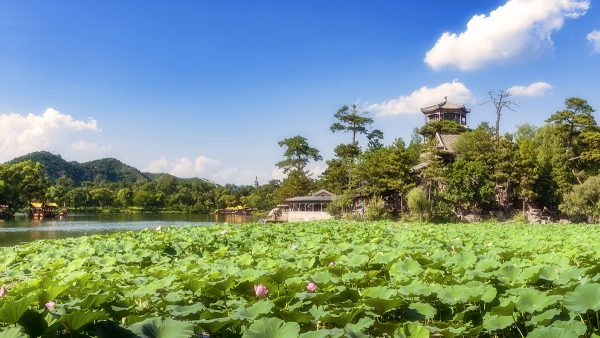 The Chengde Mountain Resort is just north of Chengde and is about 230 kilometres (143 mi) from Beijing. Although it is also known as Rehe Temporary Palace, it has in fact stood tall for nearly 300 years. After all, in a country where some of the bridges are over 1,000 years old, 300 years may still count as temporary! This monumental imperial palace was built during the Qing Dynasty (1644-1912) and was designed to mimic the layout of the country, making it a proverbial mini-China. With its rolling hills, verdant grasslands, shimmering lakes, and dense forests, it incorporates scenery from across the country. This magnificent remnant of China’s feudal pasts was named a UNESCO World Heritage Site in 1994.

According to local legend, the Kangxi Emperor was hunting in nearby Mulan Paddock when he first set eyes on the ancient town of Rehe (modern-day Chengde). He decided to make it the site of his summer resort and began construction in 1703. Eighty-nine years and three emperors later, the complex was finally completed!

The Emperor’s ancestors had been from the grasslands, so Rehe seemed like a natural choice for his summer resort. Not to mention, its Chinese name literally translates to mean “Mountain Estate for Escaping the Heat”, as Rehe’s summer was far more temperate than that of Beijing and so royals would flock to the resort in an attempt to escape the oppressive heat. Yet the motives for building here, though partially personal, were actually far more political.

Mulan Paddock had been established as a way for the Emperor to keep an eye on the northern borders and strengthen his control of the Mongolian region. Every year the Emperor would bring his ministers and royal army, along with his family and concubines, to hunt on these grounds and thus reassert his claim to the territory. This entourage could consist of thousands of people and thus, in an effort to accommodate them, 21 temporary palaces were built. This was the beginning of the Chengde Mountain Resort.

Since Chengde rests further north of Beijing and thus closer to the border between China and Mongolia, the summer resort predominantly functioned as a stronghold to reaffirm the Emperor’s dominance over the Mongolian people and to help him manage defence of the northern borders. Since the seat of government always followed the emperor, Chengde became one of China’s political centres and soon began to grow exponentially.

Throughout summer and autumn of every year, the Kangxi, Qianlong, and Jiaqing emperors would spend vast quantities of time at the resort handling military and government affairs, as well as receiving the leaders of ethnic minority groups and foreign envoys. In fact, they spent so much time at this summer retreat that the Jiaqing and Xianfeng emperors would both die here in 1820 and 1861 respectively. They died as they had lived; surrounded by beautiful architecture and even more beautiful women!

Chengde Mountain Resort covers an area of 5.6 square kilometres (2.2 sq. mi), making it the largest surviving royal garden in the world. To put that into perspective, this makes it about five times the size of the original Disneyland! The resort is surrounded by a colossal wall that is 10,000 metres (32,800 ft.) long and the complex is separated into four areas: the palace area, the lakes area, the plains area, and the hills area.

The Palace Area takes up the southern part of the resort and was designed to resemble the Forbidden City in Beijing, in an effort to help the emperors feel at home. It is split into four parts: the Main Palace, where the emperor would receive officials, nobles, and foreign envoys; the Pine-Crane Hall, which was built by the emperor to house the empress dowager; the East Palace, which was tragically destroyed by a fire in 1945; and the Pine Soughing Valley, which was used by the emperor and his officials as a reading room. The main bed chambers, where the imperial family would stay, can be found in the rear and the main palace has now been converted into a museum, where articles used by the Qing Dynasty emperors are encased in wonderful displays.

The Lakes Area can be found in the south-east portion and is laid out according to traditional Chinese landscape gardening. The area consists of 8 islets and 8 lakes which have each been given a fanciful name to reflect their appearance, such as Mirror Lake, Silver Lake, and Half-Moon Lake. They are surrounded by groups of buildings in an effort to imitate the scenery south of the Yangtze River.

The Plains Area rests in the north of the resort and can be divided into two parts: the western grasslands and the eastern forests. The former was used for horse-racing while the latter was known as the Ten Thousand Tree Garden and served as a political centre where the emperor would receive visitors. The Wenjin Hall, one of the largest imperial libraries in China, sits in the western part of this forest, while other buildings can be found dotted throughout. Another outstanding feature of the plains area is a 70 metre-high (230 ft.) stone pagoda that was built in 1751 and is one of the tallest of its kind.

The Hills Area in the north-west is the largest section of the resort and consists of four huge ravines: Zhenzi, Songlin, Lishu, and Songyun. These fanciful names translate to mean Hazelnut, Pine, Pear, and Pine-cloud Valley respectively. The 40 groups of halls, pavilions, temples, and monasteries that once decorated this vast expanse have now tragically been lost and are evidenced only by their ruins.