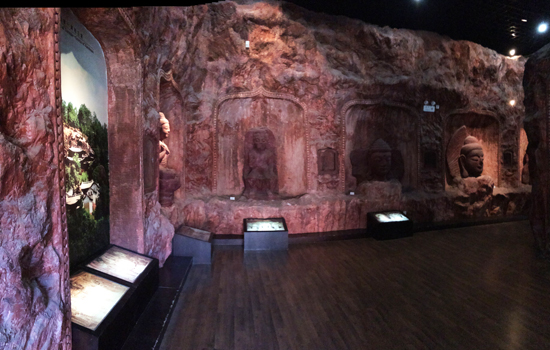 With a history stretching back over 4,000 years, it’s no wonder Dali was the first city in Yunnan to get its own museum. The Dali Prefecture Museum, known to most by its ridiculous long official name of Dali Bai Autonomous Prefecture Museum, was established in 1986 and is free to enter so long as you provide proof of ID. The museum was built in the Bai ethnic minority architectural style, meaning that the building is a cultural relic in of itself. China’s wonderful tradition of “living” museums, where interactive exhibits delight visitors, is what makes them unique and the Dali Prefecture Museum is no different. From its tranquil open-air gardens to its March Celebration activities, this museum is far too lively to start gathering dust anytime soon!

The exhibition halls are all based on the Bai concept of “three rooms and one wall screening, four joints and five courtyards”, which is how most Bai homes look. The first half, “three rooms and one wall screening”, refers to the structure of the main house, which will usually have one main room, two side rooms and a “shining wall” that faces west so it reflects light back into the house at sunset. The second half, “four joints and five courtyards”, refers to the four courtyards in the corners of the house that join the four walls together and the fifth courtyard that sits at the centre. Having adopted this layout, the museum is satisfyingly symmetrical and is permeated by lush cypresses and looming pine trees. The building has been described as a work of art in of itself, and is definitely worth seeing even if you don’t fancy going into the museum.

The Nanzhao Kingdom (738-902) and the Dali Kingdom (937-1253) once ruled over Yunnan and made Dali their capital. Under their reign, Dali prospered as a trade hub and became instrumental in the dissemination of Buddhism throughout the country. This makes Dali Prefecture Museum unique, as its one of the only places where you can find cultural relics from either of these ancient kingdoms. The museum is the central institution in Dali when it comes to conducting research and excavations, amassing collections, and holding exhibitions. This means that, although it is still relatively young, it has managed to accumulate over 7,000 articles for display. So, if you spent just 30 seconds looking at each object in the museum, you’d need two and a half days to get through them all! 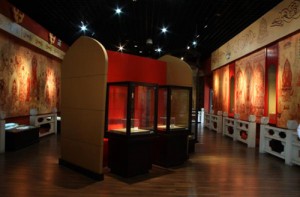 The museum is made up of twelve exhibition halls, eight of which are open throughout the year. These include exhibitions of paintings, stone carvings and cultural artefacts from the Nanzhao and Dali kingdoms, articles of fine marble, chinaware, and bronze relics, items related to Bai folk customs, and historical relics from the Cultural Revolution. While many of the exhibits focus on the founding and history of the Nanzhao and Dali empires, the Bai folk customs exhibition features stunning traditional clothes and craftworks from the Bai ethnic minority and the Modern Revolutionary exhibit tells the story of the patriots who passed through Yunnan during the Long March[1].

Amongst the 7,000 artefacts owned by the museum, several of them are considered priceless. They are the only relics of their kind in the world, so be careful not to press on the glass cases or you’ll be paying for it your whole life! After all, how could you put a price on stunning bronze ornaments dating back to the Warring States Period (c. 476-221 B.C.) or earthenware horses from the Western Han Dynasty (206 BC-24 AD)? From the many marble statues of Buddha through to the Ming Dynasty (1368-1644) golden cap inlaid with shimmering rubies and sapphires, the museum is a banquet of colourful delights that are sure to caress and satisfy the senses.

We recommend visiting the museum from March to June, as the resident camellias will be in bloom and the March Celebration activities will be taking place. Walking through the exhibits, each one more luxuriant than the last, you’ll undoubtedly start to feel like an Emperor strolling through his palace. Just be sure not to start barking orders at anyone, or you might get yourself thrown out!

[1] The Long March (1934-1935): The famous path that the Red Army of the Communist Party took to evade the pursuit of the Kuomintang (Chinese Nationalist Party). Mao Zedong led the retreat and his participation was instrumental in his subsequent rise to power.