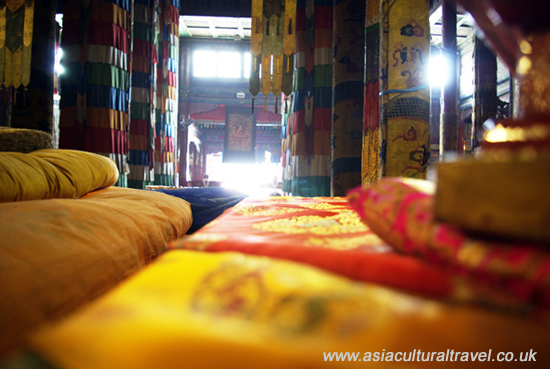 Dazhao Temple is one of the oldest temples in Inner Mongolia dedicated to the Gelugpa branch of Tibetan Buddhism, throughout its long history and in spite of its beauty, it remained largely ignored for a number of years. Like the overlooked middle child, Dazhao simply wasn’t good enough to earn the kind of respect its older brothers in Lhasa enjoyed! Yet that would all change in 1586, after a visit from the 3rd Dalai Lama.

“Dazhao” literally means “Big Temple” and the temple itself was originally built in 1579, during the Ming Dynasty (1368-1644), in the city of Hohhot. In fact, Hohhot may not even exist if it weren’t for Dazhao. Altan Khan, the leader of a Mongol subgroup known as the Tümeds, began building the temple in 1557 in an effort to impress the Ming Court and established the city around the temple as a sort of hugely costly afterthought! Yet it didn’t reach the pinnacle of its fame until 1586, when the 3rd Dalai Lama visited the temple and dedicated a colossal silver statue of Sakyamuni[1] to it. 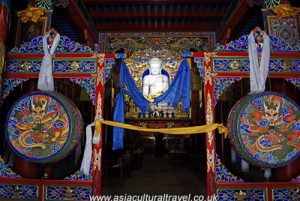 Overnight this appeared to elevate it in status from relative unknown to perhaps the most important Buddhist site in Inner Mongolia. The statue is so integral to the temple’s identity that many people still refer to it as Yinfo or “Silver Buddha” Temple. Thereafter it became a hotspot for ancient Chinese celebrities and was even blessed with a visit by the Kangxi Emperor of the Qing Dynasty (1644-1912) during the late 17th century. His visit was commemorated by a series of stunning murals, which have been beautifully preserved. Yet surprisingly this magnificent statue only narrowly escaped destruction!

During the Cultural Revolution, the temple was converted into a factory and all religious artefacts were meant to have been destroyed. However, at that time, the hall in which the Silver Buddha rested was being used as a storage room. When Red Guards came to ransack the remaining relics in the temple, they didn’t notice the statue behind all of the other stored goods and thus it was spared a gruesome fate! 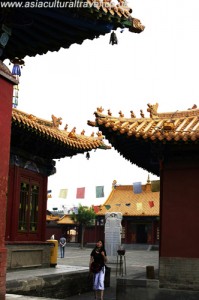 The temple complex itself predominantly follows the Han-style of architecture, although the main hall represents a wonderful intermingling of Han and Tibetan features. The complex is separated into three parts: a two-storey hall at the front, the Jing Tang or Hall for Chanting in the centre, and the Fo Tang or Hall for Worshipping Buddha at the rear. The silver statue rests in the Fo Tang and has done so for the past 400 years. Towering in at an impressive 2.5 metres (8 ft.) in height, it is the largest of its kind in China and is about the same size as an Asian elephant!

It is considered one of the temple’s Three Treasures, along with the remaining murals and the vivid carvings of dragons engraved on two golden pillars that sit either side of the statue. Several of the murals, including those related to the story of Buddha, are now stored in Hohhot Museum in the interests of preservation. The entrance to the Fo Tang is flanked by two lifelike stone statues of lions, and delightful exhibitions of traditional musical instruments and Mongolian dragon sculptures can be found scattered throughout the complex. Just in front of the temple, an old well supposedly boasts the freshest and coolest spring water in the region, further adding to the mystical qualities of this ancient place.

One Reply to “Dazhao Temple”