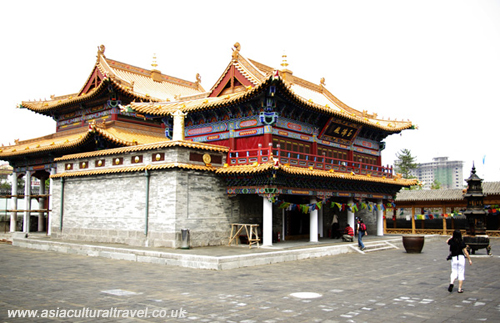 Encircled by the magnificent Daqing or “Great Green” Mountains and situated in the upper valley of the Dahei River, Hohhot is a city surrounded by nature. As the capital of Inner Mongolia, it’s heralded as the political and cultural centre of the region. Its Mongolian name of Kuku-Khoto translates to “Green City”, as it is one of the few urban areas completely surrounded by jade-hued grasslands. With the vast grassy plains before you, the endless sapphire sky above you, and the city’s numerous temples surrounding you, it’s easy to see why it earned such a prestigious title.

The city’s history began in 1557 when Altan Khan, the leader of a Mongol subgroup known as the Tümeds, began building the Dazhao Temple. He wanted to impress the Ming Dynasty (1368-1644) in order to gain access to valuable trade items such as iron, cotton, and crop seeds. After all, as the old saying goes, “if you build it, they will come”, and hopefully bring you gifts! In the process, he established the city of Kuku-Khoto and eventually managed to persuade the Ming imperials to make him their vassal. 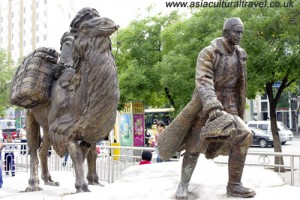 During the 17th century, the Ming court renamed the city Guihua or “Return to Civilisation” and encouraged Chinese agriculturalists to settle there. It grew rapidly as a frontier trading centre, as well as a religious centre for Tibetan Buddhism, and the rich fertile plains allowed the local farmers to prosper. In the middle of the 18th century, a new city known as Suiyuan was established just 4 kilometres (2.5 mi) to its north.

These cities would eventually be combined and collectively named Guisui, which swiftly became a focal trading hub in Inner Mongolia. Originally the old Mongol part of the city served as the commercial centre, while the newer Chinese part was regarded as an administrative and residential area. In 1954 the city was renamed Hohhot and the two districts were merged completely. By 1957, it had developed into the cultural and academic centre of Inner Mongolia and was home to the region’s first university. In short, Hohhot is living proof that knowledge is power!

Thanks to its temperate weather, the city has become a popular summer retreat for domestic tourists and acts as a gateway to the nearby Xilamuren Grasslands. They are about 100 kilometres (62 mi) from Hohhot and are occasionally referred to as the Zhaohe Grasslands. These seemingly endless plains are resplendent with lush green grass and multi-coloured wildflowers, making them the perfect place to hike and relax. 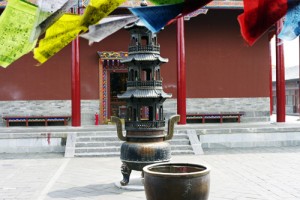 The Dazhao Temple was completed in 1579 and is the oldest Buddhist monastery in the city. Within its confines, a shrine dedicated to the Kangxi Emperor of the Qing Dynasty (1644-1912) takes centre stage and is flanked by murals commemorating his visit to the temple. Yet the temple’s major claim to fame is a spectacular 2.5 metre-tall (8 ft.) silver statue of Sakyamuni Buddha. It is considered one of the temple’s Three Treasures, alongside the murals and the golden pillars on either side of the statue that are beautifully engraved with carvings of dragons.

Just 100 metres (320 ft.) from Dazhao Temple sits the Xilituzhao Palace, the largest Buddhist temple in Hohhot. The term “xilitu” means “holy seat” in Mongolian as this was, and still is, one of the most important houses of worship in Inner Mongolia. It was built during the Ming Dynasty in honour of the third and fourth Dalai Lamas and in commemoration of the Lamas in general. The original temple was quite small but underwent a colossal expansion during the Qing Dynasty. In spite of extensive weathering over a period of 400 years, the temple has remained in relatively good condition.

Alongside these Buddhist temples, there are a plethora of Muslim, Catholic, and Christian houses of worship dotted throughout the city. Most notable of these is the Great Mosque, which was founded during the Qing Dynasty. With its elegant pagoda-style roofs and ornate Arabian windows, the mosque represents a unique blend of traditional Han Chinese and Central Asian architectural features. From the top of its 15-metre (49 ft.) tall minaret, you’ll be treated to a spectacular panoramic view of the entire city.

Similarly the Zhaojun Tomb is regarded as one of the finest attractions in Inner Mongolia and is only about 10 kilometres (6 mi) south of Hohhot. It’s the final resting place of Wang Zhaojun, a beautiful Chinese aristocrat who became the courtesan of a Xiongnu “Chanyu” or chieftain named Huhanye in 33 BC. According to local legend, when all the grass turns yellow in winter, the grass that covers Zhaojun’s tomb miraculously remains green!