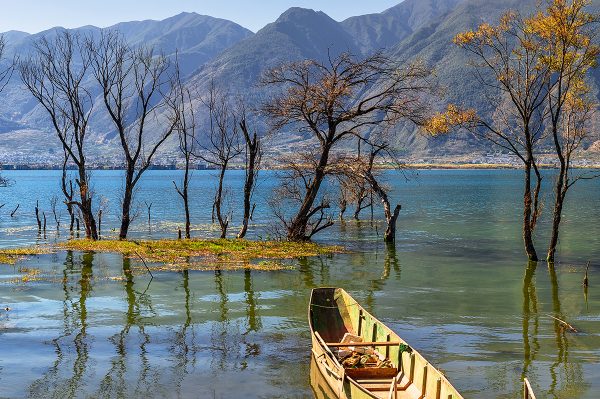 On a sunny day, the snow-capped Cangshan Mountains are reflected in the deep waters of the Erhai Lake, and the seeming inseparability of these two natural wonders gave rise to the local saying “silver Cangshan and jade Erhai”. The name “Erhai” literally means the “Er Sea” and it’s referred to as a “sea” because it covers an area of 250 square kilometres, making it 17 times the size of Lake Windermere, England’s largest natural lake! In fact, the lake is so large that it sports a number of islands, which in turn support small fishing villages and temples.

From the peaks of Cangshan, Erhai Lake looks like a ribbon winding around the coast. It is characterised by its narrowness, being 41 kilometres long but only 3 to 9 kilometres wide. Beneath its murky depths, the lake is home to a diverse community of fish, including 3 species of carp that can only be found in Erhai. This makes the lake an ideal place to fish and for many years it has remained an important food source for the local Bai ethnic minority. If you travel to Erhai, you’ll be treated to a demonstration of the Bai people’s traditional technique of fishing, where they use trained cormorants to catch the fish and return them to the fishermen.

There are plenty of places by the lakeside where you can rent a small boat and venture out onto the waters. You can visit some of the nearby islands, including Jinsuo or “Golden Shuttle” Island, Nanzhao Folklore Island and Xiaoputuo Island, and marvel at a few of the Buddhist temples there. The most magnificent of these temples is considered to be the one on Xiaoputuo Island, which was built during the 15th century. Though it is small, it perfectly exhibits the ancient architectural-style of a typical Buddhist temple and looks particularly beautiful reflected in the lake. Just don’t expect to find any tiny monks inside!

On the lakeside, the stunning Butterfly Spring and charming Erhai Lake Park make for a wonderful day out. The park rests at the base of Tuanshan Peak on the Cangshan Mountains and boasts an arboretum, a public swimming pool, a zoo and a path to an observation deck further up the mountain. In spring, the park is awash with blossoms as the camellias, azaleas, primrose, and numerous exotic trees bloom. Similarly, the Butterfly Spring is a flurry of lively, colourful butterflies, all emerging from their cocoons and gracefully gliding through the air.

Alongside the park, a number of teahouses and restaurants run by members of the Bai ethnic minority provide visitors with a tantalising taste of traditional Bai cuisine. You can even take part in the Three Teas Ceremony whilst casually admiring the beauty of the surrounding landscape. The Three Pagodas, Dali Ancient Town and the Bai village of Xizhou are all within cycling distance of the lake, making it a perfect resting spot on your tour of the region.

One Reply to “Erhai Lake”