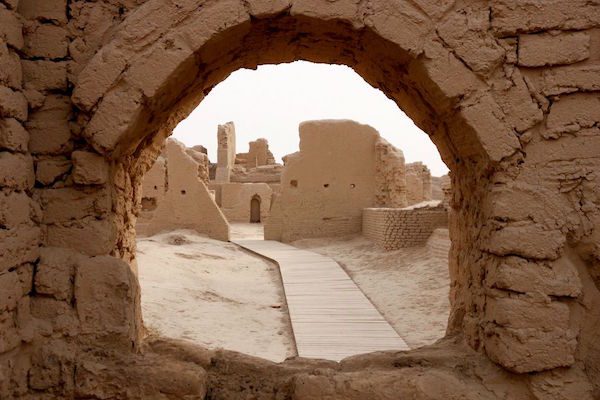 The Gaochang Ruins were once the site of an ancient oasis city built on the northern edge of the unforgiving Taklamakan Desert. They are located at the foot of the Flaming Mountains, about 46 kilometres (29 mi) southeast of Turpan, and have miraculously survived for over 2,000 years. They were incorporated into the Silk Road UNESCO World Heritage Site in 2014 and, thanks to renovations and preservation projects, have since enjoyed a much deserved facelift! Though they may not be in as good a condition as the Jiaohe Ruins, which are about 40 kilometres (25 mi) to their west, they still maintain a certain inimitable charm.

The city was built during the 1st century BC and was ruled by the Cheshi (Jushi) Kingdom, until they surrendered control of the area to the Han Dynasty (206 BC–220 AD) around about 50 BC. It played a focal role as one of the main trade hubs and oasis towns along the Silk Road, making it a prized asset that the Han court was keen to protect. It became the capital of the Gaochang Kingdom (531-640) during the 6th century but returned to Chinese control in 640, when it was conquered by Emperor Taizong of the Tang Dynasty (618-907). However, this would prove to be short-lived as the Tang court was forced to withdraw its military forces from the area in 755. Like a property in Central London, Gaochang’s prime location meant it was incredibly valuable and hotly contested!

By 803, the Uyghur ethnic group had taken control of the city and it became part of the Kingdom of Qocho (856-1335). In 1209 this kingdom came under the suzerainty of Genghis Khan and eventually became part of the Yuan Dynasty (1271-1368), but was seized by a rival Mongolian kingdom known as the Chatagai Khanate from 1275 to 1318. When the Yuan Dynasty eventually collapsed, the trade route that ran through Gaochang was disrupted and war broke out between the Mongolians and the Uyghurs. This warfare greatly damaged the city and this, coupled with the disruption of trade, led to the city being gradually abandoned. 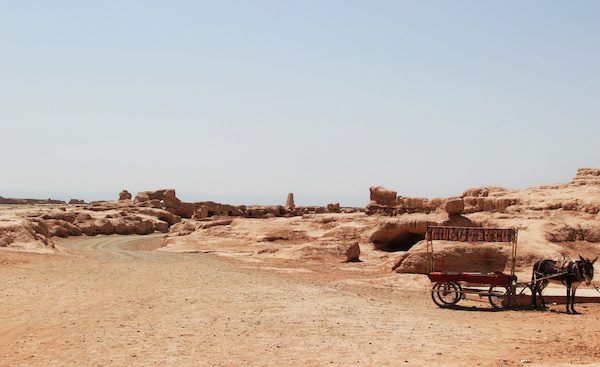 Although the city was left in bad shape, much of the additional destruction happened long after it was deserted. Initially Muslims from outlying areas destroyed many of the Buddhist frescos within the city that depicted human or animal forms, believing them to be blasphemous. Then, over a period of time, local farmers took wall paintings from the temples and soil from the walls of the earthen buildings, as they made good fertiliser. So remember, if you happen to sample any of the locally grown vegetables, you’re quite literally enjoying the taste of Gaochang!

It wasn’t until the late 19th century that the archaeological value of the region was discovered, and soon archaeologists from across the globe flocked to the area to marvel at the ruins. Many of the relics excavated in Gaochang are now scattered throughout museums in London, Berlin, St. Petersburg, and other far-flung cities, but many more still remain within the city’s dilapidated walls.

In its heyday, the city boasted an impressive population of approximately 30,000 people and was undoubtedly one of the livelier towns along the Silk Road. Its colossal earthen walls once towered in at over 11 metres (38 ft.) in height and it was separated into three parts: the outer city, the inner city, and the palace city. The inner city was protected by a secondary inner wall, which has since vanished, but large portions of the outer wall still remain. The palace city at Gaochang’s northernmost point was once arguably its most magnificent edifice, but now contains only the massive cornerstones of the ruined imperial palace.

On top of being a centre for trade, it was once an important religious site and, during the Tang Dynasty, it became one of the foremost Buddhist cities. In 630, while on his pilgrimage to India, the renowned monk Xuanzang even gave lectures there. At one time, the city was host to numerous monasteries, including a Confucian college and a Nestorian church, and over 3,000 monks made a home within its walls. Nowadays all that remains of this illustrious heritage are the ruins of two major temples in the southern part of the outer city. The temple in the southwest still has remnants of a gate, a courtyard, a sermon hall, a sutra[1] depository, and the monks’ living quarters, while the temple in the southeast only consists of a tower and a series of well-preserved murals.

Mummies recovered from the Astana Tombs, just 4 kilometres to the north of the ruins, were discovered to be of both Caucasian and Mongolian descent, which suggests that Gaochang may have been one of the oldest multi-ethnic and multi-religious cities in China. Murals in the nearby Bezeklik Thousand Buddha Caves also depict both Central Asian and Chinese monks. So who knows, you might recognise your great-great-great-great-great-grandfather in one of the frescos!

1. Sutra: One of the sermons of the historical Buddha.