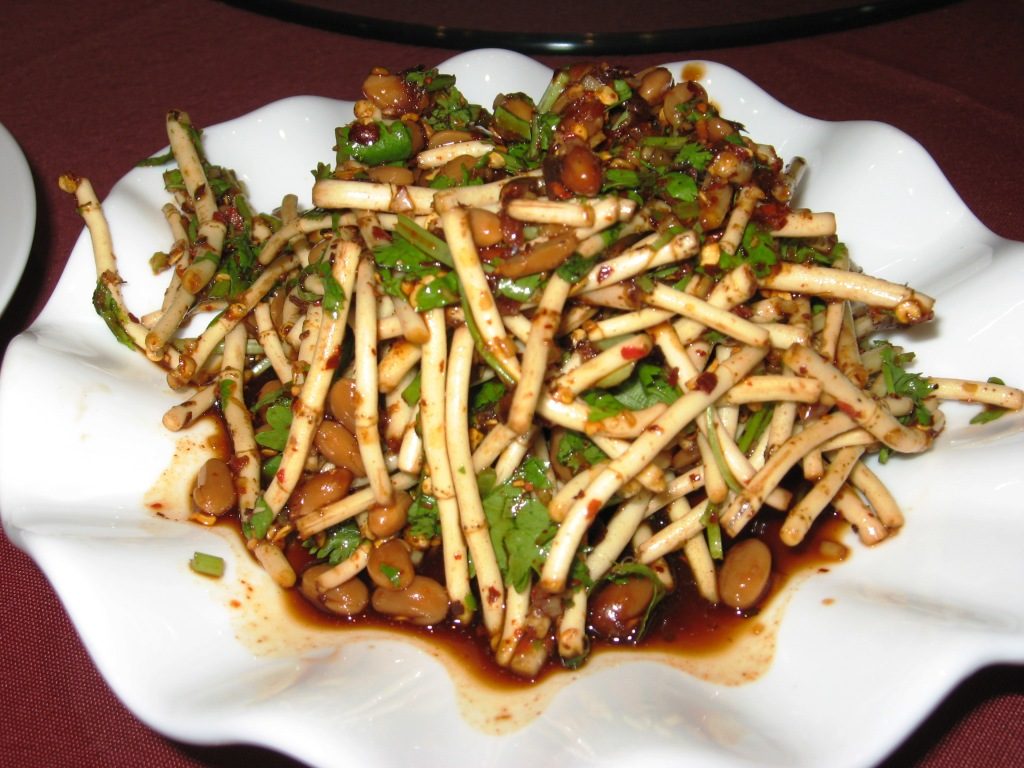 In Guizhou, the local saying goes: “without eating a sour dish for three days, people will stagger with weak legs”. Guizhou cuisine is simply so delectable that the locals believe they can’t go a day without having one of their signature spicy, sour dishes. Guizhou cuisine is similar to that of its neighbouring provinces, Sichuan and Hunan, in that it employs predominantly spicy, peppery and sour flavours. However, the sourness of Guizhou cuisine is different to that of Hunan’s and it is not as potently spicy as Sichuan cuisine. Signature dishes in Guizhou are designed to match the saucy tang of the local liquors, such as Maotai liquor, as the two will often be consumed together.

This style of cuisine is renowned for its use of pickled, salty vegetables called yancai. Many different vegetables can be used to make yancai. These vegetables are dried when they are fresh, without any exposure to the sunlight. After they are dried, they are placed in containers, salted, sealed and then left to ferment for four to five days before they are ready to be consumed. These pickled foods are not only delectable, but are said to have medicinal properties. Guizhou cuisine is also characterised by its liberal use of dried red chillies and salty powered chilli dips. Although Guizhou cuisine differs from region to region, and sometimes from city to city, we’ve include an array of signature dishes from Guizhou that are sure to get your mouth watering.

Like other styles of hotpot, Guizhou Hotpot offers an array of different styles depending on location, including Kaili Fish Hot Pot with Sour Soup and Guiyang Green Pepper Young Chicken Hot Pot. These hotpots are typically peppery, sour and full of dried red chillies to give that distinctive spiciness. The base soup of Guizhou Hotpot is famous throughout China for its unique flavour and tantalising smell. The soup is boiled at the table and then you add raw ingredients, such as strips of beef or tofu, depending on your preference. All of the food is cooked at the table and the soup itself can be topped up throughout the meal. We recommend that, before you start cooking, you get a bowl of spices to dip the food in once it is cooked.

Thanks to Guizhou’s ethnic diversity, it is one of the few provinces in China where cuisine from ethnic minorities can be enjoyed. Sour Soup Fish is a perfect example, as it is a staple dish in Miao culture that originates from Kaili. The soup broth is made of pickled cabbage and pickled chillies to give it a hot sour tang, along with ginger, wild tomatoes, shallots, pepper and a few other vegetables. The liberal use of an unusual Chinese spice known as huajiao, which is made from the berries of the Chinese prickly ash tree, gives the broth a unique flavour that would be unfamiliar to a non-Chinese palate. After the broth is bubbling and the aroma of the soup fills the air, the sweet, clear white flesh of the river fish is added. The river fish used in this dish is always locally sourced and tastes incredibly fresh. You must be careful when eating the fish, as there are many tiny bones in the meat.

Zao pepper is a spice made up of fermented chilli paste that is unique not only to China but specifically to Guizhou province. The dish is made by breading a fresh carp in a mixture made from flour, eggs and salt. The fish is then fried so that it is mouth-wateringly crispy on the outside but fluffy and moist on the inside. After the fish is fried, ginger, zao pepper and water are added to the pan to make the sauce.

Although Gongbao Chicken is traditionally seen as a Sichuan dish, the creator of the dish, Ding Baozhen (1820-1886), was born in Guizhou. Ding Baozhen was an influential official during the Qing Dynasty (1644-1911) and he created this dish to entertain his guests. Once the recipe got out, Gongbao Chicken became so popular that it is now widely available throughout China. The main ingredient, diced chicken, is fried with peppers, sauces, salt, vinegar, ginger, and garlic, although regional variations sometimes include nuts or other vegetables. The dish is distinctly spicy and tastes delightfully fresh.

This noodle dish originated from and was named after the district of Huaxi in Guiyang city. Although this dish may look simple, it is notoriously complicated to make. The noodle broth has an aromatically spicy taste. The dish itself is made from diced beef, handmade rice noodles, coriander, huajiao, chillies, pickled cabbage and ginger. The pickled cabbage is what gives this dish its sour tang. We recommend adding sesame oil or chilli oil to the broth to taste.

Taste some authentic Guizhou Cuisine on our travel: Explore the culture of Ethnic minorities in Southeast Guizhou