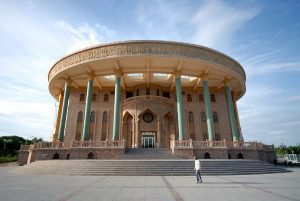 Alternately known as Kumul and historically as Yiwu, Hami is a city of many names! Not only was it once a major trading hub along the northern branch of the Silk Road, it represented the main gateway from which one would leave China and enter the western regions (modern-day Xinjiang). Its strategic importance meant that it was frequently fought over by warring dynasties, and its location at the confluence between ancient China and Central Asia saw it develop under the combined influence of Han Chinese and Uyghur Muslim culture.

The oldest known reference to Hami dates back to the 1st millennium BC, when the city was named Cumuḍa and was occupied by the Yuezhi people. Realising its potential as an oasis and trade hub, the Han Chinese swiftly occupied it and the Han Dynasty (206 BC–220 AD) transformed it into a military stronghold named Yiwu in 73 AD. The Han Chinese ran a lucrative business from the city, using the fertile land to grow food to supply nearby troops and passing trade caravans. Its value was soon recognised by others and, throughout the late Han Dynasty, it would frequently change hands between the Han Chinese and the nomadic Xiongnu people. Relics from this ancient time, including several well-preserved mummies, are currently exhibited at Hami Museum.

During the 9th century, it came under the control of the Uyghur people, but was in turn conquered by the Mongolians during the 13th century. It was during this time that the city was visited by the famous Italian explorer Marco Polo, who knew it under the name Camul. When the Mongol-led Yuan Dynasty (1271-1368) fell to the Ming Dynasty (1368-1644), it was annexed by Gunashiri, a descendant of Chagatai Khan, who founded his own small kingdom called Qara Del but who ultimately answered to the Ming imperials as a vassal state. By the late 17th century, it had been conquered by the Kumul Khanate (1696–1930), although it remained a vassal of the Qing Dynasty (1644-1912) and eventually the Republic of China (1912-1949). In short, Hami was passed around more often than a hot potato! 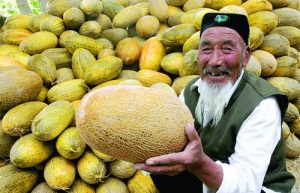 Nowadays it is famed for the sweetness and quality of its locally grown fruit. In fact, the muskmelons that come from Hami are held in such high esteem that the Chinese name for this type of melon is simply “hamigua” (哈密瓜) or “Hami melon”. To the city’s north lie the Tian Shan Mountains, while its east and west are flanked by hostile desert. Like a flower blooming in the barren sands, this is what makes Hami and its fertile terrain so special.

The region is served by an arid continental climate, with extreme differences between summer and winter. July temperatures can easily exceed 26 °C (80 °F), but plummet to around −10 °C (13 °F) in January. Vast differences in even daytime and night-time temperatures have given rise to the local saying: “People in Hami wear a fur-lined jacket in the morning and very thin clothes at noon, while at night they eat melons around a warm stove”. In this city, the locals are always blowing hot and cold! 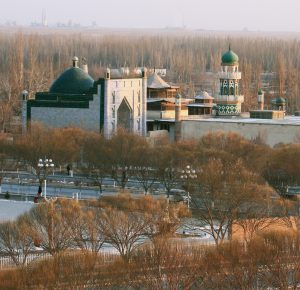 The ancient Tombs of the Uyghur Kings of Hami lie approximately 2 kilometres (1 mi) south of the city proper. This grand mausoleum was built in 1840 and honours the Uyghur kings who ruled over the region during the Qing Dynasty, along with members of their royal families. The tombs are largely constructed in a traditional Islamic style, although they retain some uniquely Chinese features. The most prominent is the tomb of King Boxier, the 7th King of Hami, which towers in at 18 metres (59 ft.) in height.

From spooky tombs to singing sands, Hami is located just 70 kilometres (43 mi) from Mingsha Hill. “Mingsha” or “Singing Sands” Hill is actually a collection of tall sand dunes that boast a fascinating natural phenomenon. When people slide down from the hilltop, the reverberation of the shifting sands produces a strange sound that makes it seem as though the dunes are singing. According to one rather morbid legend, these sounds are the plaintive wails of the female military general Fan Lihua and her 72 soldiers, whose corpses were buried under the sand. So be sure to watch where you step, or the singing sand dunes might have you screaming!