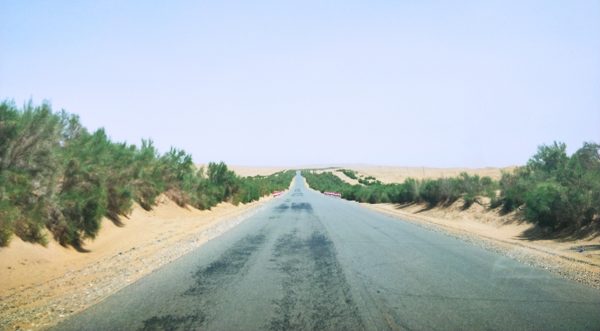 The Tarim Basin may seem like a simple geographical phenomenon, but there’s more to it than meets the eye. Covering an area of approximately 1,020,000 square kilometres (390,000 sq. mi), it stretches over more than half of Xinjiang’s territory and is often referred to as Nanjiang or “Southern Xinjiang”, with the northern half of the region being known as Dzungaria or Beijiang. To put that into perspective, it is nearly twice the size of Spain and three times the size of Germany! Its northern boundary is marked by the Tian Shan Mountains, its southern boundary is skirted by the Kunlun Mountains, and its centre is dominated by the hostile Taklamakan Desert.

Historically, the region was known as Altishahr, which translates to “Six Cities” in the language of the Uyghur people. This was in reference to ancient oasis cities such as Kashgar and Turpan, which rested on the outskirts of the Tarim Basin and played a focal role as trading hubs along the Silk Road. The area may seem inhospitable now, but a startling archaeological discovery proved that it was once a cradle of civilisation. At the beginning of the 20th century, famed explorers such as Sven Hedin, Albert von Le Coq, and Aurel Stein ventured into the basin and recounted how, in their quest to unearth historical relics, they’d uncovered a number of desiccated bodies. They would soon come to be known as the Tarim Mummies, and would play an invaluable role in discovering the history of the region. 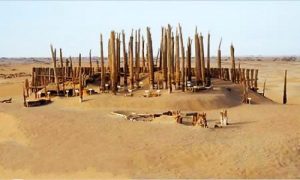 The vast majority of the mummies were found either on the eastern end or the southern edge of the Tarim Basin. The oldest date back to approximately 1800 BC and, more fascinating still, they are of Caucasoid origin. The extremely arid climate of the desert means the bodies have been beautifully preserved. For example, the famed “Cherchen Man” still boasts his locks of luscious red hair, in spite of having died over 3,000 years ago; the “Witches of Subeshi”, who passed away sometime between the 4th or 3rd century BC, can still be seen with their black felt conical hats; another body found in Subeshi betrays the first potential signs of surgery, as an incision in his abdomen has been sewn up with horsehair; and several bodies have clearly visible tattoos.

The mummies share a number of physical features, including elongated bodies, angular faces, recessed eyes, and blond, brown, or red hair, which are all associated with the Caucasian ethnic group. Modern-day genetic testing appears to confirm this conclusion, since many of the ethnic groups that are native to Xinjiang, such as the Uyghurs, Kazakhs, and Kyrgyz, exhibit both East Asian and Caucasian DNA. Many researchers have speculated that the Tarim Mummies may belong to the Tocharian ethnic group, which were described as having full beards, red or blond hair, deep-set blue or green eyes, and long, aquiline noses. While many of the mummies are now displayed in museums throughout Xinjiang, the mystery they leave behind continues to both plague and delight historians.

In its time, the Tarim Basin has fostered the growth of numerous ancient kingdoms, including the Loulan, the Kucha, and the Khotan. Alongside the Silk Road, it was these multifarious kingdoms that facilitated the dissemination of culture from Central Asia and India into China, most notably the introduction of Buddhism and Islam. Unfortunately the native rivers were deeply temperamental and changes to their course would cause lakes to move, which in turn would necessitate alterations in the routes of the Silk Road. Imagine trying to navigate all of those road closures without a satnav!

The greatest example of this was the desertion of the middle route, which was established during the Han Dynasty (206 BC–220 AD) and ran through the centre of the Tarim Basin towards the lake of Lop Nur. The gradual desiccation of the lake led to the decline of the oasis city Loulan and the collapse of the Loulan Kingdom, which in turn forced travellers to abandon this route from the 6th century onwards. The Tarim Basin was a place of blessing and curse, simultaneously welcoming certain ethnic groups and causing devastation to others.

From the 7th century until the late 8th century, it was a hotly contested region, frequently changing hands between the Tang Dynasty (618-907) and the rival Tibetan Empire (618–842). With so many valuable trade routes, it seemed everyone wanted a piece of the Tarim Basin! By the 9th century, the collapse of the Uyghur Khaganate (744–840) resulted in hundreds of Uyghur immigrants flooding into the region. While researchers believe the Uyghurs were still predominantly Buddhist at this point, Islam was introduced and became the dominant religion when the Muslim Turkic peoples of the Kara-Khanid Khanate (840–1212) conquered the western Tarim Basin at the start of the 11th century. It wasn’t until 1884, under the Qing Dynasty (1644-1912), that Dzungaria and the Tarim Basin were finally combined to form Xinjiang. To this day, they remain two distinct regions with their own cultures, histories, and unique personalities!